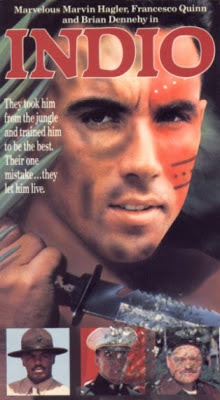 
Somewhere deep in the jungles of South America (the film was shot in Argentina, Borneo, Brazil and the Philippines) a businessman named Whytaker (Dennehy) is disrupting the local indigenous population and bulldozing their huts attempting to get to a mine. When it spirals out of control and people start dying, Daniel Morell (Quinn) gets involved. Morell is the son of an “Indio” chief and an American woman. Just how that odd couple got together is never explained.

Morell just happens to be a highly-trained Marine, and when he goes into “fight” mode, he whips off his shirt, dons some war paint and feathers, and begins making life miserable for Whytaker and his team. So Whytaker brings Morell’s old Marine instructor, Jake (Marvelous) (he legally changed his name to Marvelous) to the remote location in the hopes that he can stop Morell. That’s really just the beginning of the showdown in the jungle. What will happen?

Indio is one of the better jungle films we’ve seen to date. We won’t call it a Jungle Slog, because there’s really nothing sloggy about it. Of course it’s Italian-made and directed by the great Antonio Margheriti, and by ‘89 the Italian obsession with jungle-set movies had led them to make more mainstream jungle fare, having gotten the gore and weirdness out of their system with items like Deodato’s Cannibal Holocaust (1980) and Jungle Holocaust (1977). So it was back to the jungle again, but this time a wider audience can appreciate the not at all First Blood (1982)-like stylings of Indio. The presence of Brian Dennehy in First Blood and Indio is surely a coincidence... 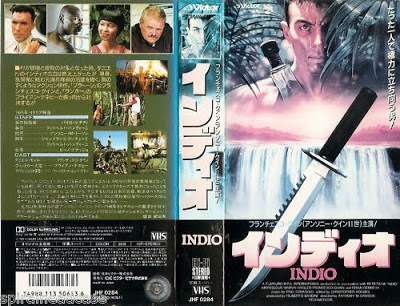 Of course, as soon as the movie started we were on Marvelous Marvin Hagler watch, and he doesn’t appear until 44 minutes into the film. But once he appears, things improve. And they weren’t even bad to begin with. As Jake, the Vietnam vet who is adept at playing the pan flute like an angrier, tougher Zamfir, Marvelous steals the show.

Of course, it’s hard to match Brian Dennehy, who always delivers. He even says the classic line “We got company!” in the first five minutes. Just why Whytaker’s company is out in the middle of the jungle, and why a local Indio can join the U.S. Marines, may seem confusing at first, but eventually everything falls into place. The plot, the structure, and the fact that everyone is always calling Morell “Half-breed” will remind viewers of the Fabrizio De Angelis-directed Thunder trilogy.

Morell (played by Olivier Gruner lookalike Quinn) pretty much does what MacGyver would do if he were trapped on Gilligan’s Island: he makes bombs from coconuts and other weapons out of jungle items. He’s also handy with a blow gun, and thanks to one of our favorite things, repeated footage, we get to see him aim his bamboo stick at us, the audience, more than once.

There’s also repeated footage of bulldozers taking down huts. None really explode, but there are some other things that blow up, including a helicopter. There are also the classic waterfall shots, shirtless natives, and machine gun shooting we all know and love. But Margheriti and the cast make it all work on a level that improves upon all the jungle flicks that came before it.

While it could have used a song, that’s really our only minor quibble with Indio, which remains one of the best jungle outings we’ve seen to date. No wonder there’s a sequel.

Comeuppance Review by: Ty and Brett
Posted by Ty at 9.7.13

Got the VHS and the sequel - VHS too - with Charles Napier. The movies are simply called Indio and Indio 2.

This sounds like a good one. I'm going to have to track it down for my site as it's got an exploding helicopter in it.

Thrown in Anthony Margheritti (who's has got an impressive record of including exploding helicopters in his films) and Brian Dennehy (love that guy) and Marvin Hagler it's simply too much to resist.

I'm on this one big time.

Thanks for shining a light on it.

You're welcome! This is a blast to watch. Looking forward to your take. Solid helicopter explosion.

One of the best helicopter explosions is in the movie Striker with Frank Zagarino.

You have to see Indio 2. This one's good but the sequel is better in every way: more violence, more action, more exploding helicopters. Quinn isn't in it, Hagler is the star instead and he's great. When the bad guy asks why he is fighting for the natives, Marvelous answers "because I'm black, motherf**er!" Classic stuff.

Haha! That sounds awesome. Will definitely buy a copy soon.

Thanks! You're welcome. That's amazing you got to work on this movie. Must of been a blast. Any other stories?

Rest in peace Marvin Hagler..Im from Brockton Mass and with a heavy heart just the champ has passed away..

It's sad he passed away. It was fun to see him in Indio and the sequel, Indio 2: The Revolt.