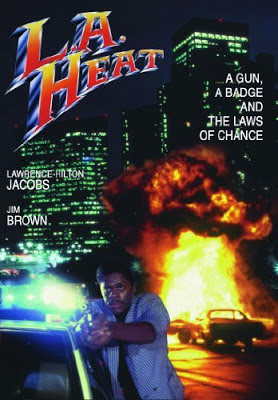 Detective Jon Chance (LHJ) is an L.A. Cop On the Edge. Putting him even closer to the edge is the fact that a particularly evil drug dealer named Clarence (Benton) is running around murdering cops. Among the police officers that this particular scumbag has killed was Chance’s partner Carl (Inneo). So while Clarence goes on the run, Chance tries to track him down. Using a small-time drug dealer named Spyder (Thoroughgood), Chance gets ever closer.

But mob boss Sylvio (Gallo) has inserted himself in the whole affair, and when Chance gets suspended from the force by Captain...well, just Captain (Brown), Chance is adrift, and is troubled by unpleasant dreams. Chance wishes he could go back to the Old West and dispense justice the old fashioned way. But as it stands, he must avenge his partner, get his old job back, catch Clarence, and stop drugs and gangs from proliferating in his own backyard, all single-handedly. Can he do it? Or will he succumb to - or become - the L.A. Heat?


We’ve seen so many PM movies by this point, we’ve come to memorize the credits. All the names we’ve come to recognize are on board. While this is the third in the series of four Jon Chance films for PM - the others being L.A. Vice (1989), Angels of the City (1989), and, of course, Chance (1990) - not forgetting that Quietfire (1991) is not a Chance film, it is quite impressive LHJ portrayed Chance in three feature films in 1989 alone. No wonder we’re always extolling the virtues of that great year for video stores.

While it remains lost in the mists of time whether audiences actually demanded more Chance material, or PM just pumped ‘em out regardless, all it does is highlight the fact that 1989 was probably the single greatest year for video stores. You had selection out the wazoo, and four “Chance”s to win.


All that being said, it’s now time for a brief reality check. L.A. Heat is the weakest of the Chance outings. While it starts strong, somewhere around the midpoint it just runs out of gas. LHJ’s performance, dream sequences, and sport coats are all top-shelf stuff, but it’s almost as if the filmmakers lost interest halfway through the production.

If Chance had more goons to fight along the way, a more clearly-defined villain, and a little more energy, L.A. Heat could have been more of a winner. PM would certainly learn, grow, and refine its action style in the ensuing years. Let’s not forget this was an early production from them, so we won’t judge it too harshly. But it’s hard to escape the fact that its cheap, rock-bottom budget hampers matters.


Some items in the formula PM would never change, such as cops being shot, and Chance having at least one other name to play off of (such as Dan Haggerty, William Smith, or Jim Brown). Speaking of Brown, he’s as unintelligible as usual, but that’s why we love the guy. No director’s going to tell him not to mumblewhisper, and out of all the Jim Brown movies we’ve seen over the years, we’ve probably been able to understand about fifteen words total.

Of course, there are all the funny cop cliches we all know and love, the sax on the soundtrack, and a news reporter who, as a station identifier on her microphone, uses a beer koozie written on in marker. One of the better aspects of the movie is the title song by Jastereo Coviare, which the credits tell us was remixed by LHJ himself. Was there no part of this production he wasn’t involved in? He truly is a renaissance man who gets little credit in life.


The song, rather than being used solely at the end, should have been blaring during a training sequence. That was a missed opportunity. Something funny about the DVD, also, is how the swear words are dropped out of the audio. Was this meant to be a pilot for a TV show? And if so, why is all the violence and almost-nudity all intact? But it all adds to the absurd fun. In fact, the “censored” DVD is so funny and unusual, it ended up being one of our favorite aspects of the whole L.A. Heat experience.


In the end, Chance fans (and there are Chance fans, we assume) will want to see it to complete the Chance phenomenon, and truth be told it’s not that bad, but still, other Chance movies are better.

With L.A. Heat I completed my Jim Brown-Collection (German versions).

Your idea about this being a TV pilot is interesting. A few years later, PM actually made a TV series called L.A. Heat. Maybe all four Chance movies were supposed to be part 1 & 2 episodes in a TV series? My version of this movie, UK DVD, has very badly edited sound effects. For example, when the doorbell is rung, we hear a voice saying "doorbell" instead of hearing a ring. Additionally, sometimes lines are said twice, first by someone else, then by the character, as if someone off camera is reminding the actor of the lines.

The most likely reason the swear words were bleeped out of the version you saw were that the DVD company used an edited-for-TV print instead of getting an uncut print.

That is odd of PM.

I watched the DVD version side by side with the version availible on Youtube(and Amazon Instant Video) and I noticed there was an entire scene removed near the end, after Clarence murders the two people you probably noticed an abrupt jump to Chance talking with the captain, well before that there was a scene with him dragging in the the guy who was trying to get out of paying 100 bucks, the guy is constantly swearing at Chance(which i'm guessing is why it was cut), who smacks him into a wall and then tosses him in the cell, then the Captain yells at him to shut up, saying he runs a quiet jail(too bad that was cut as it was pretty funny). Part of the conversation between Chance and the captain was also removed where Chance goes on about how he feels lost without his job and needs to get it and his dignity back.

Wow very weird about the edits. Hope one day they release an uncut version.

I believe the VHS version actually is uncut.