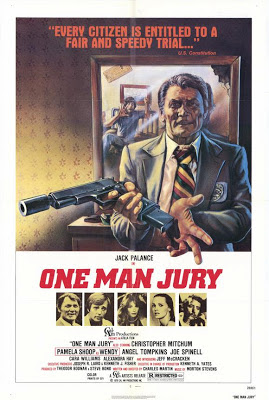 Lt. Jim Wade (Palance) is an L.A. Cop On The Edge who hates scum. Imagine if a John McCain/Clint Eastwood-type (hmmmm....) grumpy older man who continually told the neighborhood punks to get off his lawn not only had a gun and a badge, but teaches police school at night! His partner is Sgt. Blake (Mitchum) and together they’re hunting for a serial killer plaguing the city known as “The Slasher”. In order to get closer to The Slasher, Wade makes some underworld dealings, mainly with gangster Abatino (Spinell). But Wade is tired of the legal system that gives both serial killers and gangsters slaps on the wrist, so he takes the law into his own hands and becomes a ONE MAN JURY.

Now this is what 12 Angry Men (1957) should have been! Just One Angry Man. But in all seriousness, this is a decent-enough cop drama that will entertain you throughout the majority of its running time. It’s great to go back to the days when cops had wide ties, three-piece suits and smoked cigars anywhere they pleased. In many ways, One Man Jury is kind of old-fashioned...it plays as if an older director, whose career goes back to the 1940’s,  was asked by a production company to make a Dirty Harry (1971) knockoff. And indeed, this was writer/director Charles Martin’s last movie, dying a few years after its completion. None of this is meant to come off as negative, One Man Jury is still worth seeing.

Plus it’s great to see Chris Mitchum and Jack Palance team up as cops. Especially when they’re chasing after the great Joe Spinell, a Comeuppance Reviews fan-favorite actor. Pamela Shoop plays the classic liberal counterpart to Wade as well as his love interest, and Angel Tompkins appears for a few short minutes. Jim Wade truly was the Marion Cobretti of his day. Based on his love of crime statistics, anyway. But truly the star of the show is Palance. Here we must quote from the back of the Star Classics VHS box (keep in mind this is on the back of the box - pretend you’re in a video store in the 80’s and you want to know the plot of this movie):

“Jack Palance is one of the very few talents who has the capacity to convey the full spectrum of emotions in this film. At six foot four, two hundred pounds, features chiseled in solid granite, and a soft, yet threatening-as-thunder voice, he’s everyone’s image of what an uncompromising avenger should be.”

Well, now that you know Jack Palance’s weight, that should firmly convince you to see this movie post-haste. But One Man Jury is one movie that has the guts to have the message of “violence IS the answer!”

So if that floats your boat, and we’re guessing that if you’re reading this site right now that it does, One Man Jury should fit the bill. But be advised that it’s not very “extreme” - a lot of its charm comes from its old-school ways.

Also check out a review from our buddy Keith at The Unknown Movies!
Posted by Ty at 17.7.13

Great review! Never heard of it but now I'll try to track it down!

Thanks! It's definitely worth watching.

Jay-zuz! you must have an enormous vhs collection

I've seen some scenes before like when he confronts the weirdo, palance is great, will look out for this gem

The world needs more height and weight specified cops with a no nonsense approach!

Anoymous: Haha! The 1989 classic One Man Force has height and weight on the cover too.

4, only. I'm not a VHS collector. Luckily, I have a few friends that are even more cinephile than me. close to 300? I imagine most was collected before the DVD era?

Yes...mostly towards the beginning (and end) of the DVD era...was lucky to find stores in CT that stocked a ton of VHS just a few years ago.