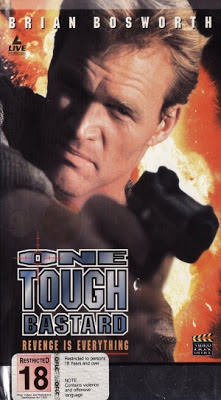 AKA: One Tough Bastard

Sgt. John North (The Boz) is an Army drill instructor and close-combat specialist. But he also has a sensitive side. He loves his young daughter and wife and would do anything for them. When his loved ones are tragically murdered by professional scumbag Marcus (Kober) and North is put into a coma by sustaining multiple bullet wounds, his life spirals out of control.

Upon regaining his consciousness, he devotes his life to revenge. As he climbs up the baddie food chain, he finds Karl Savak (Payne), a long-haired, nose-ringed corrupt Federal Agent, and the villain of all villains this century, M.C. Hammer. Actually he has the classic bad-guy name of Dexter Kane, but it's still, of course, the Hammer we all know and love. Gumming up the works of North's revenge mission is 12-year old tot Mikey (Guy) who always seems to be in the wrong place at the wrong time. Despite the presence of Mikey, will North achieve his mission, especially with the odds stacked against him?

Here's some imagery for you: a bowl of hearty soup with a fly in it. A rich, creamy cheesecake with a cockroach on it. A succulent deluxe lobster with a rat on it. All potentially lovely food items, but you cannot eat around the fly, cockroach or rat. One Man's Justice (or totally badass alternate title One Tough Bastard) is like that. All the scenes with The Boz are gold. The fight scenes are fun, the baddies are nice and bad, and The Boz is on a revenge mission in L.A. All seems right with the world.

But when are filmmakers going to learn that red-blooded males who watch action movies don't want to see precocious brats preventing roided-up meatheads from exacting brutal, violent revenge? To put it another way: we hate when kids play too prominent a role in action movies. There are exceptions to every rule, of course, as Sarah Dampf, Smith, Lisa Boynton, and the cast of Double Blast (1994) prove, kids aren't ALWAYS bad. But the presence of the Mikey character here prevents One Man's Justice from being all it can be, much like Sgt. John North would want you to be in the Army.

So, while they should have edited out Mikey and added some more fights, car chases or even a test pattern, let's leave that aside for a moment. One Man's Justice is classic 90's. That's a good thing, by the way. The cast is excellent, with Boz doing a stellar job, plus favorites Kober, playing a bad guy as always (you know he's evil because he wears a leather vest), Bruce Payne hairing it up, and a rare dark-haired Neal McDonough making a brief appearance.

We've also got Robert LaSardo in the tattoo parlor fight sequence, and, in what has to be a cinematic first, both M.C. Gainey and M.C. Hammer together in the same movie. M.C. Hammer is even billed as "Hammer", perhaps so he wouldn't be confused with the rap career of Gainey. While in The Peacekeeper (1997), Montel Williams teamed up with Dolph, here, The Boz and Hammer are at odds. We'll give you a moment to unravel that last sentence. Mr. Hammer gives us his full acting range, even showing us sad Hammer, or, as it's known, Sammer. 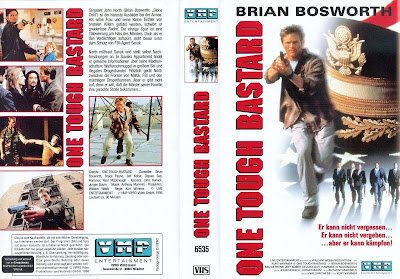 The 90's-ness of it all comes through insofar as all the time Mikey is involved, the movie devolves into a cross between Cop and a Half (1993) and one of those classic anti-drug PSA's from back then. At any moment you think some drugged-up bugs are going to come out from behind a wall. Then it swerves into Homie Movie territory, but Jeff Kober is the lead homie. It's all very confusing. It tries to be relevant, commenting on the trend of mugging people for their sneakers. And the fact that Mikey looks like Mac Dad from Kris Kross firmly places this movie in its 90's place and time. The soundtrack, in the relevant places, features rap from UGK and Kool Moe Dee.

The original North (1994), John North is a man you can believe in. Fun fact about Brian Bosworth's career: much like how Tony Danza strictly only plays guys named Tony, Bosworth mainly plays guys named John. In Stone Cold (1991), he was John Stone, in Blackout (1996), he was John Gray, in the TV series Lawless, he was, awesomely enough, John Lawless, and of course today we have John North. One Man's Justice is perhaps the second-ultimate Boz movie, after Stone Cold of course.

He was born to be in B-grade action product, and you can tell from the many training sequences that this is truly in his wheelhouse. The movie has some of our favorite cliches, such as when, during the climax, the baddie says the hero's name many times, and the all-time classic "you just couldn't let it go, could you?" speech.

We loved all the non-Mikey scenes in this movie. His presence is just too prevalent and inappropriate here. I mean honestly, what is this, One Tot's Justice? But just as you cannot eat around the offending vermin in your food, we can't just watch around Mikey. Your enjoyment level of this movie will depend on your tolerance for children in your action movies.

Also check out write-ups by our friends, DTVC, The Video Vacuum, and  Cool Target!

Brian Bosworth and MC Hammer in the same film. Why does no-one do casting like that today?

Got all his movies from "Stone cold" to "The longest yard". Most on VHS. "Stone cold" is great, the others okay.
And now he is in movies like Revelation road 1 and 2.

My main problem with this movie was the lack of action. It's quite irritating when a movie is almost good. Curiously, this movie has that strange made-for-TV look.

Harry: Stone Cold is definitely his best movie. Got to love Chains!

I actually didn't mind the stuff with the kids in this film, it helps that the kid who played Mikey was actually a decent actor. Still a get you're point, this is one of my favorite Boz films.

I'm glad you understand and see both sides of the story. That's very fair and balanced of you.

It's true the kid wasn't that bad...but he was unnecessary.