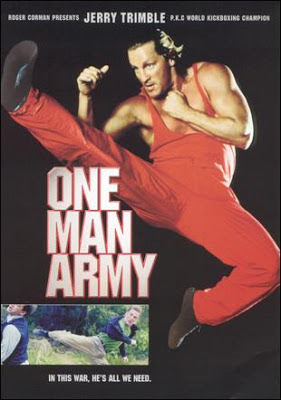 Jerry Pelt (Trimble) is a devoted Martial Arts instructor in the big city, who loves teaching tots how to punch and kick. When he receives word that his beloved grandfather has died, he travels to the country to go to his funeral. Once there, he finds the old town of Johnson City is rife with gambling, prostitution and corruption of every kind. There’s even illegal, underground Punchfighting taking place at the local watering hole. Jerry then teams up with lawyer Natalie Pierce (Moore), his old buddy Eddie (Hayden), and his trusty dog Hank (Yup) and he goes on a crusade to clean up the town. In order to do this, he must defeat Sheriff Boze (Dean), so Jerry runs for Sheriff himself. But it’s going to take all that Jerry Pelt has to save the town, his friends, his dog, and himself from the evil forces in Johnson City. Can he do it?

The man with Sean Penn’s face and Reb Brown’s voice returns for One Man Army, a movie with a storyline that will seem familiar if you’ve seen China O’Brien (1990), or even fellow Cirio outing The Devastator (1985) (among many other possible influences). Because this is a Corman-produced Cirio movie, the running time is only about 75 minutes - and in that time a lot of pleasantly dumb and very silly action is crammed in.

We really like Jerry Trimble, and we felt this movie was better than his Die Hard knockoff Stranglehold (1994). We felt his character, Jerry Pelt (is he like Tony Danza, who contractually can only play characters named Tony because he cannot respond to any other name?) was put in an interesting position: He’s forced to Punchfight, and then wants to shut down the Punchfighting ring once invested with the legal authority to do so.  We don’t think we have ever seen that before.

A dog named Yup plays Jerry’s devoted sidekick (sadly it’s his only credited movie role to date) - and he’s listed proudly among the other actors in the opening credits. At first when you see “And Yup as Hank”, you feel confused, but Yup has a surprisingly big role, and has to do a lot of stuff to help Jerry. His dog acting was impressive, we have to say. Fan favorite Nick Nicholson is on board, pretty much guaranteeing that this movie was shot in the Philippines (not California as we’re led to believe). Melissa Moore is always nice to see - her batting average is pretty high, having appeared in Samurai Cop (1989) and The Killing Zone (1991).

One Man Army is brief, derivative fun from start to finish. It won’t tax your brain or your schedule. Trimble fans need to come out of the woodwork, so here we are talking about one of his mini-classics.

Also check out reviews from our buddies, DTVC , Fist Of B-List and The Video Vacuum!
Posted by Ty at 15.7.13

A Cirio Santiago movie is always good entertainment. I wish Jerry Trimble had starred in more movies. I think this was one of his best efforts. The Bloodfist remake Full Contact is another good Trimble movie. Great review! It's nice to see Yup get his due. Animal performers are generally underrated.

Totally agree. Yup was great...will have to check out Full Contact.

Glad you enjoyed this one as much as I did. Not quite Live by the Fist, which for me is Trimble's gold standard, but a solid contender at the next tier down. The amount of cocaine done by the villains in the movie is astonishing. I've always understood fake movie marijuana to be tobacco, but what does fake movie cocaine consist of? (Especially since it appears the actors are actually snorting it)? Makes a guy wonder.

That was hilarious about all the cocaine use. Trimble is very underrated.

This film and Stranglehold are my favorite Trimble films.

Can't agree more. They were a ton of fun. We're working on getting Live By The Fist and Full Contact.