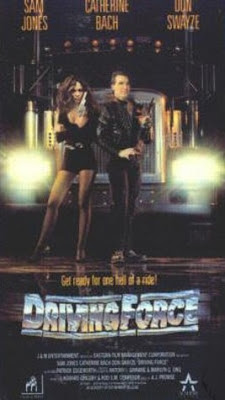 Steve O’Neill (Jones) is a down-on-his luck father. He has a great relationship with his seven-and-a-half-year old daughter Becky (Stephanie Mason, in sadly her only credited role) and they’re kind of seeing each other through the hard times. Steve manages to find a job as a tow truck driver for No Risk Repair, whose motto is “a wreck a day, or you’re outta the way”. So while the hard-working Steve is out there busting his hump, he discovers a cabal of evil, rival tow-truck drivers who work for Black Knight Towing. Why you’d want your towing service to sound sinister remains unknown.

Led by the diabolical hauler Nelson (Swayze), he and his compatriots Surf (Marius)and Pool (Blanks) use the most underhanded and illegal tactics to bring in their wrecks.  While Steve is just trying to defend himself and his daughter from the escalating towing wars, he gets even more on his plate as he constantly battles Becky’s deceased mother’s parents for custody rights. But he has allies in his fight: the pretty and capable (and female) Harry (Bach) and his old buddy Pete (Cook) are helping him out. When it comes to protecting his beloved daughter, what will be Steve’s DRIVING FORCE?

We very much enjoyed Driving Force. We thought the concept of evil tow truck drivers fighting a likable rival driver was pretty original, and Sam Jones has a lot of charisma and screen presence. His onscreen chemistry with his daughter was winning, and the daughter herself was a classic precocious kid of the time, but not annoying.

Plus it was all ahead of its time: now there are many towing-based reality shows on TV. And surely Robert Marius - who has a very impressive action movie pedigree, including Cop Game (1988) - pioneered the concept of “guyliner”. While at first the unusual pace may take some initial getting-used to, once the movie kicks in, going along for the ride is definitely enjoyable. 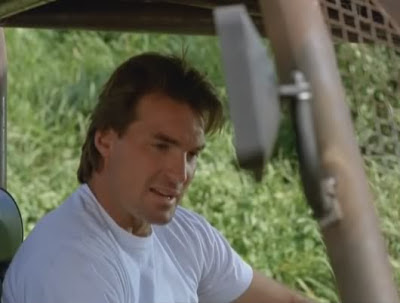 The tow trucks both companies drive seem kind of futuristic, but nothing else in the movie would indicate that it takes place in the future. Don Swayze does a menacing job as the scuzzball Nelson, the baddie with an interesting secret. He and his fellow “tow-goodniks” (I’m REALLY sorry about that) definitely should win employees of the month. They truly care about their job. They really give their all at the workplace.

When most people speak about the works of Billy Blanks, Driving Force rarely, if ever, comes up in conversation. His voice seems about an octave lower than usual, and as one of the main trio of bad guys, he’s not exactly front and center, but let’s not forget about this movie when talking about Billy. 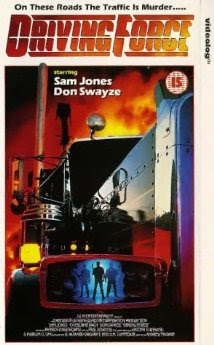 The VHS was released on Academy in the U.S., and a quick glance at the box art shows some seriously pasted-on heads to some seriously unwitting bodies. What was wrong with the original bodies? It’s perhaps even more egregious than the paste job used for Liberty and Bash (1989) - 1989 was a banner year for many things, presumably that would also include incorrect head-body ratios. It’s certainly funny, as funny as some of the dialogue in the movie itself.

The movie - we believe - was shot in the Philippines, but with a largely American main cast. But at least some of the production team was Australian, including the well-known Antony Ginnane, leading to the fact that the legendary, awesome stuntman Grant Page was involved. It’s all behind the scenes stuff, but whenever he’s on board, we’re going to try to mention it, we’re such fans of his.

In the end, we believe Driving Force is a diamond in the rough, whose day of reappraisal has finally arrived.

Can't agree more, this was a solid action film. Happy you enjoyed the Tow-Goodniks bit.