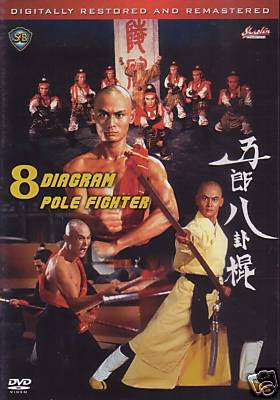 The Yang family are masters at fighting with spears. During the Battle of Jinsha, against the evil Tartars, all the brothers are cruelly massacred except General Yang Wu-lang (Liu), known to his family as “5th Son” and Yang Liu-lang (Fu Sheng), known as “6th son”. When 6th Son returns home, he goes insane after witnessing all the horror and treachery foisted upon him and his family by the evil Pan Mei (Ke Ming Lin). His mother and sisters have to now care for him and deal with his mental illness.

Meanwhile, General Yang goes on a soul-searching quest. Because Pan Mei was once close with the Yang family, even bestowing upon them the honorific title of “Family of Loyalty”, after he defected to the side of evil, he officially became a traitor. Yang, saying, “I can’t go home, and I can’t avenge my country”, is caught in a limbo of sorts and ends up at a remote monastery for Buddhist Monks.

He wishes very much to become a monk, but he keeps being rebuffed by the Abbot, saying he’s too warlike, too angry, too confused, and most importantly, too concerned with worldly affairs. Nevertheless, noting his ability with spear-fighting, they remove the blade and teach him all over again to fight with just the pole.

The ultimate test is to “De-fang the wolf”, using wooden wolves for practice. Now sufficiently trained, he must face off against Pan Mei and his Tartar goons - and reunite with/save his sister - in the ultimate final showdown. 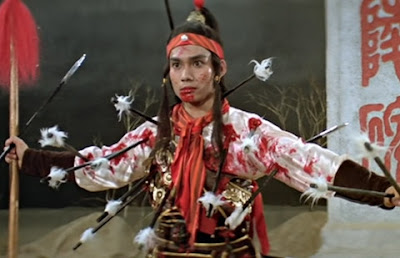 Even though we really don’t review them (hopefully that will change in the near future), we love 70’s and 80’s Martial Arts cinema, especially the output of Shaw Brothers. Eight Diagram Pole Fighter stands out as an excellent, highly enjoyable example of the genre: the sets and costumes are artistically and beautifully designed, the choreography and fighting is superb, and there are plenty of cool battles.

Additionally, fan favorite - nay - HERO - Gordon Liu puts in an emotional, intense performance as General Yang, a troubled man and lost soul - until he finds his purpose in life. This thoughtful performance shows there’s much more to these kinds of movies than just “chop socky”. Plus the plot is accessible to a general Western viewer, without too many cultural idiosyncracies that sometimes make foreign films of this kind hard to understand. Everyone should see this fine film!

Make sure you get the Dragon Dynasty DVD, as there have been inferior quality versions floating around for many years now. This is the definitive way to see this great movie. Because it is so well-shot and even operatic at times, it would be a shame to see one of those horribly pan-and-scanned, dubbed atrocities.

It’s because of those bootlegs (and even many legitimate releases) that Martial Arts movies of this kind get a bad rap. 8 Diagram Pole Fighter can stand with any kind of foreign film. But the snobby crowd will never think to even recognize that. But it’s easy to see why rappers like Wu-Tang appreciate this kind of movie. They were certainly ahead of the curve, as RZA expresses his appreciation for this movie in his book.

Also thanks to the dynamism of the movie, and Liu’s compelling performance, many people stole from it. Just see American Shaolin (1991). Everything from the plot about the guy who desperately wants to become a monk but faces opposition, to the training sequences, was recycled by this and later films. But it’s done so well here, and is so enjoyable to watch, especially with the unique wooden wolves, it’s best to come to the original source.

Great review, Ty! The late Liu Chia Liang is my favorite Shaw Bros. director and this is by far his darkest film. It's a shame Fu Sheng dies midway into filmming as I'd have liked to have seen how it would have gone as originally planned.

Thanks! Would've loved to see that too.