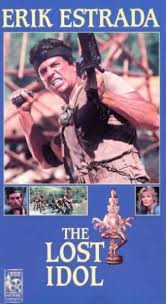 In the jungles of Kampuchea in 1975, 19 soldiers were left behind. While trying to get to Thailand in the hopes of being found, they come upon a cave with a golden statue. Instead of taking it with them, they decide to hide it in the cave and come back to get it later. This whole initiative is spearheaded by the interestingly-named Lt. Oliver Reed (not the actual Oliver Reed, though that would have been interesting).

Many years after the end of the war, Reed decides to go and find the idol, and while he’s assembling the team to do so, he realizes he needs the help of Sgt. Kurt (Estrada), now a civilian living with his wife and daughter on a farm in Thailand. Kurt wants no part of the operation, so Reed kidnaps his daughter and forces him to take part. Now strongarmed into Reed’s expedition, the whole gang is captured by the local army and tortured (in the time-honored Prerequisite Torture sequence). Now everyone is fighting to retrieve the “golden idol” - who will actually get it?

Ah, P. Chalong. We hardly knew ye. He had a great streak as director going in the 80’s with this, Gold Raiders (1984) and In Gold We Trust (1991). The dude really liked gold, apparently. Like Gold Raiders, this is an overlong jungle slog. Sure, the climax of the movie is cool, with all the exploding huts, guard towers, shooting and tanks you could hope for, but by that point it’s too little too late.

But despite the movie’s length, it’s not all THAT bad: for instance, on the bright side it has characters such as Won Ton Gool (?) and Christoph (Kluppel). The line readings/dubbing are great, and there are silly musical stings on the soundtrack. But all in all this movie needed to be sillier even than what it was, and shorter. 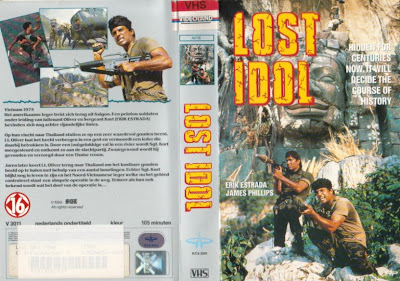 Speaking of Christoph, this hulking, mustachioed brute helps things along nicely. He gets not one, but two great entrances in the movie. Before the prerequisite barfight, Christoph emerges with an especially tiny midget, like a Nelson De La Rosa type. Then again he re-emerges later on in spectacular fashion, but we won’t spoil how he does it here.

And let’s not forget about fan favorite Erik Estrada. Sure, he’s a genre mainstay, but it seems Won Ton and Christoph outshined him here. This movie does have some bright spots, but the length of the movie and uninspired plot work against those better moments like when you push both of your hands together in resistance training.

We presume the rural Thai audiences that saw this movie weren’t as sophisticated as today’s modern viewers, that’s why Chalong included plenty of unmatched day-for-night shots, stock footage and laughable, primitive green screen effects. But we don’t fault him for this, his country most likely just didn’t have the resources and budget for it to be otherwise, and we actually applaud him for getting his movies off the ground despite the odds against him.

Interestingly, The Lost Idol was released on a stand-alone VHS release (on Shapiro-Glickenhaus) and as a double feature tape with the Danny Aiello and Lyle Alzado movie Shock Troop (1990). The “two-fer” tape is much rarer so if you see it anywhere, grab it.

In all, The Lost Idol is decent enough, but really, Erik Estrada is a name that usually stands for better.