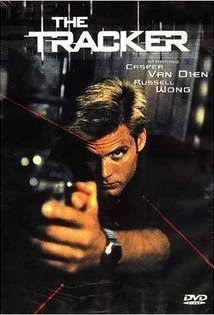 “Mr. Spears has his own way of doing things.”

Connor “Connie” Spears (Van Dien) is a former NYC cop who moved to L.A. to become a private detective. When an old friend who he trained in Martial Arts with, Rick (Wong) contacts him because his sister was kidnapped, Spears agrees to go back to his old New York stomping grounds to try to find her. The plot thickens when it seems she’s caught in between two rival gangs: the Chinese mob and the Malakov family of the Russian mob. Teaming up with the streetwise taxi driver Carmen (Robertson) and old cop buddy Jack “Chick” Cicollini (Blicker), our team of four unlikely heroes hit the streets to try to find the missing girl. Will they find her before it’s too late?

2001, when this movie was released, wasn’t that far from the 90’s in time. Thus, The Tracker fully retains a 90’s feel. It’s standard DTV fare, but it’s professionally made and doesn’t look like junk. While it doesn’t reach the heights of Drive (1997), a movie it seems to be influenced by, it makes a decent one-time watch, mainly because of the Martial Arts scenes with Russell Wong. There’s plenty of other reasonably enjoyable stupidity on display, mainly in the action scenes.  Add a little humor, and there you have it.

Casper Van Dien’s blonde hair and snarky attitude gives him the vibe of Billy Idol. Was that intentional? But because he’s supposed to be the ultimate coolguy, with an answer for everything, that puts him more in the category of being the Zack Morris of action (or Zacktion to those in the know).

Throughout most of the 90’s, and into the 2000’s, having the main character in a movie or TV show spouting sarcastic, ironic retorts all the time became the norm. Somewhere along the line, writers got off the track, and being the likable hero got confused with being the snotty jerk. Van Dien in The Tracker is a perfect example of this. Is he supposed to be likable? We assume yes, but he doesn’t make it easy on us, the viewing public. This “Coolguy-is-a-jerk” phenomenon was a misstep in pop culture, in our opinion. Of course, we blame Sloane (1984) for starting it all. 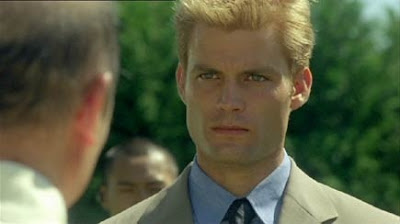 The movie is really nothing more than a compendium of cliches, from the prerequisite torture scene to the abandoned warehouse shootout, but that might be one of the movie’s strengths after all. The Tracker is what people rented in video stores when everything else they intended to rent was out for the evening.

For better or worse, Connor Spears (remember this was the heyday of Britney) did not return for another outing. There were to be no franchises for him. It would have been interesting to see an Indiana Jones and the Last Crusade (1989) kind of thing, where Howie Long plays Casper Van Dien’s father, and they can compete to see who has the squarest head.  So that was not to be, but at least we have this, and we’re all happy about it, right? ....right?

Also check out a review by our buddy Keith from The Unknown Movies!
Posted by Ty at 16.9.13

"The Tracker is what people rented in video stores when everything else they intended to rent was out for the evening."

Or buy when the had "too much money" - like me.

Haha same here. Bought it for two bucks at a video store.

I throughly enjoyed this film and somehow I did Van Dien's character to be somewhat likeable.

Happy you liked it! We thought it could've been a bit better, if only Casper's character wasn't a jerk most of the time. Haha.