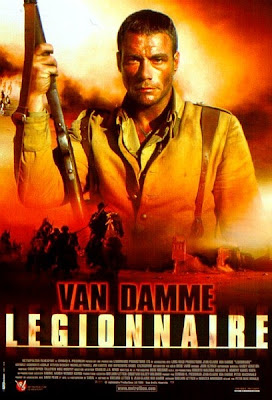 
Alain Lefevre (Guess Who?) is a boxer in Marseilles, France in the 1920’s. When some mobsters ask him to take a dive in the ring, Alain refuses, and the gangsters come after him. In a desperate bid for escape, he joins the French Foreign Legion. Probably because he knows the Legion “doesn’t ask questions about a man’s past.”

Thus, it is something of a ragtag bunch of misfits. Even though the Legion marches and fights hard against its enemy in Morocco, to Alain it’s surely still preferable to being killed by the gangsters that are after him. Unfortunately, some of said baddies enroll in the Legion to find Alain. But Alain also made some friends while serving his time. Will this brotherhood of men with nothing to lose defy all the obstacles put before them? Find out today (?)

Legionnaire is one of the first Van Damme movies to go straight to video (at least here in the U.S.). Sure, it has a professional look and is somewhat glossy, but it’s an old-fashioned war movie - almost in the vein of those boredom-inducing Sunday-afternoon programmers so beloved by the elderly. Why the filmmakers would take that approach is somewhat confusing, until you realize Van Damme probably wanted to break out of his cycle of “beat-em-up” movies and appeal to a wider audience. Unfortunately, this leaves die-hard action fans in the cold, as, yes, there are some battle scenes but almost no Martial Arts. 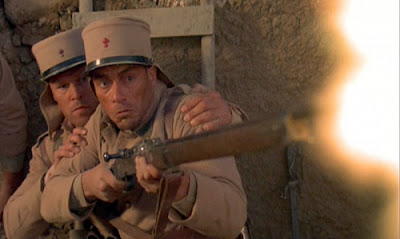 But it does conform to the now-standard Van Damme formula of the time: It was written by Van Damme and frequent collaborator Sheldon Lettich, it’s 100 minutes or more, and features at least one scene of Van Damme nudity. It’s almost like they have not simply a movie script, but a page of check-boxes that must be ticked before the movie can be released. And since it takes place in the past and/or features Van Damme trying to escape his troubles via ship, it can be easily compared to Lionheart (1990) or The Quest (1996). In fact, in Lionheart, he plays a Legionnaire, so Legionnaire could be almost a prequel of sorts.

It could’ve gone to the theater, there’s certainly nothing junky about it that screams “Direct To Video”, but at this point, the action boom of the 80’s and early 90’s was definitely on the wane. Plus, there are no other real names in the cast to help and support Van Damme. But, plotwise, the enemy the Legionnaires are fighting is unclear, and there’s no one strong, central villain to boo and hiss at. In a supposed action movie, that’s a major problem. Hence, it becomes sort of a morass of unfocused incidents - nothing sticks with you - it’s in one eye and out the other. Nothing much memorable happens.

And while there is some mild Punchfighting at one point, it seems the sole reason Legionnaire was made was to tout the coolness of those awesome hats the Legionnaires wear. Obviously Van Damme wanted to display some national pride (even though he’s not from France) - but perhaps “Legionnaire Hat” isn’t as snappy a title.

If you ever end up in a scenario where you’re going to watch a Van Damme movie with your parents or grandparents, Legionnaire is seemingly made for that purpose.

Also check out a write-up by our buddy,  DTVC!

But does he do the splits in the film? Inquiring minds want to know.

As much as I like Van Damme, I couldn't sit through this one. Good for you for truckin' until the end.

Sometimes I thought it looks like a Van Damme-Version of "March or die" with Hackman/Hill/Deneuve.

This one was pretty low on the action quotient, which made it seem to drag. Nice scenery, though, but this and Nowhere To Run are IMO the worst Van Damme made before his DTV career.

Joe: Haha! No splits in this one. Agreed, this was a tough sit.

Harry: Totally agree, we just wished it was a better. Just too slow and not much Van Dammage.

I expected a bit more from this one. The director's an interesting guy. He hasn't directed many films, but has a seriously awesome CV as a director of photography. One of the few films he's directed is Rambo III which I think is great, so I was kind of disappointed that he didn't do more with this. But then you never know the circumstances behind how he ended up with this gig.

Rambo III is a classic, this was a kind of a dud...Poor Van Damme.

For me Derailed was far more enjoyable then this dreadful slog, it's easy to see why this didn't go to theaters.

This was a tough sit. No action...just boring for most of the running time.

@ In Germany it had its way to theaters. Saw it first on the big screen.

That's cool about seeing this in the theater!