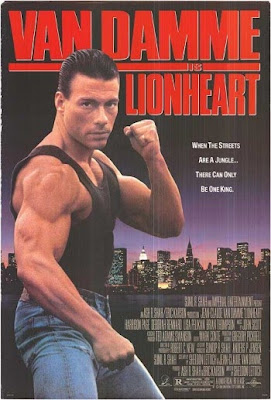 
Lyon Gaultier (Van Damme) is a member of the French Foreign Legion serving in North Africa. When he receives word his brother is in trouble, he asks for some time off, but his superiors say no. So he deserts the desert, stows away on a ship and ends up in New York City without a penny to his name. The problem is, he needs to get to L.A. While walking the streets, he sees an underground Punchfighting match and decides to get involved. That’s where he meets Eldridge (Page), a small-time promoter who takes a liking to him. Through Eldridge, Lyon begins making money through higher-class fights created by Cynthia (Rennard) and Russell (Thompson AKA Yahoots Magoondi). All Lyon wants to do is give the money to his destitute sister-in-law (Pelikan) and her five-year-old daughter Nicole (Johnson). Nicole ends up viewing Lyon as a father figure and loving him.

But, as always, there’s “one last fight” and this one’s a killer: Attila (Abdel Qissi) is a brute favored to beat Lyon. On top of all that, two of his superior officers from the Legion have been tasked to bring him back, one of which is Hartog (Goric of Code Name: Zebra, 1987 fame). Will Lyon be Lionhearted enough to figure all this out?

Devised by Van Damme and frequent collaborator Sheldon Lettich, Lionheart has many of the hallmarks of classic-era Van Damme: it went to the movie theater, it’s 100 minutes or more, there’s at least one scene of JCVD nudity, he punches and kicks a lot of people, and he wears some silly outfits. It may contain all the elements, but it seems something is missing with Lionheart. Maybe it’s that Lyon isn’t that likable, and the lack of overall character development. To be fair, Harrison Page puts in a lot of much-needed energy, and his role is basically the one played by Adolph Caesar in The Hitter (1979) - a movie which clearly laid the groundwork for this. 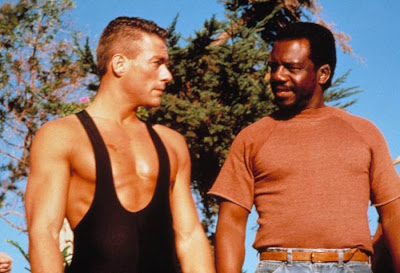 It’s funny, Lyon isn’t in NYC for more than a few minutes before he sees the bumfighting/Punchfighting going on with all the action and people waving their money around. Then again, you have to remember that this was before Giuliani got rid of all the Punchfighting. Once Lyon gets to L.A. and takes on all comers, we see not just poolfighting, but also racquetball court-fighting. I guess something had to fill the space after the 80’s trend ended. It was nice of the Y to allow that. In the poolfighting scene, both fighters are wearing skintight black wrestling singlets, so it’s hard to tell them apart. We can only assume this is the same one Van Damme wore when he was in Breakin’ (1984). The way the whole thing is shot is very reminiscent of the “Schmitt’s Gay” sketch on Saturday Night Live. 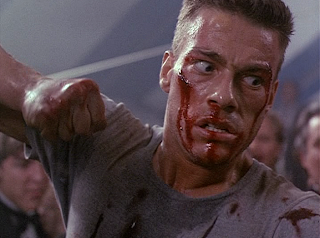 Besides the fact that it’s very dumb, another problem with Lionheart is that there is no one, clear villain. It’s just a series of fighters. Sure, Yahoots Magoondi is here at his Yahootiest, but it’s just not enough. The cast is impressive and they do their best - even Billy Blanks and Jeff Speakman appear in tiny “blink and you’ll miss them” roles. Attila seems to be the closest thing to a main bad guy, but he only shows up in the final minutes of the film. And he’s a dead ringer for Gene Simmons, so it’s hard to take him overly seriously as a guy who will break every bone in your body.

As for the music, there’s some classic 80’s-style sax, of course, and there are musical cues that sound a lot like “There’s No Easy Way Out” and “Eye of the Tiger” - but just barely escape copyright infringement. As JCVD is jogging in a gray sweatsuit no less. No Rocky Parallels there. The end song, “No Mercy” by Bill Wray stands out as a winner in the classic action movie AOR style. It should have been used during a training montage in the movie though, not just during the credits. But there is a shopping montage, and those are always fun.

In all, Lionheart is standard, middle-of-the-road Van Damme. Fans will surely appreciate it, but newcomers to action movies shouldn’t start with it.

Yeah, this is definitely middle of the road Van Damme but it does have a good deal of unintentional hilarity like the aforementioned shopping montage.

I had caught this one again about a year ago. I actually liked it quite a bit because it reminded me of "classic" Van Damme. You're right, it's a very weak story, no clear villain (maybe that evil white chick?), and very stiff acting with no character development. Buuuut, it was very nostalgic for me if anything else. And it was shot competently. I dug it overall. Great review guys!

Jack: There should be a whole movie of Van Damme shopping. Then we can finally know where he gets his wrestling singlets (Breakin').

RobotGEEK: Thanks for the kind words, we agree that the overall plot is weak, but we also realize that Van Damme movies have a lot of nostalgic value for people. Death Warrant has that effect on us. ("I don't play and i don't punk!")

This one was a little dissapointing, though still better then The Quest and Legionaire.

Totally agree, this was more fun than those.

This is one of my favorite Van Damme movies, just a continuous barrage of fight scenes with little character development. It was the first Van Damme movie to play in theaters in Finland, the last one was Maximum Risk. Note: the only uncut version on DVD is the French DVD, which also happens to have English soundtrack and widescreen picture.

Thanks for the info! Didn't know that about Finland.