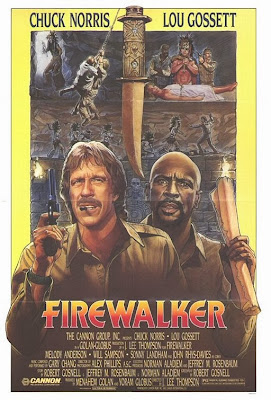 
Max Donigan (Chuck) and Leo Porter (Gossett) are two adventurers/world travelers/fortune seekers who haven’t been having much luck in the treasure hunting business of late. When Patricia Goodwin (Anderson) approaches them and invites them to find the ancient gold of the Mayans (or maybe Aztecs...or perhaps American Indians...we’re not really sure), Max and Leo agree, and off the three of them go into deserts, jungles, caves and other exotic locations, and encountering plenty of perils and pitfalls along the way. Will they get the gold...or will constantly-oiled-up baddie Tall Eagle (Sampson) prevent them from achieving their goal?

Firewalker is an old-fashioned, Saturday afternoon-style adventure film, not strictly an action movie. It’s a PG-rated tale, and Cannon probably figured they should break into a younger demographic. This way they could create new Chuck fans at a younger age. Like a drug dealer hooking them in while they’re young.  Chuck certainly took the opportunity and ran with it, showing off his goofier side. He’s a little less wooden here than he is elsewhere, as he chomps a cigar and generally has plenty of good-natured one-liners at the ready.

His interplay with buddy Louis Gossett Jr. is a highlight of the movie, as they work well together, and Gossett’s charisma helps paper over some of Chuck’s deficiencies in that department. They’re backed up by some solid supporting players such as Ian Abercrombie of Mr. Pitt fame from Seinfeld, the always-great Sonny Landham, and John Rhys-Davies, who puts in a robust performance as a small-time dictator whose accent changes from Spanish to British to Southern throughout his appearance here. Additionally, fan-favorite Branscombe Richmond did stuntwork on the film and has a very brief cameo as well. And, they spell his name wrong in the credits. 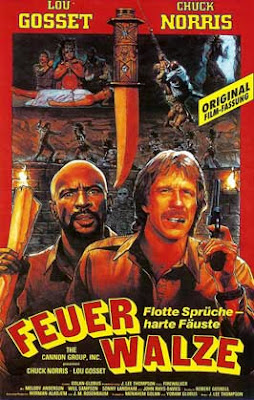 As Leo and Max (aren’t they The Producers? Maybe Firewalker could become a hit Broadway musical) get into and out of their many scrapes, there’s a lot of tongue-in-cheek comedy, silly fight scenes, and supposed Indian mysticism. The enjoyable music by Gary Chang certainly helps this along. Many people have pointed out the similarities between this and the Indiana Jones movies, but another influence seems to be the big, sprawling work of Sergio Leone. But like Gold Raiders (1983) just making the movie lengthy doesn’t mean you’re automatically in Leone territory. Leone can justify longer films. Chuck Norris cannot. It’s not fair, but it’s an ironclad rule of filmmaking. 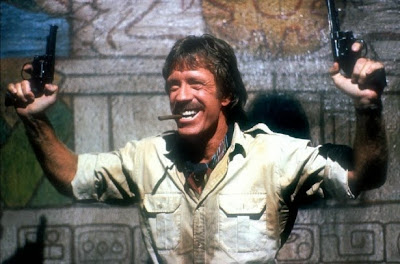 And while the movie is fairly fun and upbeat, it’s just too long and poorly paced. J. Lee Thompson is an old-school director whose career goes back to the 1950’s. We think that accounts for that. He’s known in action circles for his work with Charles Bronson, and he does have a grasp for classic Hollywood-style derring-do. On another behind-the-camera note, Aaron Norris was stunt coordinator here, and one of the stuntmen under his charge was Dean Ferrandini, who would later direct him in the unfortunate Overkill (1996).

Released on the great Media label on VHS in the U.S., Firewalker is harmless, reasonably entertaining, if bloated, and ideal for younger people who display an interest in action.

"And you'll still be bald"... this was one of those movies that, who knows why, my brothers and I re-watched time and time again.

The slo-mo roundhouse kicks in the bar scene are pretty choice.

Your Chuck Norris weeks. I loved them all. But didn't like his later flicks like Forest warrior.

Kev: Loved the roundhouse kicks! More action stars should do them.

Harry: Thanks! Appreciate that. We are definitely not watching Forest Warrior! Haha.

Nice. I just watched this the other day. Not nearly as bad as I was lead to believe. Silly stuff but watchable. An odd change of pace for Chuck. Fun review. Keep the Chuck wagon coming!

Thanks, buddy! We will keep the Chuck Wagon moving until December...then it's time for Godfrey Ho Ho Ho!