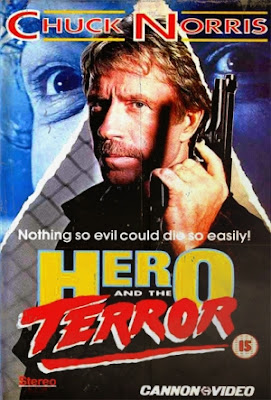 
Danny O’Brien (Chuck) is an L.A. area cop who is still reeling from his encounter with a psychopathic, murderous maniac named Simon Moon (O’Halloran). O’Brien exorcises his demons pumping iron in the weight room. Moon is so scary, he’s been nicknamed “The Terror” by the press. However, O’Brien has also been nicknamed. To the residents of L.A., he’s “The Hero”. Starting to see where this is going? Anyway, Chuck hates his nickname, and  just wants to spend time with his lovely wife Kay (Thayer), who is pregnant. But the Mayor of L.A. (O’Neal) wants results on The Terror case.

So O’Brien calls in his buddy Robinson (James) to help out. The two suspect that the baddie is hiding out in the bowels of the Wiltern Theater, which sets the stage for the final battle. Who will prevail: The Hero or The Terror? Find out today…

Simply speaking, The Hero and The Terror is classic 80’s Chuck. It might not be one of his more talked-about titles, but it’s well worth seeing. It’s kind of like a better version of Silent Rage (1982), insofar as it’s about a psycho killer and Chuck’s chasing him, while doing minimal Martial Arts. If you have to see one of those two movies, see this one.

It’s a quality production: it’s excellently shot, with very nice cinematography, the cast is top-notch, and it all exudes an aura of professionalism. It’s not at all junky, and it would have been very cool to see this in the theater in ’88. 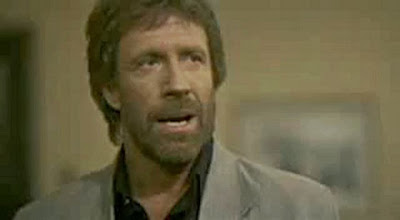 Chuck puts in a great performance, that of a troubled hero haunted by The Terror, while still striving to be a rock of stability and companionship for his wife. Fan favorite Steve James is as charismatic as ever, and is always a joy to watch. He even wears the same WrestleMania hat as he does in McBain (1991). That must make us truly hardcore Steve James fans to notice a detail like that. Ron O’Neal does a decent job as “The Mayor”, and Billy Drago has a glorified cameo as a doctor. Come to think of it, it’s not all that glorified. 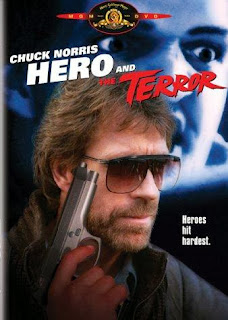 We very much enjoyed the slower pace of this film. Slow pace doesn’t equal bad: bad equals bad. We’re against the notion that MTV-style fast cuts and ADD-afflicted editing should be the standard we all have to now live by. So by that logic if a movie isn’t moving at a breakneck pace, it’s no good? We reject that entirely.

Bring us back to the days when a pace was meant to draw you in and you could get to know the characters. So we applaud director Tannen for that. He went on to be a co-director of Inside Edge (1992), which also featured Branscombe Richmond, as does HATT, as all the cool kids call it (i.e., this movie).

For straight down-the-line and above board Chuck, Hero and the Terror is a great choice.

I liked the first half of this film, but I just found the second half to be way too slow.

Billy Drago's cameo sure is weird. He's not slimy at all!

Haha, Drago is always typecast as the sleazy guy. Steve James stood out in this one.

Been wanting to revisit this one for a looooong time now. I have seen it, but remember almost nothing about it. You've sold me! Great one guys!

Thanks, buddy! Definitely one to catch up on in the future.

I found this one to be pretty mediocre actually, it was way too slow-moving and boring for me.

The pace was slow by today's standards, but still a good movie.

Sad about Paul Walker. He was solid in Running Scared.

Just caught this on Encore last night and I can't believe I've never seen it. I thought this was an effective Norris vehicle which was quality suspense while still retaining all the classic 80's action trademarks. The angle of Norris' impending fatherhood was a strange twist and it was a nice change of pace for the great man. The music was up to par too, with a typically powerhouse AOR theme song at the end. No complaints for me with this. Yes the pace was deliberate, but it wasn't your typical Chuck free for all.

Totally agree, this was a definitely an underrated Chuck flick. Love that AOR theme too.

I'm loving this Chuck-a-Thon! These are great!

Thanks! Happy you're enjoying them! The Hitman is our last one for now...Godfrey Ho Ho Ho starts Wednesday.