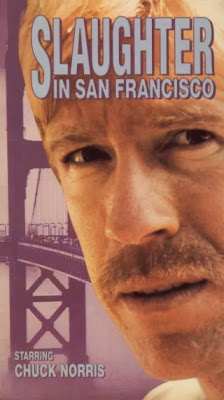 “I only know two kinds of people. Those who obey me and those who die." - Chuck Slaughter


Officer Don Wong (Wong) is a San Francisco cop who is proficient in Martial Arts. Frustrated by the growing menace of gangs in the area, one day all his anger is unleashed and he gets into a big brawl. The brass back at the precinct aren’t happy about this, and he has to turn in his badge and gun, and is actually busted down to waiter, working in, what else, a Chinese restaurant. It’s there he comes into contact for the first time with crime lord Chuck Slaughter (Norris). After Wong’s former partner gets caught up in the crossfire, Wong really has a yen for revenge and goes after Slaughter and his minions. Will his next brawl put him back on the police force? Find out today!

Just so no one gets confused, Don Wong plays Don Wong and Chuck Norris plays Chuck Slaughter. Get it? Slaughter in San Francisco? Heh heh. Now that the formalities are out of the way, we can say what a silly - yet entertaining - movie this is. It’s filled to the brim with big, plaid-centered 70’s fashions, a nice, fuzzy, funky soundtrack with cool drums, and, seeing how it was a very mustachioed time back then, those are on just about every male face as well.

Even though the film is ostensibly American, because it is a Golden Harvest production and everyone (including Chuck) is dubbed, somehow, things get lost in translation. And it’s not just the overdubbed, loud, “classic” 70’s Kung Fu-style dubbing, it’s also the sound effects, like fist and foot blows sounding like someone smacking a cardboard box with an aluminum baseball bat. If someone hits you and that sound comes out of your body, you are in serious trouble. 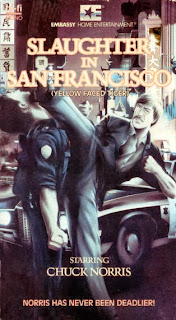 Speaking of things that are over-inflated, the role of Chuck Norris in this movie comes to mind. His role is pretty small, but packaging was retrofitted to make this a Chuck movie after his success. Meanwhile, Don Wong, who is a real Don Juan, gives the Chuckster a run for his money. Additionally, we believe one of the thugs towards the beginning of the film (the guy in the brown leather jacket, though that doesn’t narrow things down much) is none other than Ron Marchini. He’s not credited, but we strongly believe it’s him. Maybe someone out there can help confirm this for us.

Nevertheless, Mr. Norris and his bizarre body hair situation Chucking it up to the soundtrack which sounds like a funky version of the music from NES’ Lode Runner makes this worthwhile, never mind all the other ridiculousness herein. 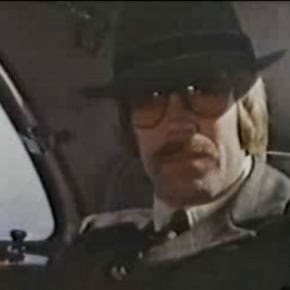 As for buying this movie, the options available are not great. There’s the version, under the title Karate Cop - not to be confused with the Ron Marchini-starring movie from 1991 - that was released on the low-budget label MNTEX, which is unfortunately in EP mode. Then there’s the version on Rhino, under the Slaughter in San Francisco moniker, but that’s a pan-and-scan barbarity. Nevertheless, we’d probably say go with the Rhino version, given the choices at hand.

For Chuck Norris fans and/or those who like their Martial Arts movies on the light and dippy side, only the most cruel among moviegoers would truly dislike Slaughter in San Francisco.

Chuck as Chuck Slaughter; Shut up and take my money! I must watch this!

I completely agree. This is a truly hilarious movie. I have the UK VHS. I'm not sure if it has the same dubbing as your copy, but the funniest moment is when Chuck speaks for the first time...with an English accent! He could have continued his career as Walker, London Bobby.

Snake: There are many versions of this of there, but they all have Chuck Slaughter, so you can't lose.

Roger: Totally agree. Funny movie. Interestingly, our version does NOT have the English-accented Chuck, so that must add yet another layer of funny on to it.

Actually, all the voices in my version have English accents. Different dubbing in the UK and US?

We think so! That would be hilarious to see that version.