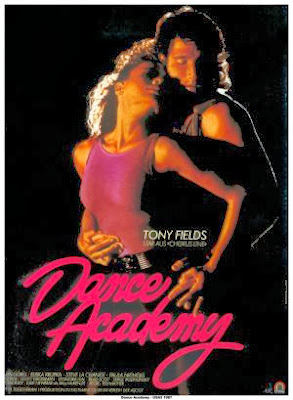 Miss McKenzie (Newmar) and her sniveling sidekick Percival “Percy” Granville (???) run an upper-crust dance and music conservatory. When badass, rebellious dance instructor David “Moon” Bronson (Fields) invades their precious sanctuary with his rogue ways, McKenzie and Percy try a number of underhanded means to force him to leave the academy. Meanwhile, Vince (LaChance) is a guy from the wrong side of the tracks who can’t seem to hold down a job, but he’s a good guy with a passion for dance, so he gets accepted into the academy. He tries to strike up a romance with fellow dancer Jana (Gorg) but naturally it has its rocky moments...will their love survive? On top of all that, Moon and singer/songwriter Paula (Nichols) begin a professional as well as personal relationship, but apparently teachers canoodling with students is against the rules, and Percy threatens to blow the whistle on him. All of this romance, intrigue, and of course, dancing, is all leading up to the big, final performance in front of a huge audience, including the board of directors. Will these hopefuls strut their stuff enough to have a happy outcome? Find out today!

If you just discovered this movie on our site from looking through the archives, you might be forgiven for thinking you had stumbled upon a long-lost Punchfighter. But here at Comeuppance Reviews, we also discuss 80’s dance movies, and Body Beat seems to be a piece of the puzzle left behind by  Breakin’, Breakin 2: Electric Boogaloo, Body Rock, and Dance Or Die. Or, to quote the back of the VHS box (released by Vidmark): “Flashier than “Flashdance”, sexier than “Dirty Dancing”, and more fun than “Fame”, Body Beat is a high spirited delight featuring some of the hottest original music and brightest new talent ever to hit the big screen.” Indeed. All that being said, in terms of it’s “80’s-ness”, Body Beat ranks highly, and despite some filler and some scenes that should have been trimmed down for excessive length, it is an enjoyable outing. 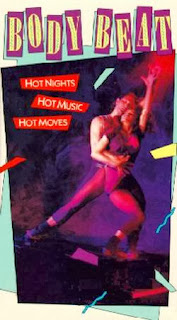 Julie Newmar is decent enough as the stuffy headmistress, Fields plays the Roy Kieffer-like instructor with aplomb, and Paula Nichols is appealing as the Debbie Gibson-like singer. Add to that some great hair and outfits, along with some wacky comedy, and you have this movie. They even found time for the classic Barfight. Of course, the dancing is the main highlight, and the final dance number is very impressive. The music by Guido and Maurizio DeAngelis is quite impressive, but that’s no surprise, they’ve been making awesome music ever since the 70’s. Just check out any of their scores, especially their Poliziotteschi work. And it wouldn’t be an 80’s soundtrack without some blaring sax solos. Not very surprisingly, almost all of the songs on the soundtrack feature the words “love” or “dance” in them. But who’s asking for subtlety?

There are some bizarre moments as well, just look at the scene where a character is trying to teach aerobics to chickens - and the chickens are wearing custom-made sweatpants! Where else are you going to see that? Plus, a male dancer wears a wrestling singlet so skimpy, it can only be properly defined as a “halflet”. Also of note is that Serge Rodnunsky plays one of the dancers, and he later went on to direct Paper Bullets (2000). In movie marquee spottings, we see Crocodile Dundee (1986) was the big box-office hit when Body Beat was being filmed. We can only imagine video store patrons renting Body Beat if all the other aforementioned big dance movies were rented-out at the time. It’s hard to picture a video store-goer in the 80’s consciously choosing this over a myriad of other choices. But if they did, they would find a light, almost inconsequential affair that’s refreshingly inoffensive.

Apparently a sequel was made the next year, called City Rhythms (AKA Dance To Win), but we cannot confirm whether this actually received a VHS release. Regardless, Body Beat is a pleasantly typical 80’s dance-fest.