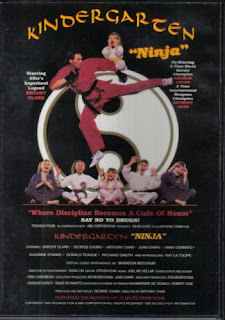 
Blade Steel (Clark) is a man who lives up to his awesome name. A football star for the San Francisco “Gold Rush”, he spends his time being an unrepentant womanizer and alcoholic. But he’s living large, so no one seems to mind. That is, until he gets arrested on a DWI beef. Naturally, we then cut to heaven...yes, the heaven, where Charlie Chaplin and Elvis are just hanging around doing what they do. Apparently, in order for a Martial Artist named Bruce (surely not meant to make you think of anyone famous) to become an official angel, he must help a person in need. And that person is...you guessed it, a starving child in Africa. NO, of course it’s Blade Steel.

Meanwhile, Steel becomes a substitute teacher of sorts as part of his community service for his DWI. Because the tots are obsessed with the then-current game Street Fighter II, he decides to teach them all Martial Arts. But first he needs to learn it himself, so he takes classes with a blind master, named Master Chosen One (Chung). As if that wasn’t enough, evil, Tony Montana-like drug-dealing bigshot Hector Machete (Chapa) is using the community center where Steel and the children are to run his drug operations.

The new drug on the street is Buzz, imported from China, and Machete isn’t happy that the Master, and Blade, are cleaning up the town of San Leandro, CA. So he sends his army of henchmen, which are mostly children, to settle the situation, and local Detective Antonelli (Cerrato) is trying to make sense of it all. What will happen to the...KINDERGARTEN “NINJA”? 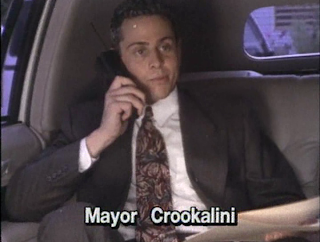 All we can say is...wow. Like all the best films in cinema history, Kindergarten “Ninja” is a co-production between D.A.R.E. and America’s Best Karate. The gold that this unlikely duo produced is exactly what you might expect. The results speak for themselves. The first thing you may notice about this movie is the title, and the fact that the word ninja is in quotes. Try to think of another movie title where one of the words is in quotes. This should give you some indication of the insane originality (or original insanity) of this oddball outing.

Somewhere in the netherworld between a classroom educational film, a home movie, and a professional production lies Kindergarten “Ninja”. Thankfully there are plenty of intentional and unintentional laughs along the way, and the sheer amazement you will feel that not only was this made, but distributed around the world, will sustain you through its (barely) 80 minute running time. 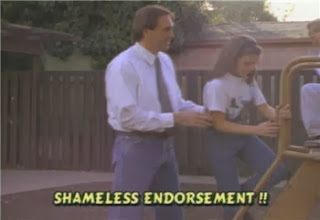 It’s hard to describe in words what the tone and overall feeling of this movie is, but let’s just say “nonsensical” is an understatement. Thankfully, Dwight Clark is on board. The man is truly a powerhouse. He can sing, dance, do Martial Arts, play football, and, most notably, act. Scenes are shot at his own restaurant, Clark’s By The Bay. (The main scene there is truly a show-stopper). Not to be outdone, the great George Chung plays Master Chosen One.

We absolutely loved his Hawkeye (1988), and Kindergarten “Ninja” just reinforces our fandom. Chapa as Machete is also worth noting, but all the non-actors here steal the show. Especially the kids. Where are they today? And the man who introduces the movie, San Leandro Police Chief Robert Maginnis, what does he think today of the movie? Has he ever seen it?

The vast majority of the film’s running time is taken up with endless training sequences. Though the musical stylings of one Joel McKellar are inspired by Over the Top (1987), the amount of time spent on watching Dwight Clark do ab crunches with George Chung is, well...over the top. But if you want to be a master playboy like Blade Steel, just learn from his classic pickup lines. His ace in the hole seems to be “Do you like French fries?” so feel free to try that one.

Despite the film’s unusual nature, it still ends with the time-honored warehouse fight (though we’ve never seen one quite like this), and, to give you a sense of the level of intelligence at work, the mayor of the town is named, and we quote, Mayor Crookalini.

We guarantee you’ve never seen a movie like Kindergarten “Ninja” before. The only question is, do you want to? It can be found dirt cheap most places it is sold. If you have a sense of humor and a taste for the odd, we give it a solid recommendation.

I can't help but picture someone doing air quotes everytime.