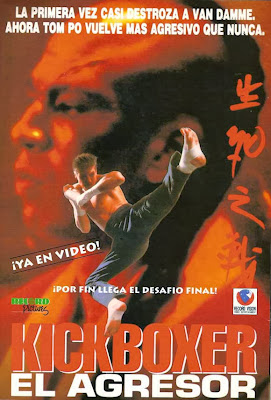 
At the start of this installment of the Kickboxer franchise, we learn that the dastardly Tong Po (Krifa) has framed David Sloan (Mitchell) and sent him to prison for a crime he didn’t commit. As if that wasn’t enough, Po kidnapped Sloan’s wife. The DEA then approaches Sloan with an opportunity to get Tong Po: enter his underground Martial Arts tournament under an assumed name and take him down from the inside. Sloan agrees, mainly so he can find and rescue his wife.

So he goes to Mexico where the tournament is being held, and he ends up meeting a spunky female fighter, Megan (Krasnoo), but also has to contend with Tong Po’s ruthless bodyguard, Bill (Matthews). Will Sloan finally defeat Tong Po and bring his wife to safety? Find out today!

Kickboxer 4 shows us a more serious, more adult David Sloan. Gone are the carefree chuckles and bright, multi-colored Zoobas. Now he wears toned-down plaid shirts and never cracks a smile. Albert Pyun, as he always does, creates a black hole of happiness where no fun can escape. But that being said, this is one of the strongest Pyun movies we’ve seen to date. It has a nice pace and maintains the viewers’ interest with a variety of different methods.

The movie opens with some clips from the previous three Kickboxer installments. There are even a few spoilers, so watch out. But now, Tong Po has gone through a hilariously absurd evolution: in the first movie he was simply a Thai kickboxer, but now he’s “the most powerful drug lord in Mexico”.

How you make a job transition like that, we can’t figure out (nor do we want to). And let’s not forget that this movie came out in 1994, at the height of Mortal Kombat-mania. The tournament set up by Tong Po bears many similarities to the classic game, and in case any of these were lost on you, Po even says at one point, “finish him”. But perhaps the most stunning aspect to Tong Po’s reinvention is that he’s now...wait for it...a record producer! Imagine him in the control room with your band! We wish this angle was expounded upon more, and not just mentioned in a throwaway line. 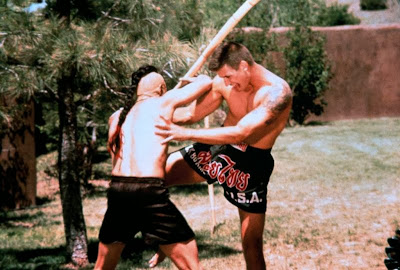 As far as the DEA giving David Sloan a secret identity, the name they chose for him, “Jack Jones”, isn’t going to win them any prizes for originality. Unless they’re trying to confuse Tong Po, making him think the British pop singer from the 60’s is now a Punchfighter.

Sloan spends a lot of the running time of the movie sneaking around the compound looking for his wife. He even dresses up as a ninja to do so. But if he really wanted to blend in, he’d wear a wildly-colored button-down shirt. Whoever chose the shirts for the goons in the movie is to be applauded. They’re one retina-singing eyesore after the next, and they look like if Jackson Pollock designed a line of Cosby sweaters. But Tong Po’s “shirt patrol” literally are one of the most colorful aspects of this movie. Like how tennis matches have ballboys, Po’s death fights have colorful blobs drag the beaten, bruised and dead bodies off the court. 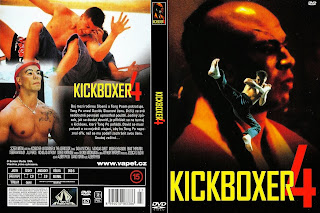 Interestingly, one of the fighters has a Dacascos shirt, and he was to take up the mantle from Sasha Mitchell in the next and (to date) final installment, Kickboxer 5 (1995). Could that have been foreshadowing?  But as for the movie as a whole, clearly Pyun learned something about fighting movies after the horrendously awful Bloodmatch (1991). Sure, a lot of the fight scenes could have used some music, and Pyun does seem to have some sort of allegiance to Thom Matthews, but on the whole, Kickboxer 4 is a crowd-pleaser. Seemingly against all odds, Pyun pulled off a decent movie this time. We’ve got to give credit where credit is due.

So if you’re ready to see Cody, er...I mean David Sloan back in action one more time, you just might find that Kickboxer 4 is a pleasant surprise.

Also check out write-ups from buddies, Ruthless Reviews, DTVC, Ninja Dixon, and The Video Vacuum!
Posted by Ty at 7.2.14

Great review and I agree this is one of Pyun's better efforts not saying much because the guy directed Radioactive Dreams, Heatseeker and Nemesis 2-4. But this is pretty solid B.movie hijinks. With a lot of unintentional laughs, the make up job as well as one of the most hilarious sex scenes ever. I forgot about Tong Po being a record producer, but being a drug lord was more than enough for me. The fights are pretty decent, although the ending is woefully anti-climatic. All in all, Kickboxer series was pretty fun.

Actually, the last one is the only one I didn't enjoy on at least a goofy level. It lacks the greatness of part 1 (Kickboxer 1 is the best one, gotta disagree with you on 3 being better than 1) However part 5 lacks the Shaw Brothers feel of the first one, lacks the cast and Raging Bull style of #2, lacks the ambition and novelty of the bad guy training the hero and lacks 4's goofiness. Indeed, to make matters worse 5 is the only one that has boring fight scenes, and with Mark Dacascos in the movie there's just no excuse at all.

Thanks. Tong Po produced a bunch of hits as a record producer. Haha.

We're not reviewing part 5...don't have it available. I remember watching it a long time ago and thought it was pretty bad too. Poor Dacascos. He was great in Drive and Sabotage.

I completely agree that this is one of Pyun's best movies. It might even be my favourite in the franchise. I didn't think Kickboxer 5 was bad, just different. Kickboxer 4 is one of the few movies to have been rejected (banned) by the BBFC in the UK due to violence.

Thanks for the info about the BBFC. We find that type of information very interesting and useful. The BBFC hates martial arts. Especially nunchuks (even if they are made out of sausage like in Ninja Turtles 2).