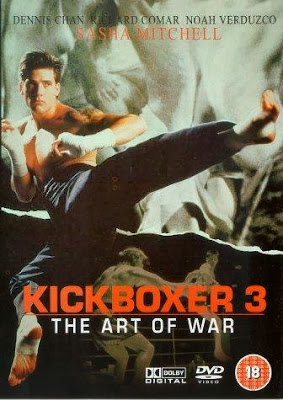 
Ace kickboxer David Sloan (Mitchell) travels to Rio de Janeiro, Brazil, along with his trainer/mentor Xian (Chan) for an exhibition bout. When destitute street scamp Marcos (Verduzco) tries to steal his camera, Sloan realizes Marcos and his sister Isabella (Miranda) have a hard life and need some guidance and understanding. So he takes a liking to the two urchins.

Meanwhile, Sloan prepares to face off against an evil, ruthless kickboxer named Martine (Jacklin). His manager is Lane (Comar), a criminal who also has his hands in white slavery and prostitution. When Lane and his goons kidnap Isabella, it becomes personal for Sloan, and he, along with Xian and Marcos (“The gringo, the philosopher, and the boy”, as their “Machine Gun Joe” character notes) go on a revenge mission to save Isabella and get justice. Will they succeed?

We really enjoyed Kickboxer 3. It’s a lot more entertaining and fun than you might think. The whole concept of a guy, who, as far as we know, is just a simple kickboxer, going on a dangerous mission and shooting people to save a girl he really just met is just so great. More plots should be like this. It’s hard to pinpoint exactly what it is, but something about Sasha Mitchell is also very appealing. He makes a good lead man.

A total change of pace from Van Damme, Mitchell appears to be the ultimate California dude. A cross between Freddie Prinze Jr. and Keanu Reeves, when we first see him in the movie he’s wearing red overalls with no shirt. And his outfits just get better from there on in. Plus he has a winning chuckle that really brings you over to his side. And when Lane hatches his nefarious plan to “tire him out” before the big fight, his assistant says, “he’s like a machine!” - the fact that he’s an indefatigable warrior who is proficient in guns as well as fists, but that he also cares about children, makes you really root for him. 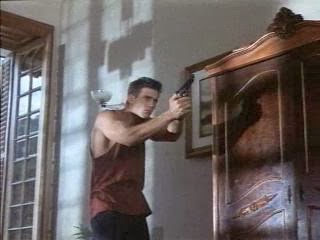 Mitchell has some amazing line readings as well...but his wardrobe is quite impressive: he has not just one, but two Benny The Jet shirts. Giving him a counterpart in the clothing department is his wise sensei Xian. Xian is always ready with a learned maxim, such as “clothes don’t make a woman beautiful...but it helps!” A movie highlight comes when, in their travels around Rio to get answers, they run into a gay Samba choreographer. For some unknown reason, this guy has goons! In the midst of some sort of Carnival rehearsals, he sics his goons on Sloan, Xian and Marcos! It’s nutty ideas like this that move Kickboxer 3 above its seemingly lowly status as a third entry in a series. But let’s also remember director Rick King’s previous movie before this was Prayer of The Rollerboys (1990). So, there you go. 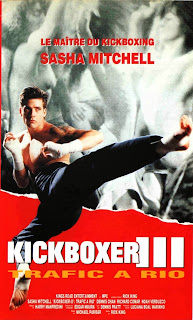 But back to Sloan’s true nemesis, Martine, Ian Jacklin doesn’t say too many actual lines of dialogue (It‘s mainly just your classic yells of “RAAAAHHHH!!!), but he’s still sufficiently evil. He even taunts his opponents by spontaneously breaking into a dance of “The Running Man”. Weirdly, Ian Jacklin, here more than ever, resembles another Ian, Brown. Both the actor/fighter and the singer for The Stone Roses have a distinctly monkey-like face and could be brothers. No insult is intended, it’s simply a description. Ian Brown should have gone into acting instead of pursuing a solo career. Then a movie could be made where Keanu Reeves and Sasha Mitchell are brothers, and Ian Jacklin and Ian Brown are brothers. Sadly, it looks like we won’t see that imaginary film any time soon.

While there is a bit of filler during the “evil training” sequence, Kickboxer 3 provides solid entertainment and is pretty crowd-pleasing. Some of its more absurd moments and ideas help a lot, as does its winning cast, so we can certainly recommend it.

Also check out write-ups by our buddies, DTVC, The Action Elite, Ninja Dixon, The Video Vacuum, and Ruthless Reviews!
Posted by Ty at 5.2.14

I agree; a marked improvement over part two.

Totally agree. Sasha at his best. Just a blast to watch with friends.

Being honest I really liked Kickboxer 4...There's a lot of goofiness going on. The fights are good and it's just a big chunk of dumb fun.

It's definitely one of the goofier sequels out there. Review for it coming today!