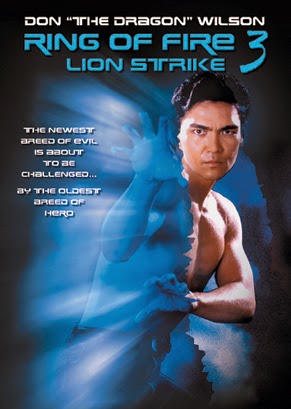 
Dr. Johnny Wu (The Dragon) is once again taking on the baddies in this third (and, to date, final) entry in the Ring of Fire series. Johnny and his son Bobby (Wilson’s real-life son Jonathan) decide to take a break and they drive into the country to relax at the cabin of a fellow doctor.  Unfortunately, this is really bad timing, as the Italian and Russian mobs are joining forces to form an international criminal alliance.

Their first order of business now that they are teaming up (and gathering lots of street thugs as foot soldiers to boot) is to get some nukes, a ton of money, and a computer disc (what else?) with all the important information baddies need to take over the world. By sheer accident, Johnny Wu ends up with the disc, so, far from enjoying this idyllic pastoral setting, he’s kicking and punching his way through wave after wave of goons who think they can beat him. Along the way, he gets help from local park ranger Marla (Barish). Will the bad guys get the disc? What will happen to Johnny and his son? Find out today...

Lion Strike (as it’s simply called in its on-screen title) is a movie of two halves. The first half has that wacky, freewheeling style we always love. Common sense is thrown to the wind and there are plenty of nonsensically enjoyable moments. The second half is your standard beat-em-up, filled with brain-numbing action bits. The fact that there are no less than three credited directors for this movie may have something to do with its schizophrenic character. While the first half has a machine gun-toting grandpa, an exploding helicopter, angry punks that drive their motorcycles into a hospital, and Don’s son mercilessly beating up a bag of popcorn while wearing a li’l leather jacket, among other delightful moments, the second half just has some punching and kicking. So to whoever directed the first half of this movie, kudos. To the director (s) of the second half...you should have done better to keep the momentum of the first half going. 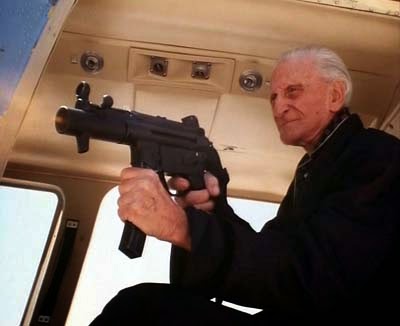 Because this is a PM movie, after all, it has plenty of high-quality explosions, and its time-honored car stunt. And Michael Delano is in it. While criminals searching for “The Disc” has been seen in countless actioners, there are plenty of classic 90’s moments on display, such as Don’s first-generation cellular phone, and Bobby’s bowl haircut, which no 90’s tot could be without.

And because Joe Pesci was huge in the 90’s, there’s a classic “annoying Italian guy” with a nasal voice named Vinny (Del Regno) ready to give him a run for his money. As in most Don movies, he gets shirtless for no reason. Moving on, there’s also the tried-and-true final warehouse fight. The fact that this movie gives Don the opportunity to take on the Russians and the Italians, working in concert, among other goons, is somewhat novel.

Fan favorite Michael Jai White is in it for a very small amount of time, inexplicably playing a guy named Silvio. We definitely wanted to see more of him. Also, as in other Don movies, at least one of his titles is on-screen with him in the opening credits, but why is “World Kickboxing Champion” in quotes? Is he not really? So, in the end, fans of the PM style or Don The Dragon will enjoy this, but we wish the whole movie delivered on the promise of its first half.

Also check out a write-up from our buddy, DTVC! (Thanks for the hotlink to The Old Man With The Uzi Pic!)

A solid action movie. For a guy who has spent most of his acting career shirtless, the irony is that The Dragon nowadays has his own clothesline: TraditionZ, selling mainly, you guessed it: shirts.

Maybe I should just watch the first half twice. Just as long as I don't miss The Dragon take his shirt off for no reason. That always cracked me up.

Roger: The ultimate irony...or should we say, IronING. Haha.

M. Brown: Thanks. Unnecessary shirtlessness is a hallmark of this movie, all great action movies, and, well, our site. Haha. Thanks for reading.