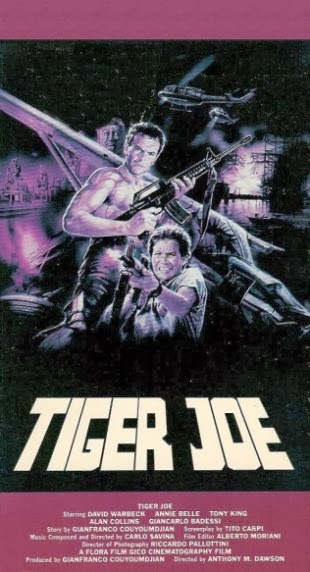 “Tiger” Joe (Warbeck) is a pilot in Southeast Asia. He’s a devil-may-care daredevil (who’s also a handsome devil with a devilish smile). At the small airport he works out of, Midnight (King) and Lenny (Pigozzi) are his co-workers and friends. Whether because of personal convictions or because of money, Joe uses his plane to deliver weapons to rebels fighting an oppressive regime in Cambodia. When he’s shot down in the jungle and his enemies capture him, it seems Tiger Joe has gone on his last flight. But he teams up with a “ferocious female freedom fighter” (to quote the title of an unrelated movie) named Kia (Belle) and her native companion named Datu (Abadeza).

The three of them face many trials, tribulations and travails in the jungle as they fight the baddies and try to find freedom. Meanwhile, Joe’s buddies Lenny and Midnight engage on a trek of their own to try and find the missing Tiger Joe. Will they find him? Will Tiger Joe make it out of his cage? Find out today!

Here we have a jungle actioner with all the typical trappings such as multiple shots of waterfalls, machine guns mowing down Asian baddies with those conical hats, and maybe an exploding hut or two.

But because it was directed by Antonio Margheriti, it has a certain touch that saves it from being bland. In addition, there’s some funny dialogue, such as the very first exchange of the movie when the advice is shouted, “You need to eat more carrots!” There’s even some classic political incorrectness of the day, such as how the Black Guy is named “Midnight” and other racial references in that vein. There’s also plenty of funny NON-dialogue, such as the noises the baddies make when they get shot: their flailing “AAaaahhhh!” will put a smile on your face, even after the 1000th time. Really, it will - it gets funnier every time you hear it. 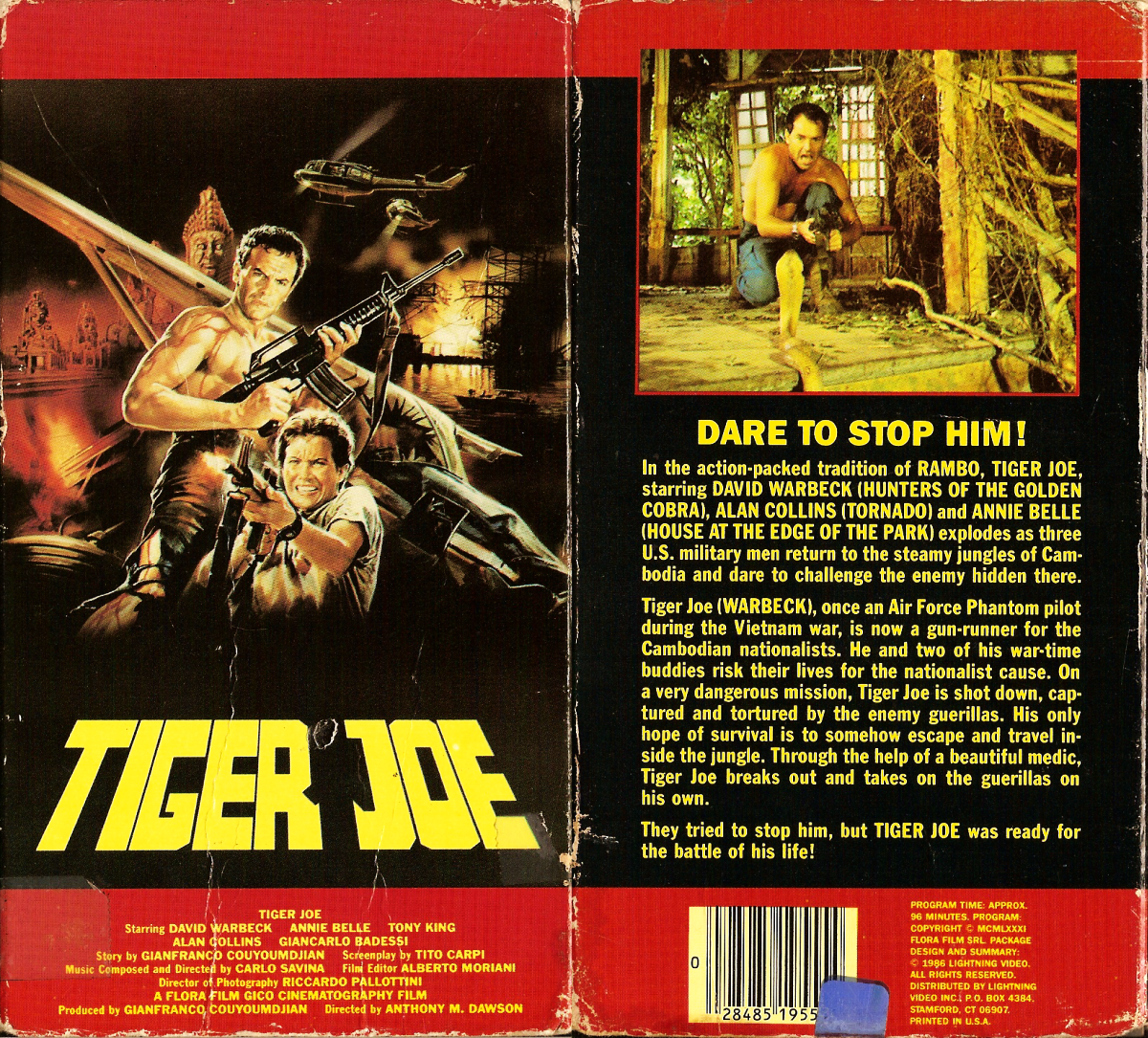 The solid Italian B-movie cast of King, Pigozzi, Belle and Warbeck help things out. Warbeck especially puts in a witty and charming performance. While shirtless for 90 percent of the movie, you root for him anyway.  Plus he looks like a young Jack Nicholson. Warbeck should have had much more mainstream American success than he did.

But Italian exploitation fans will always love him and that’s all that matters. On the negative side of Tiger Joe, there’s no one big villain to fight against and that’s always a problem. Who is good and who is bad isn’t always made clear. It’s a bit on the long side as well for such a threadbare plot - it should have been 5 to 10 minutes shorter. And since this movie was made hot on the heels of Margheriti’s The Last Hunter (1980) - which is a superior movie (check out the DVD from Dark Sky) - try not to compare the two too harshly. Margheriti was seriously blowing up the jungle at this time, besides Tiger Joe and The Last Hunter, he also did Tornado (1983) and Codename: Wildgeese (1984), among others in this timeframe. God bless Margheriti. He’s a great man.

On the technical side, the VHS was released by the great Lightning label back in the 80’s. This release is relatively easy to find today. The DVD, released as part of the Mercs box set, is in Widescreen, or something like Widescreen, so it’s probably preferable to see it that way. Thankfully, there are no technical glitches on this part of the Mercs set.  Whichever way you see it, despite its flaws, don’t be afraid to say hello to Tiger Joe.

This is a great movie. Antonio Margheriti is much missed. Some of his movies: Tornado, Commando Leopard and The Commander have recently been released on Blu-Ray in Germany, widescreen and uncut with English soundtracks.

Very cool! That's great they have such good releases.