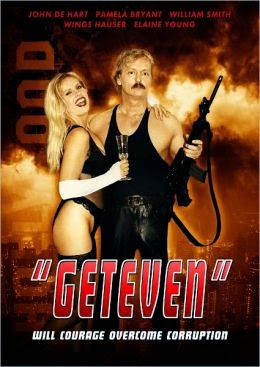 AKA: Road To Revenge

AKA: Road To Revenge


Guh? Buh? Wuh? It’s hard to put into actual words the magic and majesty of “Geteven”. Interestingly,  it’s all one word, in quotes. We would be left speechless, but we’re here to provide a review, so we will, to the best of our ability. Movies like this are rare gems, diamonds in the rough of life that defy reviews.

But we’ll give it the old college try. “Geteven” has that silly, wacky, absurd, amateurish feel where nothing is coherent. And thank goodness for that! It’s all too rare, especially in today’s world of boring, polished product. Movies like “Geteven” are why nostalgia for the video store era is at an all-time high. It produced moments in time like this that will never be duplicated or equaled.

Of course, the enjoyment is all because of one man, the great John De Hart. Out of seemingly nowhere, he wrote, directed in starred in this movie, a great showcase for his talents. If “Geteven” or, as it’s also known, Road To Revenge, is to be believed, not only can he do all those things, but he is also a master joke teller, reciter of Shakespeare, and, in the showstopper of the film, a singer and dancer. He also spends plenty of screen time making sweet, sweet love to Pamela Bryant, who presumably was on board with this and knew what she was getting into. Is there anything he can’t do?

De Hart is like a more stiff and wooden Chris Mitchum. That’s a compliment. The facial expressions he makes while singing his signature tune, “The Shimmy Slide”, are priceless, and look like he’s forced to Shimmy Slide at gunpoint by assailants that have kidnapped his family and forced him to perform for their own amusement. He doesn’t really project when he speaks, but he sure does when he sings. The icing on the cake is his awesome wardrobe, with a new, stunning shirt in every scene. The guy is so cool, he even gets married in early-90’s casualwear. 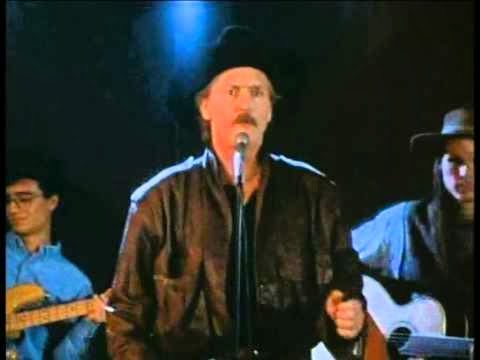 While “Geteven” could be reasonably compared to Miami Connection (1987), Deadly Prey (1987), Samurai Cop (1989), Warrior of Justice (1995), and Night of the Kickfighters (1988), in truth, it’s very much like the productions of early PM. The presences of Wings Hauser and William Smith would reinforce this. As would the fact that De Hart dons a black tanktop as his “Revenge Outfit”, just like Lawrence Hilton Jacobs did before him. Even though the production is wonderfully, unashamedly threadbare, Wings seems to give his all, and Smith does what Smith does. In the movie, things just randomly happen, with weird cuts and no explanations. And there’s line dancing. It all just adds to the fun. 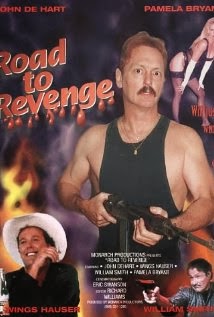 Featuring yet another De Hart musical composition, “I’ll Be With You”, “Geteven” is just more proof that the video store era produced inimitable works of bizarre creative art that should be treasured because they won’t ever be repeated. Like a shooting star that blazes across the sky briefly but beautifully, the works of Matt Hannon, Jay Roberts Jr., Andy Bauman and, of course, John De Hart, should be admired, as we are lucky to get a chance to see them.

Email ThisBlogThis!Share to TwitterShare to FacebookShare to Pinterest
Labels: 1993, 3 and a half stars, Geteven, I'll Be With You, John De Hart, Pamela Jean Bryant, Road To Revenge, The Shimmy Slide, William Smith, Wings Hauser

This is a must watch. Spot on review per usual. Unreal. They do not make these anymore

Thanks for the kind words! It's true, this is a one of a kind movie.

The great people at Vinegar Syndrome are releasing THREE cuts of this in 2K with De Hart extras! Wow!

We both proudly own the Blu-Ray under the title of Champagne and Bullets, as VS is calling it.
Finally someone is listening to our suggestions about putting this movie out.