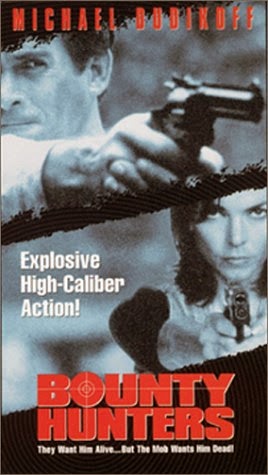 
Daniel “Jersey” Bellini (Dudikoff) is a former Navy SEAL turned bounty hunter who always gets his man. Deimos (Ratner of White Tiger and Breach of Trust fame) is the newest, most evil crime lord on the block. Bellini is a bit strapped for cash so he takes the risky assignment. However, his former girlfriend and fellow bounty hunter B.B. (Howard) also wants to take down Deimos. So B.B. and Bellini reluctantly re-form their partnership. But they also have to dodge the mafia as well. They meet plenty of interesting characters along the way, from Jersey’s sassy next door neighbor Word (Ashanti Williams), to hooker Starr (Fitzgerald). Will Jersey and B.B. be able to avoid all pitfalls and get along with each other long enough to bring Deimos in for good?

Here we get to see the more humorous side of Dudikoff, as he makes a bunch of surprised, bug-eyed faces, and gets himself embroiled in a bunch of silly situations. There’s still action in this movie, but it all has a very jokey tone which some viewers might not like. Not all action has to be gravely serious, and all action stars should get a few chances to work their comedic chops. So in this sense, Bounty Hunters is pretty harmless, and the dumbness might actually work to its advantage in this case.

When this movie was shot, it was a  pre-Dog-The-Bounty-Hunter world, so it was clearly made before bounty huntering was cool. But why didn’t Jersey Bellini get his own show? It would be perfect for syndication, like Walker Texas Ranger or Renegade. But we did get Cobra with Dudikoff, so that’s good. But Jersey would have made a good TV star. It’s surprising enough that there is a sequel to this movie. Who knew it did so well as to warrant that? 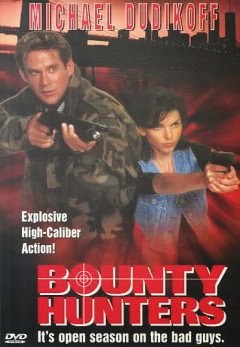 Movie highlights include Jersey’s home security system, his relationship with his neighbor, Word, who clearly brings out his childish side, the visit to the rap club inexplicably named “Meat”, and the complete and total lack of subtlety of any kind. Also Jersey has his weapons in a foam-lined case, and in the foam the shape of the weapon is cut out (you know the kind) - but in Jersey’s case he has special cut-outs for his cigars amongst his guns and knives! It’s silly moments like that which keep Bounty Hunters from ever becoming boring.

Also noteworthy is a scene in a video store, which we always love seeing. There are prominent posters for Snake Eater II: The Drug Buster (1989) - and guess who directed that? You guessed it, Bounty Hunters director George Erschbamer. Nice in-joke.

On the negative side, the movie is too long and the ending scenes seem like they’re in the wrong order. There’s the climax, then a bunch of other stuff happens. Erschbamer also does this in Snake Eater (1989) - it can’t be a coincidence. It must be his style. But Jersey and B.B. return in the sequel, so if you can’t get enough of their wacky antics, there’s more on the way.

Bounty Hunters has humor and inoffensive action, which should please viewers who want a break from more serious viewing.

Very accurate review again. The Dude must have had a thing for bounty-hunter characters, since he played one in Moving Target as well. I agree that Cobra was a great series, which was cancelled much too early. Bounty Hunters could easily have been turned into a series.

By now, you should know I'm a HUGE Dudikoff fan, as well as this site in general.

Having said that, I must respectively disagree with your generous three-star rating of this film.

I really, truly don't feel it makes the Dude's Top 10 best films list, but I appreciate the attention you've been paying Dudikoff as of late.

Roger: Thanks! Would have totally watched another Dudikoff series. Maybe they could still make one...on encore action or Cinemax.

Joe: Thanks! We love Dudikoff as well. Agreed, This is definitely not top 10 material for Dudikoff. Avenging Force or American Ninja should take the top spots. This was way better than Musketeers Forever though. Haha.

Agreed. She was pretty solid in these movies.