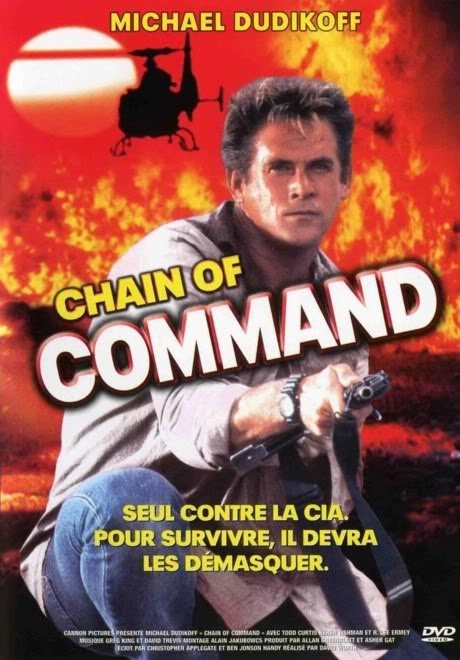 Merrill Ross (Dudikoff) is an ex-Green Beret who now works as a consultant for an oil refining company in the country of Qumir in the Middle East. When terrorists take over the facility, this starts a chain of events (or perhaps commands) that lead Ross through a complex series of double crosses and entanglements involving the CIA, the Qumir government, the terrorists, oil barons, and the militia groups fighting the terrorists.  Can he trust the mysterious Maya Robenowitz (Tishman)? See if Ross can negotiate his way through this quagmire tonight!

Dudikoff is at his most personable and happy-go-lucky here, and this sort of upbeat performance undoubtedly carries the movie. At 97 minutes, Chain of Command drags at times. This could easily have been remedied by chopping 7 minutes, but Dudikoff’s performance buoys the movie nevertheless. Because the main baddie, Rawlings (Curtis), strongly resembles Michael Angelo from Nitro (and has the laugh-out-loud hairstyle that that would imply), and Dudikoff has his trademark cool hair, it’s truly a case of cool hair vs. evil hair in true 80’s style, even though this movie is from the 90’s. 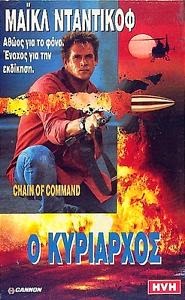 We also see R. Lee Ermey with glasses, a mustache and a bolo tie, and Keren Tishman, who plays Maya, is a horrid actress, but, interestingly, gets hotter as the movie goes on. The jaunty music matches Dudikoff’s personality this time around, but still there are some classic cliches such as guard-tower falls/blow-ups, and the prerequisite wacky taxi driver. Speaking of that, this seems to have been shot in some of the same locations as previous Cannon vehicle Deadly Heroes.  As far as room decor, there are multiple pictures of Bill Clinton on the walls. Not just presidential portraits, mind you, but one is a painting lovingly recreating his moment on the Arsenio Hall show where he wore sunglasses and played the saxophone! 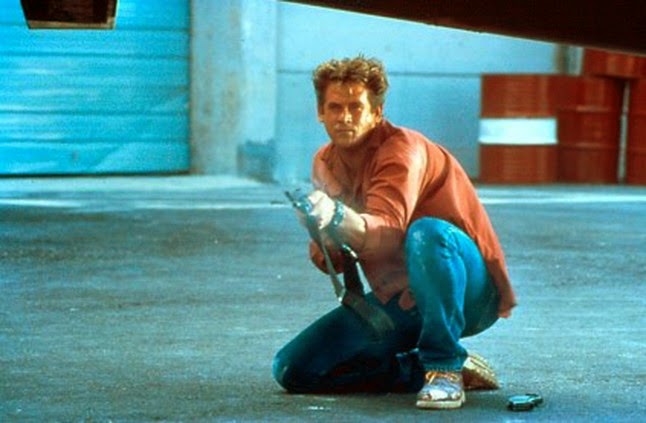 Director David Worth, of Air Strike fame (?), does a competent, if silly job, and underrated actor/director/stunt-coordinator Guy Norris is also on hand. Norris directed Rage and Honor 2: Hostile Takeover, and also worked in various capacities on Day of the Panther and Hurricane Smith, among many other things. His profile as someone in the film industry should be higher.

And we can’t possibly overlook the brilliant, hard-rockin’ tunes by Canadian band Slash Puppet: “When the Whip Comes Down”, and “Rippin’ on a Wishbone”. These songs are pure hair metal, coming rather late in the day for that sort of music. But they are enjoyable and basically disposable, much like Chain of Command itself. Slash Puppet I tell you. Slash Puppet.

So is Chain of Command one of the best Dudikoffs or one of the best Cannons? No, not really, but you gotta love how 80’s-style action continued to thrive into the 90’s with this generally entertaining outing.

Also check out write-ups from buddies, The Video Vacuum and DTVC!
Posted by Ty at 9.5.14

I completely agree. This is a solid movie. David Worth also directed Kickboxer, True Vengeance and the hilarious Robert Ginty vehicle Warrior Of The Lost World. This movie was actually filmed in early 1993 before Deadly Heroes, but got stuck on the shelf due to Cannon's weak financial situation. Other movies that suffered the same fate were Hellbound, American Cyborg and American Ninja V, which were all released after Cannon had finally folded.

Guys, I commend you once again on a fine review. In a perfect world, you would be teaching film appreciation at a college, making money on this.

The next generation of movie-goers needs to understand what constitutes good cinema: I'd put up a three-star Cannon film against just about any Hollywood blockbuster today and be happy with my decision.

I was never able to find a VHS copy of this. I think I'd really like this one.

Van Damme, Seagal and Norris all have DTV releases with four movies for $5. Dudikoff would be perfect for such an offering, as he's had some enjoyable popcorn movies.

Your Dudikoff-Week: From bad "Musketeers forever" to better "Chain of Command" and "The human shield" you have to go to worst: "Quicksand". Watched it on TV but stopped at the half.

Mostly agree here, though I thought Tishman was a decent actress, i'm surprised that this film was her only acting credit.

Roger: Worth's made some fun stuff. We just watched True Vengeance and it was very enjoyable. Review coming soon. Also thanks for the Cannon info. Very interesting.

Joe: Thanks! That would be awesome to teach a class on action film theory. Haha. I think there's some cheap VHS copies on Amazon. Hope you can get a copy soon.

Venom: Her acting wasn't the greatest but she was good looking! Haha.

Also i'd be curious to see review these Dudikoff films:

Dudikoff is also starring in the upcoming movie "The Bouncer"

We have Bounty Hunters 1 and 2 coming up Monday and Wednesday. and then Virtual Assassin on Friday...then we are out of Dudikoff flicks for now.

Does the helicopter prominently displayed on the cover explode?

I think it does towards the end. Once again, hard to remember...we saw this awhile ago. Sorry.

I happened to catch his IMDB page with The Bouncer on there. It essentially reads like a DTV version of Road House, but I'm still first in line when it gets released:

The Bouncer tells the story of Danny Martin: a reluctant one-man fighting machine tasked with cleaning up the roughest night spot in town without getting himself killed in the process.

If that's the case, I say go all out. Get me cameos with Kelly Lynch, Terry Funk, and whoever else they could round up.

Sounds good! Hope it gets made. Sam Elliot is still alive, throw him in there too. Haha.