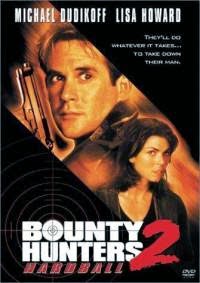 Jersey and B.B. (Dudikoff and Howard) are back, bounty huntering it up in this sequel. This time around, crime lord Wald (Curtis) is causing all sorts of trouble for our heroic pair. They must dodge his goons - as well as relationship problems - along the way to bringing in their prize catch. Will they succeed?

You might be asking yourself, “Wow, there is a sequel to Bounty Hunters? Why? Was the first one such a success?” At least, that’s what we were wondering. Like Cage 2, what we get here is more of the same (if you’ve seen the first one, you know what to expect) - but some minor differences, like this one seems a bit more talky. They’ve upped the humor quotient, but somehow it’s not as funny as the first film. Many of the same people are back, both in front of and behind the camera, so the same sort of silly vibe is maintained.

Tony Curtis is on hand as the main baddie, but he’s not really on screen for very much time. The main asset he brings is his distinctive voice. Curtis was starting to pop up in DTV items around this time, see Center Of The Web for a good example. He didn’t quite reach the heights of Cameron Mitchell in this department, but he probably could have. 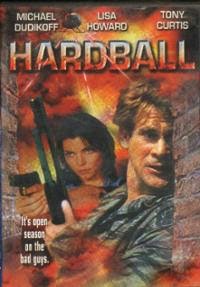 While even in this installment they managed the prerequisite torture scene, and there is a very cool moment involving Michael Dudikoff with a rocket launcher, there are so many unanswered questions lingering from the first movie. Such as: What happened to the rap career of Deimos’ butler? And where is Word, Jersey’s sassy neighbor kid? But while those may remain the great mysteries of the universe, what’s intact is the chemistry between Dudikoff and Howard, which seems to have improved. Had the series continued (or become a TV show), they could have become the action equivalent to Nick and Nora (William Powell and Myrna Loy) from The Thin Man (1934) and its sequels. But then again, it’s probably good this didn’t happen, because we felt the Bounty Hunters theme had run out of steam by the end of this movie. Perhaps they should have quit while they were ahead.

If you enjoyed the first movie, with its mix of action and humor, you’ll find more of the same in this sequel, which honestly probably didn’t have to be made, but Dudikoff and Howard look like they’re enjoying themselves, so perhaps you will too.

I thought this was even better then the first film.

The director of this film also helmed the "Most Dangerous Game" rip-off (starring Lorenzo Lamas) "Final Round", really intersted to hear your thoughts on that film.

Always wanted to see Final Round. We are working on getting the VHS.