Set sometime in the future, Virtual Assassin is the story of Nick James (Dudikoff), a cop who, after the death of his partner at the hands of the evil Nassim (James) hits the skids. Due to his drinking and gambling, he lives in a trailer and is generally down and out. He gets a job as a janitor in a computer research facility, where Dr. Royce (Kaiser) is working on containing a deadly virus. Then along comes Nassim back into Nick’s life - he and his band of goons overtake the facility, with the aim of controlling the virus and Nassim becoming the lord and master of the universe because he holds untold power. But they didn’t count on one thing: a badass janitor who intends to foil their nefarious plans. Will Nick James settle the score with Nassim? Or will he become the ultimate VIRTUAL ASSASSIN? Find out today!

It’s comforting to see Michael Dudikoff’s hair is still awesome in the future. Virtual Assassin is one of the better “DieHardInA” movies we’ve seen to date. Besides Die Hard (1988), the movie seems to be influenced by Blade Runner (1982), Robocop (1987), The Terminator (1984), Firepower (1993) and Freejack (1992) (the movie’s original title, Cyberjack, would seem to indicate that). But, far and away the film that Virtual Assassin most closely resembles is Virtuosity (1995). It borrows many ideas and plot points from that movie. Even the re-titling would indicate the desire to bring more “Virtuosity” to the goings-on. But it was the 90’s after all and cyber-things were huge. Hackers, VR, giant helmets and The Lawnmower Man were everywhere. So it was only a matter of time until two of the most popular DTV concepts of the 90’s - cyber-matters and DieHardInA - merged, and thus we now have Virtual Assassin for our viewing enjoyment. Dudikoff rarely disappoints, and here he’s great as the grizzled, burned-out ex-cop who just wants to listen to baseball on a transistor radio (you’d think the technology would be a bit better there - everything else around him is a tad more high-tech), but has to not only face plenty of goons in order to save the day, but also a law-enforcement robot which doesn’t at all resemble ED-209. Brazenly, there’s something called “Skynet” - where have we heard that before? That seems especially blatant. Dudikoff’s personality carries the movie - but luckily it also has a good pace, some good ideas (besides the stolen ones) and is entertaining. Helping with that is the performance of Brion James, which is especially animated. Here he seems to be playing yet another albino baddie - let’s not forget Nightmare at Noon (1988) - but he’s better here. He makes a great villain to face off with Dudikoff. Face off with Dudikoff would also make a great name for a talk show. 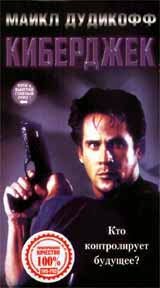 Of course, because this is a Die Hard-esque DTV movie from the 90’s, there has to be one of those super-annoying, skinny, Eurotrash underlings, here named Numb (Cross). Probably the funniest underling is Reef (McKenzie) who is a stereotypical Jamaican who wants to trick Nick James into “smoking some spliff” with him.

The impressively-named Topaz Hasfal-Schou as Meghan, Nassim’s evil female sidekick, resembles Robin Quivers, and Jerry Wasserman as Neil Jervis deserves some recognition as being one of those working actors you see a lot, but never makes the talk show or magazine circuit. We applaud actors like Wasserman. But just why all Nassim’s underlings are dressed in strange Halloween costumes is not explained.

Thanks to some nice touches and Dudikoff’s performance, Virtual Assassin rises above its lowly station as a humble 90’s Cyber-Die Hard. We enjoyed it, and the 90’s nostalgia factor has only ensured its enjoyability for the forseeable future.


Also check out write-ups from our buddies, DTVC, Saturday Night Screening, and The Video Vacuum!
Posted by Ty at 16.5.14

I don't mean to sound like a broken record (Google it, kids), but great review as always.

The trailer was touch and go in terms of action, which I suppose is par for the course for a sci-fi actioner.

I wanted to ask you this, because you have seen a lot more "Die Hard in a ..." films (both big budget as well as DTV) than I have: Which ones in the genre would you say are the most well done and entertaining?

If you had to pick a Top 5, which ones would you choose?

Just on my experience, I'd have to include at least these:

I heard The Raid was incredible, but I didn't see it.

Curious about your thoughts.

Great review again. Face off with Dudikoff is a great title for a show. Other options could be Speaking with Speakman, Finding David Bradley, The Trouble with Trimble, or Chasing the Dragon.

Joe: In terms of funniness, Crackerjack 2 is the clear winner. But Crackerjack 1 and Command Performance, Sudden Death (With Van Damme) are solid entries in the genre, with Deadly Outbreak and Lethal Tender being classic 90s examples. Two of the worst are Detention and Terminal Rush. Both Raid movies are superlative action films that need to be seen and can't recommend them strongly enough.

Roger: Thanks. Brilliant! We laughed out loud at your suggestions especially The Trouble With Trimble.

Thanks! A Canadian version could be Jabbering with Jalal.

Joe, you should definitely check out The Raid.

Sudden Death, Under Siege, Passenger 57 and Crackerjack were all great DieHardInA movies.

Disagree strongly on Detention and Terminal Rush, I thought those were both pretty fun and entertaining films and would definitely recommend them.

Two MUCH worse Die-hard rip-offs that I gurantee will make you appreciate those films much more are "The Vault"(Die Hard in a museum) and "Hostile Takedown"(Die Hard in a shopping mall and basically a no-budget version of "Point Blank"), both incredibly low-budget crap-fests.

There's a whole page on TVTropes for these types of films, i've made several entries to that list myself:http://tvtropes.org/pmwiki/pmwiki.php/Main/DieHardOnAnX

Heard The Vault and Hostile Takedown were terrible. Will keep avoiding them. Haha.

I can't believe I forgot Sudden Death, a movie featuring the greatest mascot fighting a hero scene in cinema history!

Haven't seen Passenger 57 in a bit, but good call on that one, too.

"Speaking with Speakman" won the Internet for me today! Nice job on that one, Roger.

Thanks for the kind words, Joe and Ty.