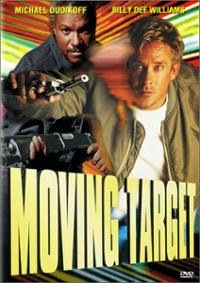 
Sonny McClean (Dude) is a bounty hunter who just wants to find the escaped criminals he’s assigned to find, then go home to his pregnant wife, Casey (Johnson). Of course, she wants him to quit the skip tracer game and get a less dangerous job. Sonny doesn’t necessarily disagree - but first he has to disentangle himself from a complex web involving being framed for murder and having to contend with two different factions of the Russian mob.

In too deep, Sonny tries to enlist the help of his old buddy Don Racine (Williams), but will it be enough? Using only his wits (well, that and his fists), Sonny will have to fight the mobsters, clear his good name, and get home to his wife on time. Can he do it?

The fact that both Michael Dudikoff and Billy Dee Williams are both charming and likable are pretty much the only things that keep Moving Target afloat. Director Damian Lee - responsible for such unmitigated turkeys as Agent Red (2000), and, to be fair, decent movies like Last Man Standing (1987) - imbues the movie with an overall bleak feel, with nothing but cloudy, overcast skies and the bare trees and cold, snowy environs of the Canada all his movies seem to be set in.

On top of that, Moving Target takes its sweet time, with some long, meandering bits in between the fight scenes or more relevant scenes.  But many of the cliches we’ve come to know and love are present and accounted for, such as the abandoned warehouse and the prerequisite torture scene (which naturally takes place in the abandoned warehouse). 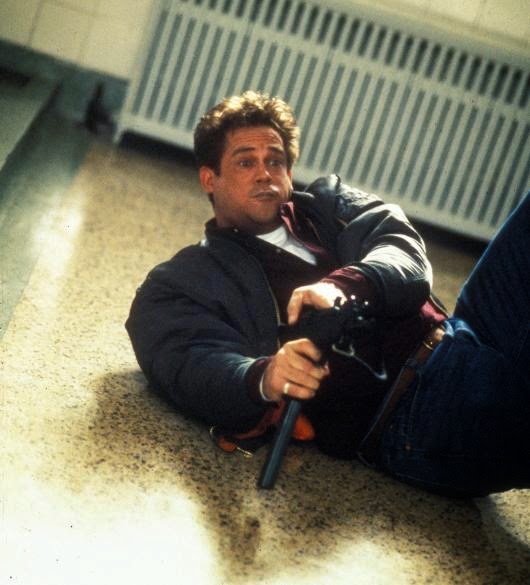 Speaking of which, Dudikoff does get beat up a lot in this movie. The polar opposite of Seagal (who refuses to be punched or kicked, much less bested in a fight, just like in real life) - Dudikoff is getting wailed on in seemingly every other scene.  Perhaps that’s what he gets for continuing to be a bounty hunter, because the same year as Moving Target, he was also in Bounty Hunters (1996), with Bounty Hunters 2 (1997) following just a year later. It was fun to see a drunk and slurring Billy December Williams (that was part of his character, we’re assuming. And hoping.) - as much as Dudikoff gets beat up, Williams is drunkenly shambling around and swigging a beer. It was unusual for him, and we liked it.

Michelle Johnson should have been insulted to play the stereotypical character of the grousing woman. Surely there are better roles for female actors than one-dimensional parts like this. However, she did show us that you can be part of a Lamaze class even if you’re not even close to showing with your baby. So that was helpful. 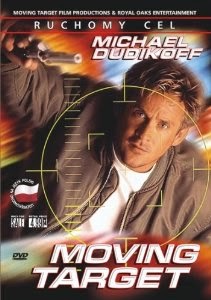 Not to be confused with the Don The Dragon movie of the same name from 2000 (or any other movie by this name), Moving Target features the mindless shooting and relatively inconsequential antics we’ve come to expect from Damian Lee. Only the two leads make this worth watching. Featuring a catchy song we believe to be called “Rock Me With Your Love” (typically, no artist is credited), Moving Target is hit-or-miss.

The American Ninja and Lando (I refuse to call him BDW) were in a movie and this is the FIRST time I'm learning about it?

My mind is swimming right now.

How exasperated do you think Dudikoff was when his agent called to say he was offered a part as a bounty hunter RIGHT after this movie?

The Dude is one of my all-time favorite actors, but even I admit he's made some utterly unwatchable films. I own both Bounty Hunter and its sequel and couldn't sit through both of them. I'm sorry to hear that this was such a stinker.

Was Lando drinking Colt 45? If I was directing this, I would have insisted on it.

I see you haven't reviewed Crash Dive yet. Essentially, it's Die Hard in a sub with Dudikoff. It's a quality B-level movie. It's got a basic plot, but good pacing and fight scenes. I think you'll enjoy it.

I thought this was a pretty good film for the most part, certainly not mediocre like Dudikoff's western outing-The Shooter or his failed attempts at drama with "The Debt" and "The Silencer"

Joe: We were surprised to find that they were in a movie together too, sadly it doesn't live up to the awesomeness you might think. Dudikoff is one of our favorites as well, and the review is for the Bounty Hunter movies are coming this month. Used to own Bounty Hunter 1 and traded it in at our local CT Game Xchange (Do you have those?) We've reviewed Counter Measures which is a sequel to Crash Dive, but not Crash Dive itself. If you like "Die Hard in A..." movies, check out our review for Sudden Death. We list them all. Haha. Unfortunately, Lando doesn't drink any Colt 45. Haha.

Venom: It wasn't horrible, but it wasn't one of The Dude's better outings. Chain Of Command is better in our opinion.

Chain Of Command was pretty good.

Another Dudikoff film I would recommend is Musketeers Forever, it's never been officially released on VHS or DVD in the U.S., though it is readily availible on Netflix streaming.

Armstrong-I think you should finish both of those films before you judge them(they both get pretty good). It would always annoy me when a movie critic like Gene Siskel would review a film despite not having finished it.

We are posting Musketeers Forever on Monday. We didn't like very much. Haha.

This was an OK movie, much better than Damian Lee's recent efforts. I actually think the bleak landscapes are a nice break from the typical urban action-movie landscapes.

You're right. This was just Ok. It could've been way better. It's just very run of the mill.

This post has more action than the movie! Haha.