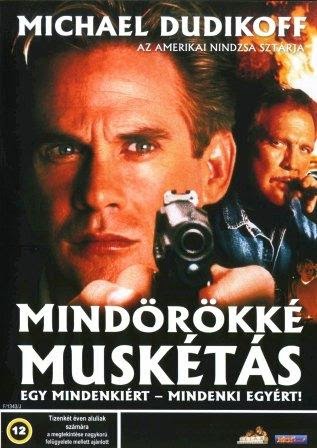 
Three middle-aged men with a lot of time on their hands decide to open a bar together. Naturally, their leader is Lee Majors, and after a classic “fixing up the place” montage, they turn an old, run-down building into the tavern of their dreams. The men clearly bonded because of their mutual love of two things: old blues musicians, and Alexandre Dumas’ Musketeers lore. Unsurprisingly, and, in fact, pretty painfully, they identify themselves as the three Musketeers and even will use any excuse whatsoever to use a certain catchphrase (which shall not be mentioned here).

When the son of one of their old war buddies, a man who just happens to be named D’Artagnan (Dudikoff), comes to town, they give him a job as a bartender and things seem peachy keen. But, predictably enough, an evil gangster, Kenton Crawford (Rudolf Schenker lookalike Neufeld) wants to take some Indian land and build a casino on it. Some local Native-Canadians actually object to this, one of which is D’Artagnan’s love interest Irina (Varakine). Then some barroom brawls erupt and you go to the kitchen to get a snack. Will you get another snack later? Find out today! 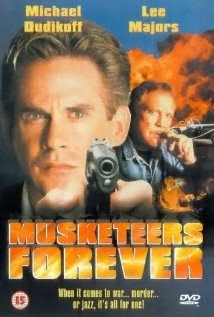 This Canadian variant on Road House (1989), or, Road Hoose, sadly, pretty much lacks everything a sane human being looks for when they seek out filmed entertainment. It’s chock-full of dialogue that’s so poorly written it’s cringe-inducing, the plot is trite and boring, there’s a ton of unfunny humor, the bad kind of cliches, and fight scenes so woefully amateurish they make the barfights in Billy Ray Cyrus’ Radical Jack (2000) look like a Jet Li movie.

It all has a junky look and the stupidity level is so high, you don’t care about the characters or their plight. Dudikoff is reasonably charming, but there’s nothing for him to work with here. He deserves better material he can sink his teeth into, not cinematic empty calories. Even his hair isn’t quite as cool as it normally is. Perhaps it has a sixth sense of its own and decided to hibernate during this long Canadian winter.

Besides, this is an obvious ripoff of Ring of the Musketeers (1992), but instead of the power-team of Cheech Marin and David Hasselhoff, this has Dudikoff and Lee Majors. Not Lee Majors the Second, mind you, but the original one. There are no cool, standout moments to be found in this substandard effort. Because the plot deals with Indians, the name of the town where all of this takes place is “Indian Creek”. This should give you an idea of the level of creative powers going on here. Though, out of the blue, in reference to D’Artagnan (groan), someone says the line “he had to sell his crossbow for gas money”. You don’t hear that sentence everyday.

That was by far the only worthwhile two seconds in this dud. We truly tried to see the bright side and this was all we could come up with. The remaining 90 minutes remain DOA. (Though, to be fair, local band Too Many Cooks get a lot of screen time - but then again, do they really want this on their resume?).

Also check out a write-up from out buddy, DTVC!

I completely agree with you. It's hard to fathom how Dudikoff's career crash-dived after Cannon folded. He could have used some counter measures or at least remained a moving target, but apparently, he was stuck in quicksand. The best movie he did after Cannon was Soldier Boyz. Road Hoose, hilarious!

Haha he did. Happy you're enjoying Dudikoff week.

Have to strongly disagree with your review here, I thought this film was pretty good overall, and it didn't feel like a "rip-off" of Ring Of The Musketeers to me.

We definitely disagree on this one. Haha. We thought this was a tough sit...just nothing good about this one at all. Ring Of The Musketeers was way better.

What an unbelievable concept for a movie: Lee Majors opens a bar with some middle age men and hires Michael Dudikoff as a barman.

Still, at least they tried. It'd be far to worse to be sitting around now, wondering why the hell someone never made a film with Lee Majors running a bar with Michael Dudikoff.

You're welcome. Happy you enjoyed it. This should've been awesome. If Dudikoff and Lee teamed up as cops instead of musketeers and mowed down some baddies, it could've been a classic.

Martin Neufeld also appeared in The Peacekeeper with Dolph Lundgren.