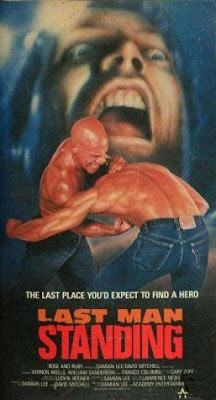 Roo Marcus (Wells) is a down-and-out guy with a troubled past who was recently released from a mental institution, where he suffered through inhumane conditions and shock therapy. Going back to the only thing he really knows, he begins Punchfighting in brutal, bare-knuckle “circle fights” run by Napoleon (Copeman). He tries once again to leave the Punchfighting life behind, working at a gym run by his buddy Casper (Sanderson). He even develops a relationship with local tomboy Charlie (Sonja Belliveau). But due to circumstances beyond his control, he gets sucked back into Punchfighting, having to contend with musclebound maniac Cannon (Dempster), and quick, charismatic, Muhammad Ali-like Razor (Andrews). Will Roo ever find the peace in life he seeks?

Last Man Standing (not to be confused with the Wincott movie - or any other movie - with the same name) was a pleasant surprise. While it contains no shortage of bare-knuckle Punchfighting, if you took out all, or most, of the circle fights, it could stand on its own as a serious and even tender drama. That’s surely the sign of a quality Punchfighter.

Vernon Wells gives a wonderfully sensitive and nuanced performance as Roo. You really care about him. We were only familiar with his work in Nam Angels (1989), American Eagle (1989) and of course Commando (1985). We didn’t know he could actually ACT. While he was excellent in the role, we also thought Richard Norton could have played Roo. Balancing out the introspective Roo was his friend Batty, played by Franco Columbu. He gives a crazy, unhinged performance and he really lives up to his character’s name.

We were a little wary going in to this movie, as we haven’t had great luck with Damian Lee movies in the past. But we’re glad we went forward, as this, his first movie as director, is his best we’ve seen to date. Lee wrote and produced Busted Up (1986) and Thunderground (1989) but did not direct them. Last Man Standing has a similar vibe and will remind you of those. While Lee would return to Punchfighting later in his career with Fatal Combat (1997) (with Wincott, funnily enough), and make movies that range from funny (Abraxas, 1990) to just plain awful (Agent Red, 2000), if you’re not familiar with his work, here would be a great place to start (and possibly end).

The circle fights, and the crowds that surround them, will remind you of the video for the Scorpions’ “Rock You Like A Hurricane”. But it predates UFC’s “The Octagon” by many years, and as far as cage fighting movies go, this is probably rivaled only by...well...Cage (1989). And possibly Cage 2 (1994). But beyond the cage, it has other fighting innovations we’d never seen before, such as when two burly meatheads oil each other up (with actual black oil), tie a rope to each other’s arms, and get into a rickety rowboat in a lake and then have at it. You can’t make this stuff up. Or maybe you can. But how did they?

William Sanderson is always great, Damian Lee appears as the pre-Bumfights Bumfighter Sully, and Kim Coates has a cameo, but Real Andrews is keepin’ it Real as Razor. While we’d seen him before in the aforementioned Busted Up, as well as Red Scorpion 2 (1994), and the Billy Blanks vehicles Expect No Mercy (1995) and Balance of Power (1996), here he gives a noteworthy performance, and you’ll love his rapping abilities.

Last Man Standing as a whole, like Wells’ performance, is human and street-level. To be brutally honest, the movie does feel somewhat low-rent, but to put a positive spin on that, we could just say it’s gritty. If you’re a fan of the Punchfighting genre, definitely check this one out.

Also check out a review by our buddy, Cool Target!

It's a shame Vernon Wells never really hit it big, this film showed what a great actor he was. On a side note, the PM film by the same name is one of my all time favorite action films.

Loved the Wincott Last Man Standing too. A PM classic.

the two dudes on the cover are the shiniest humans, maybe ever.

Haha! Just like the Bleeders "Bleeding box", this was clearly a gimmick to attract video store patrons' eyes.