When his sister is violently murdered by arch-baddie Mintz (Russo), Frank Da Vinci (Travolta) wants revenge. Da Vinci, a highly-decorated Vietnam vet, wants to leave his past behind him and move on with his life, getting involved with his local mission, and forging a relationship with the religious Lupe (Vanity), who cares for his young niece when he's not around.

But Da Vinci is also still in touch with his 'Nam buddies, who all have too-appropriate nicknames such as the Shakespeare-quoting Hamlet (Foronjy), the guy in the wheelchair named Wheels (Green), and the guy of unimportant Asian origin that may or may not be Hawaiian, Don Ho (Richmond), among others. But even Da Vinci's ever-loyal charges aren't enough to get to the bottom of the murder of his beloved sibling, so he enlists the help of hired killer China Smith (Nouri).

At first Smith doesn't want to be bothered with Da Vinci and would rather concentrate on his girlfriend, mysteriously named Fred (Moore). But after inexplicably talking to his computer (the computer never responds), he gets some info on Da Vinci that changes his mind, and he enlists in DA VINCI'S WAR. But will there be victory or defeat? 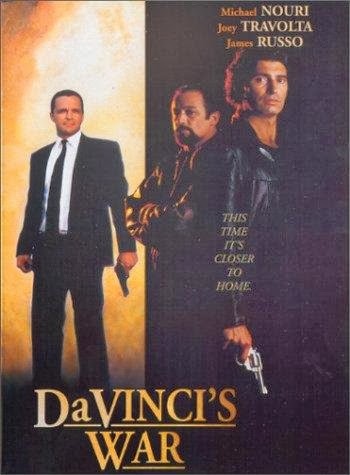 The original Da Vinci code, this is pretty much an Italian-American variant on Gordon's War (1973), right down to the title. But this particular War is about as "Direct To Video" as it gets in its look and feel. Around these parts, however, that's not considered a negative, but other people might want to be forewarned about the low-budget vibe.

Director Martino is a largely un-talked about figure in the DTV world, having worked a lot with City Lights/PM and been involved with their Anna Nicole Smithsploitation in the 90's. He obviously spent his budget on the stellar B-movie cast, which besides the aforementioned names also features fan favorite Sam Jones, as well as Bob Golic and a whole bunch of Travoltas, such as Rachel, Nicole, and Sam (the latter behind the camera, along with Addison Randall).

Joey, quite possibly the most talented Travolta to date, is initially unrecognizable with his facial hair. But once he utters the immortal line “Aw Geez!”(in a surprisingly dramatic reading of that Travolta-ism) we know it can only be him. In other cast news, there’s also Gino Dentie, who released the “Direct Disco” album in the 70’s, and who also collaborated on the song “Da Vinci’s March” with Branscombe Richmond. So there’s more than enough on-screen talent, but it doesn’t entirely translate into a wholly enjoyable and completely cohesive final product. 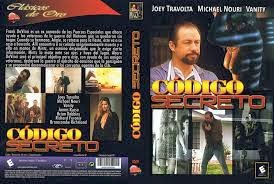 What’s good about Da Vinci’s War is that it is from a time before Tarantino knockoffs polluted the market. And that both James Russo and Joey Travolta, at different points, walk in slow motion, thus looking cool. Plus Michael Nouri gets a great intro to his character.

What’s bad about Da Vinci’s War is that it falls prey to the typical low budget pitfalls: stodgy acting, a stiff feel, and low-energy valleys that we as viewers have to go through. Not to say that there aren’t a few okay moments (not to mention some unintentionally funny moments), but the balance isn’t always in the movie’s favor.

While the epilogue after the movie states that it is dedicated to all the homeless veterans, the sentiment is undercut somewhat due to the fact that on a banner over all the vets, they misspelled the word “homeless”! If they’re trying to get our sympathy by informing us of the “homless” vets, they should run their banner through spell check. Unless the point is to announce their lack of hom. Or maybe they’re going the route of little moppets selling lemonade with a sign with a few backwards letters in order to draw us in. Our vets deserve better than that. But the banner is over what can only be described as a shuffling “Homeless Veteran’s Choir” and they all sing, led by Vanity of course. So that must be a movie first.

In the end, Da Vinci’s War sports a never-to-be-replicated cast assemblage, but it lacks the forceful punch it could have had.