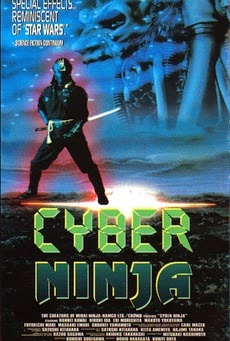 
When Raimei Dark Bishop (Yamamoto) creates “the perfect cyber ninja to please Dark Overlord’s birthday” (Dark Overlord is a menacing vision on a screen played by Masaaki Emori, by the by) , he doesn’t realize he has set in motion the ultimate battle between human ninja/samurai, and the kind of the cybernetic variety. When Princess Saki (Morishita) is kidnapped, bounty hunter Akagi (Kawai) snaps into action.

Told he will be paid for every Cyber Ninja head he brings back to his master, he ends up teaming up with the aforementioned “perfect Cyber Ninja”, who laments the loss of his human soul. Henceforth a wild, unmanageable and messy battle ensues. Will humans come out victorious in the war between them and their mecha-ninja assailants? Find out today...?

It’s certainly the “most Japanese” thing we’ve witnessed in some time: seemingly out of nowhere huge robots appear, seemingly ultra-futuristic but with traditional Japanese home architecture affixed to the front of their panels (!!!), then Japanese men in traditional garb swordfight against constant volleys of “pew-pew” lasers, then a beautiful princess is kidnapped by a guy named “Raimei Dark Bishop”, whose costume seems to fuse Kabuki makeup with modern updates like stylized insect-like tines sprouting out his back.

Then ninjas have helmets that stream Japanese writing in their field of vision. Then a creature who looks like a cross between Predator and Terl named Shoki appears, who has a tiny face on top of a huge mass of snakelike wires...I think you get the idea. If you’re looking for anything remotely resembling coherency, run screaming in the other direction. If you’re looking for something weird and Japanese, this is the movie for you. 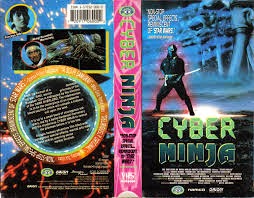 The movie plays like a live-action Anime, and contains all the insanity an attempt like that may create. Apparently it was based on a Japanese video game, which again is not surprising. Normal movie-watchers are used to seeing the Paramount or Columbia logos before the movie starts.

Cyber Ninja begins with the Namco logo complete with a smiling Pac-Man giving us the thumbs-up. You know before the movie even begins that if it’s a Namco production, you’re in for something...unusual. But surely that makes this one of the very first video game movies. The Japanese are always ahead of us.

Even though the film starts with a couple of silent movie-style intertitles “explaining” what’s going on, not only do the explanations make no sense, the fact that they’re done in that style just adds to the confusion. The overall concept seems to be “old school meets new school” in a mix of crazy inventions, swords, lasers and explosions. But the visuals are very strong, and whoever created the costumes and special effects should be commended. Not only does the movie have funny dubbing, it also has funny running, as the ninjas have their own way of moving which in itself is very amusing, which you just have to see, it’s too hard to explain.

Amazingly, this movie was released in the U.S. by Fox Lorber Home Video. Cyber Ninja is seemingly incomprehensible to us round-eyes, and we’re not even sure if the video game it’s based off of, Mirai Ninja, was even released here. Presumably this would have come out on Nintendo...any guesses? But the bottom line is that while the movie itself is utterly nonsensical, it is strong visually and has that wacky sensibility with a lot of creative inventions that show effort and energy. If that appeals to you, do go off and seek this movie out. If you’re obsessed with coherency, you probably wouldn’t be considering Cyber Ninja anyway, so, everybody wins.

Dammit, I'm going to have to find this. I love the "Special Effects reminiscent of Star Wars" quote on the cover.

That's got to be one of silliest pull quotes ever.

One of the silliest and one of the best! Haha.