Chris King (Lowery) has his life turned upside down when his father dies in a freak accident and leaves behind a mysterious package. Now baddies far and wide are after him: mobsters like Zelmo (Rosato), a hitman, Straker (Davies), and the big boss man himself, Wakeman (Plummer). King then teams up with the streetwise Jimmy (Hope) and goes on the run for his life. At every turn, he must try and figure out what is going on and how to extricate himself from the nightmare. What in the world is a...CONSPIRACY OF FEAR?

Sadly, and we get absolutely no joy from reporting this, we have to announce that Conspiracy of Fear just plain sucks. It’s filled from confusing beginning to overlong end with:

...among other items that dare, nay, defy audiences to slog through this crud. Somehow, we made it, but we’re used to suffering through turkeys like this. Before watching it, we thought, “oh, a PM movie with Christopher Plummer, that should be interesting.” Well, PM picked this up and released it on VHS, they did not produce it. And Plummer is just completely slumming it. Why, PM, why? We feel tricked.

As is common for low-budget movies, especially ones shot in Canada pretending to be America like this one, much of the cast resemble bigger-name stars. Funnily enough, it seems like Conspiracy of Fear was cast from one of those places that provide celebrity look-alikes. The main kid looks like Chris Lemmon, the main baddie looks like Kurt Russell/Patrick Swayze, the doorman is Rodney Dangerfield, and other characters are carbon copies of Terence Stamp, David Heavener and Dennis Miller. Speaking of bits taken from elsewhere, there’s even a sassy waitress named Flo - also recycled in Search and Destroy (1988). 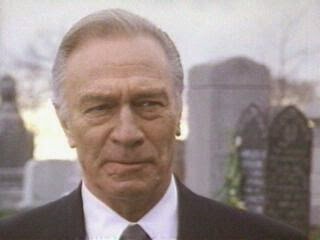 Have you ever noticed that as a substitute for interesting dialogue, characters just yell a lot in poorly-written movies? Well, here is a prime example. This when lamely trying to be funny in an indoor voice isn’t cutting it anymore. Plus the movie is WAY too long at almost two full hours.

Much of that is just audience-insulting overlong dialogue scenes that don’t advance the plot forward or extremely repetitive chase sequences. Truly awful movies don’t seem to care if they’ve overstayed their welcome with the audience. Take the unbelievably bad and way-too-long Iron Thunder (1998) as a perfect example. And, perhaps the ultimate insult - there’s Michael Bolton music on the soundtrack. It’s almost like the filmmakers were trying to create a compendium of things that make movie audiences sick.

Whatever you do, do NOT watch Conspiracy of Fear under any circumstances.

Definitely disagree here, I found it to be a pretty enjoyable effort, I thought the characters were likeable and found it pretty humorous, I thought Plummer was pretty solid, he's one actor who I feel has never slummed it, he always puts in a good amount of effort regardless of the film, and I really respect that about him.

BTW I like Michael Bolton(he actually used to be a hard rock singer in the 80s before he became more well-known, some of his 80s songs would've worked really well in action films)

P.S. I can give you Iron Thunder director Jay Woelfel's email address if you want to ask him some questions.

Have to strongly disagree on this one. Haha. No thanks on the email. Appreciate it though.