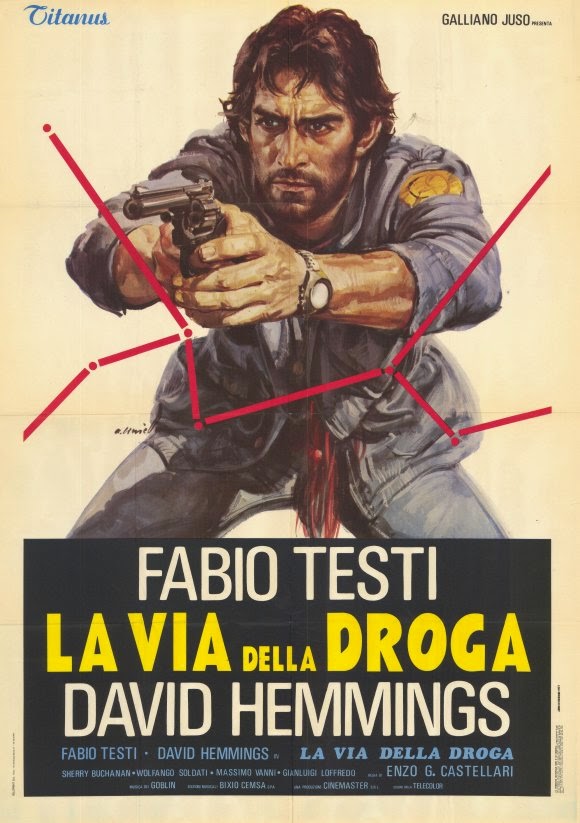 International heroin smugglers are traveling between Colombia, Hong Kong, Amsterdam, New York and Rome plying their sinister trade. Mike Hamilton (Hemmings) is an Interpol agent obsessed with stemming the tide of drugs from these professional narcotics-smuggling gangs. But he’s in his office. On the actual streets is Fabio (Testi), an undercover cop who makes plenty of enemies in the underworld. It all comes to a head when said baddies all come after Fabio, and he has to use all his wits to get away with his life. Can he do it?

There seems to be no end to the amazing contributions of Enzo G. Castellari to the world of filmed entertainment. From Light Blast (1985) to his post-apocalyptic Video Store Classics 1990: The Bronx Warriors (1982) and The New Barbarians (1983), to his Westerns like Any Gun Can Play (1967), to his trilogy of top-notch Poliziotteschi, Street Law (1974), The Big Racket (1976) and, this, The Heroin Busters, the list goes on and on. Is there anything he can’t do? When you’re adept at so many genres, that level of talent opens you up to new audiences, and many different types of film fans have a special place in their hearts for Enzo. We certainly do. 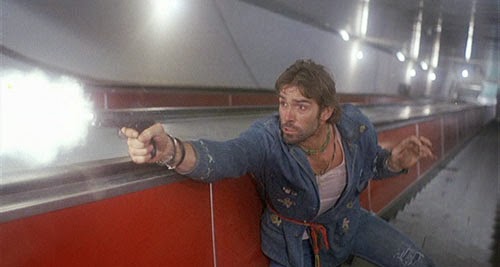 Everything is top-notch here, from the way it’s shot and edited, to the acting, clothing, set design, etc., it’s firing on all cylinders. Enzo seemed to really want to show the grossness and evil of drugs, showing the subculture not as glamorous and exciting, but as disgusting and dingy. David Hemmings puts in an energetic performance, and the icing on the cake is the typically-stellar Goblin soundtrack.

But truly the man of the hour is Fabio Testi. He seems so effortlessly cool in everything he does, and pretty much the last half-hour of this movie is him doing a lot of super-awesome things. Enzo just stacks ingenious on top of ingenious until the audience is overwhelmed. If you’ve seen it , you know what we mean, and if you haven’t, the excellent Blue Underground DVD is available, now at an all-new low price. You can’t afford to NOT see it.

The Heroin Busters is yet another jewel in the crown of Enzo, as well as everyone else involved with this fine production.

I agree. Enzo should get more respect. The globe-trotting beginning of the movie was a bit disjointed, but it ended in great action set-pieces. The flying stunts are incredible and look really dangerous. Testi is a licensed pilot and apparently did his own flying.

Love the stunts in this too. Love that Testi did that, makes the movie even better.

Maybe I will like this one more if I revisit but to be honest I didn't like Heroin Busters that much. I especially found the interplay between Testi and Hemmings to be annoying.

For me this is one of the middling films that at least doesn't totally flop in a hit and miss catalogue that marks the career of Castellari. For every Eagles Over London (great) there seems to be a Cold Eyes of Fear (not great).

In terms of crime films from Enzo I much prefer Street Law and High Crime. Street Law, especially, is ace.

I have no idea why I've been avoiding this one. Maybe I was confusing it with something else. Definitely going to check out Heroin Busters now!

Very cool movie. Looking forward to your opinion on it.