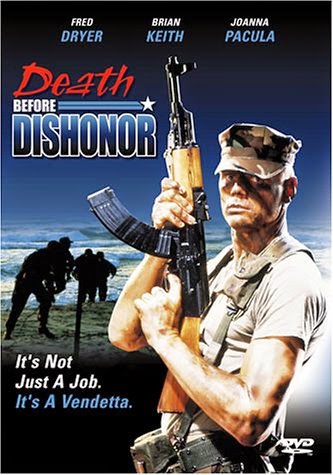 
When Col. Halloran (Keith) assigns Gunnery Sgt. Burns (Dryer) and his young Marines - including Ramirez (Gian) and Ruggieri (Mitchell) - to the turbulent middle east country of Jemal, despite the willingness of the local military to use their help, at first they don’t get to do too much. This is thanks to the politically correct, out-of-touch views of Ambassador Virgil Morgan (Winfield), who doesn’t want to step on any toes.

But Morgan, and the rest of the Americans, get a rude dose of reality in the form of a terrorist named Jihad (Tarkington) who is orchestrating acts of terror in the region. A photographer, Elli Baumann (Pacula) is documenting his rise to power. When he and his goons kidnap some of Burns’ men, including Halloran, Burns decides to take matters into his own hands and becomes a one-man army bent on revenge! Will he face death, dishonor, or NEITHER? Find out today!

Death Before Dishonor is a classic example of the Reagan-era patriotism film. It features good, noble Americans doing heroic deeds - and in this era of cynicism, irony and anti-Americanism, movies like this are not only highly refreshing, but also needed. It was just nice to see America portrayed as upstanding good guys for a change, something you rarely, if ever, see on TV these days.  Based on the subject matter, the movie is perhaps more relevant today than it was back when it was released. They should release Death Before Dishonor back into theaters! Now wouldn’t that be something? 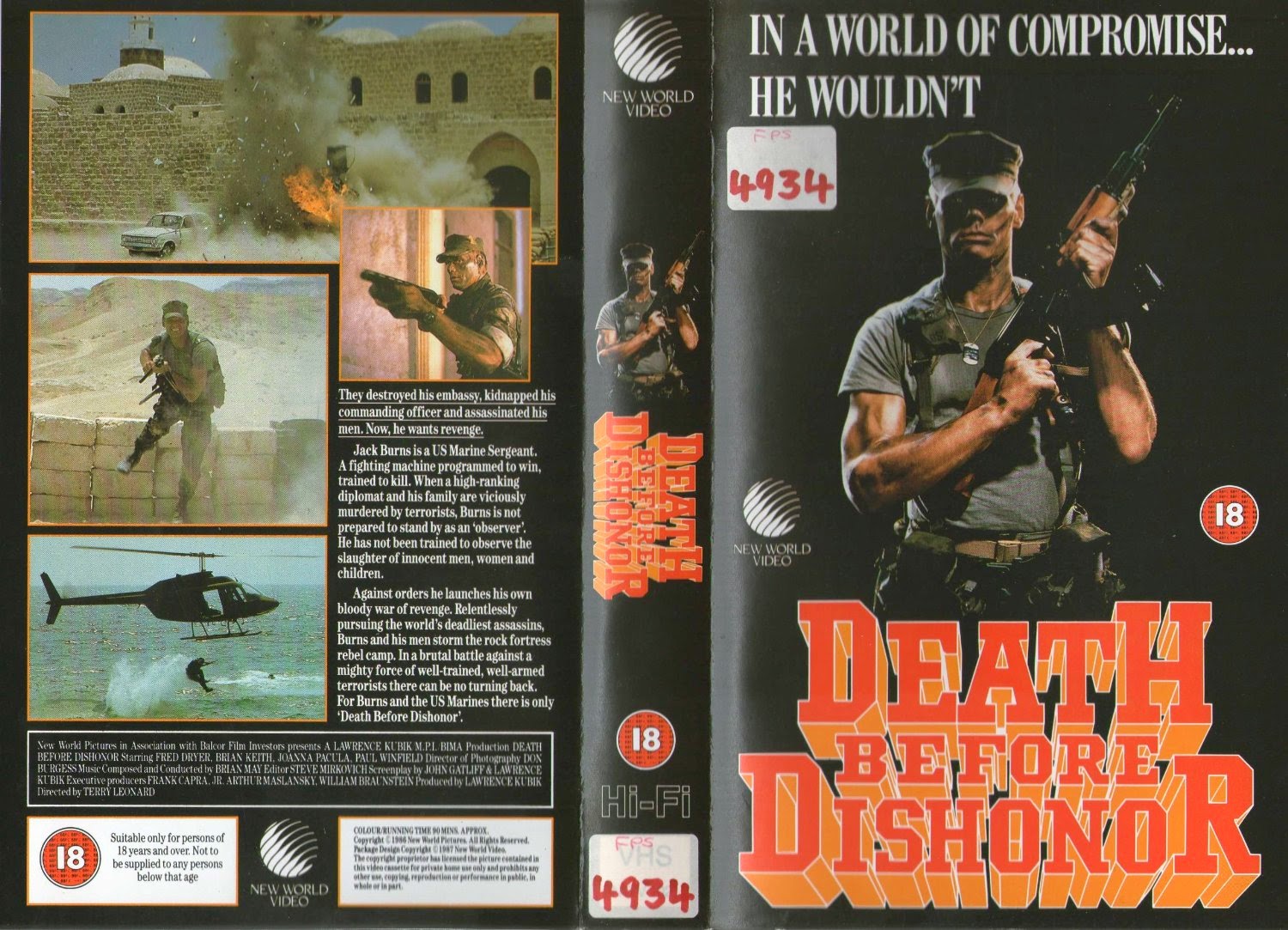 The great Fred Dryer is always cool, whether he’s initiating his new Marines (which mainly involves a lot of beer-chugging and grunting), or chasing/shooting the baddies.  The movie is peppered with little standout moments, and it all plays out as if an episode of Hunter took place in Iraq or Afghanistan. It was nice to see Dryer act out his personal vendetta, with the full might of the 1980’s-era military. Of course, you know the main baddie is really bad when his name is Jihad. Kind of a dead giveaway that he might be a dangerous Arab terrorist. Of course, there is the prerequisite machine gun shooting, as well as the prerequisite torture, but Dryer gets off some great lines and is a leader you can believe in.

It was also cool to see a young Sasha Mitchell here in the ranks, before his Kickboxer 2 (1991) and Class of 1999 II (1994) (and of course Step by Step) fame. Joanna Pacula did the best she could in kind of an unnecessary role, and an off-camera Franco Columbu is credited as “body building coach”. Because you’re definitely going to need Columbu to work your quads so you can be in the proper shape to stop the terrorist bad guys.

In all, “Death Before Dishonor” is sort of “What you see is what you get”. It’s a nice package of action where the good guys are good and the bad guys are bad. And in our uncertain, confusing times that we live in today, that’s a comfort. Recommended.

I remember watching this on TV sometimes in the late 80s, then watched it again on an army bus on VHS in the early 90s. I bought the widescreen DVD when it was released about ten years ago. A solid action movie. Dryer should have made more of this type of movies.

Got the DVD in Germany as "Helden USA" or English "Heroes USA". Brian Keith was one reason to buy it (loved him since Hardcastle or his western movies), next reason was only ACTION. Got the other "Helden USA" 2, 3 and 4 only as VHS. But this is the best of them all.

Anti-war films like Green Zone didn't do well at the box-office, but pro-war ones like Act of Valor did do very well.

Don't know what you mean by "anti-americanism", I certainly you haven't been watching FOX news LOL

Act Of Valor was pretty good! Very entertaining. Should've watched it in the theater. Haha.

the original titles of the other tapes in Germany.

Do you know some french movies like:
"Les Insoumis" (Germany: Crossfire-Unter Beschuss) The end looks a little like Carpnter's "Assault".
"In gold we trust aka 600 kilos d'or pur" (Germany: 600 Kilo pures Gold). Adventure movie
"Largo Winch" and "Largo Winch 2".
"Nid de guepes aka The nest". Another "Assault"-like movie from France.
"A bout portant"
"Mains armees aka Armed hands"
and from Germany
"Schutzengel" (Guardian Angel) from and with Til Schweiger. A rarity - wathcable action from Germany.

Thanks for the info, it's informative. In Gold We Trust is a solid movie.

In the U.S. Crossfire goes under the title "Fight For Us"