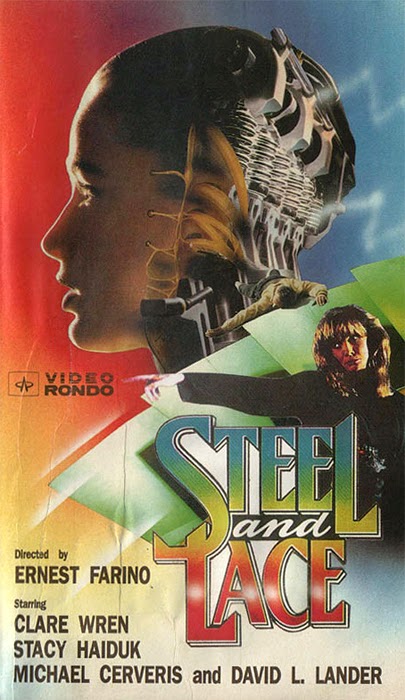 
When super-evil businessman Emerson (Cerveris) rapes a sensitive concert pianist named Gaily Morton (Wren), and thanks to the false testimony of his buddies/baddies Norman, Craig, Oscar and Toby (Backer, York, Lieber and Burkholder, respectively), Emerson gets off scot-free at the trial, and poor Gaily commits suicide. Luckily, her brother Albert Morton (Davison) is a creepy and obsessive robotics technician.

Albert rebuilds Gaily but this time outfits her with cool weaponry and a drive for revenge. She then goes after the team of evildoers that wronged her. Meanwhile, Detective Dunn (Naughton) is on the case of the mutilated men. Thanks to the help of his girlfriend Alison (Haiduk of Yesterday’s Target (1996) fame) - who is an artist and was working as a courtroom sketch artist at the time of the original trial - Dunn is closing in fast. But will Dunn stop the Morton siblings from completing their revenge mission? Or will Emerson and his gang get away with it? Find out today!

Steel and Lace sports a very cool concept: a cybernetic rape-revenge thriller that crosses Robocop (1987) with I Spit on Your Grave (1978). The whole outing is perfect for the video stores of the early 90’s. Movies like The Terminator (1984) and Eve of Destruction (1991) were renting heavily (OK, just go with us on that last example) - so why wouldn’t you want to see a beautiful woman getting revenge on some baddies and boring through their chest cavities with a robotic drill? Any teenager would have been thrilled, and now any teenagers-at-heart should equally appreciate what Steel and Lace is trying to do. The end result is entertaining and enjoyable. You gotta love it. 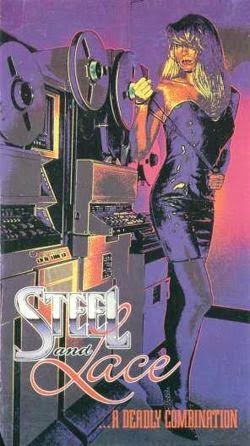 Cerveris is appropriately boo-able and hiss-able as the ponytailed main baddie. As if rape, extortion and racketeering weren’t enough, he’s just not a very nice guy. It’s kind of a dead giveaway that you’re evil if the logo for your company is a globe with a sinister-looking hand clutching it, done up in an ominous shade of red.

And you spend a lot of time in an “evil boardroom” (you’ll know it when you see it). It’s all part of the comic book-like fun. Let’s not forget we’re dealing with a cyber-revenge robot chick. On the side of the good guys we have not just the reliable David Naughton, but there’s a wacky M.E. named Herb that almost steals the show. (if there is a wacky M.E. on board, odds are his name will be Herb).

Our hats go off to SOTA FX for creating the robot and gore effects which were, well, effective. Released by Fries Home Video, if you liked Peacemaker (1990) - which was also put out by Fries - you’ll surely like Steel and Lace. We recommend it.