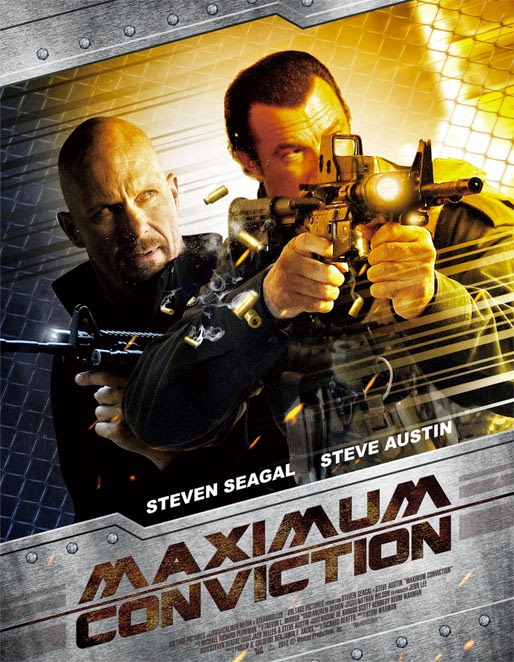 
Two ex-Special Forces soldiers, Cross (Seagal) and Manning (Austin), who are “The Best” (obviously), are assigned to go into a prison and lead two female prisoners, Charlotte and Samantha (O’Brien and Song), who clearly were arrested for their appearances in Sex and the City, out of the building to safety.

Trouble arises in the form of Blake (Pare), a super-evil baddie who wants the prisoners for his own reasons, which are not very clearly delineated. So Blake sends teams of his goons to go after Cross and Manning. As the four of them try to exit the building, the “secret identities” of the mysterious women slowly come out into the open. Meanwhile our two heroes have to use their training to fend off many attacks from the goons. Will they all make it out alive?

The good: it was interesting that Steve n’ Steve (as their team-up should invariably be called) weren’t at odds and didn’t bicker the whole time. They were on the same side, which was nice. Stone Cold certainly looks intimidating, which goes a long way, and kind of counterbalances Seagal’s painted-on, Eddie Munster hair and the silliness that arises from the fact that because the movie is so dark (apparently the budget couldn’t include ever turning on the lights - yes, it’s one of those) - and Seagal wears loose, flowing black clothing, so he just looks like a floating head a lot of the time.

That of course when he’s not wearing a backwards baseball cap and sunglasses, in a patently absurd Mountain Dew-slamming attempt to look “young”. And when you distill it all down, there’s a few minutes worth of decent material, most of it coming from Austin and Pare. 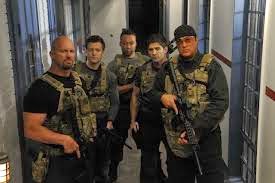 The bad news: Steven Seagal plays yet another unlikable mush-mouth who beats and mangles his fellow human beings with unnecessary cruelty and a marked lack of fun. He actually has an unlikable fighting style, if that makes any sense. Ostensibly it’s Aikido, but thanks to Seagal’s weight, his proclivity for slapping people, and the fact that he thinks he’s Asian, he truly is America’s E. Honda. But Honda was never a sadistic torturer like Seagal seems to have become in his more recent DTV efforts.

We certainly don’t want to pile on Seagal for his weight issues, on the contrary, this movie seems to be spinning his girth for the positive. For example, there are a few obvious shots of his double chin, and the character of Cross always seems to know what’s going on, regardless of his location in the movie. So perhaps, as Spider Man has his “spidey sense”, Cross has some sort of “double chin sense” that helps him. 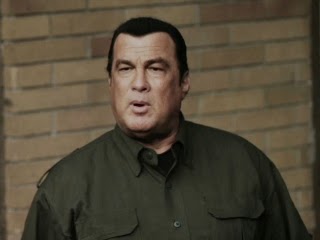 But as for the movie itself, besides the aforementioned lack of lighting, a horrible trend in moviemaking we hope goes away soon, there are lots of gimmicky editing tricks, which don’t need to be there and seem like an attempt to be “cool”. There are CGI bullet hits, among other CGI stupidity, and the whole outing gets off to a slow start, a lot of the beginning portion could have been trimmed down.

Pare is good, and we’re glad he was involved, but we would have liked if his character had more dimension. He pretty much just says “get to the extraction point” numerous times and does a generic bad guy thing. If his character, not to mention all the other characters, had just a tad bit more depth, the movie would have been a lot better overall and you’d really care.

But as it stands, its budgetary limitations show due to the fact that it was all shot in one location, in Canada no less - but the real problem is that this movie is, sadly, a product of the modern-day times. Baddies have iPads and the whole thing is just heartless and soulless.

Despite a couple of little things going for it, the overall joylessness sinks Maximum Conviction.

I really don’t want to knock Seagal movies, but when he keeps putting out stuff like this there’s no choice.

You hit on a couple of really important points about this point in Seagal’s career.

He’s so big now that he really has no credibility as a ‘man of action’. I can accept he might not be able to jump and roundhouse someone any more, but when you can’t even film him below the neck for his enormous girth then you’ve serious problems.

That’s obvious, but you mention an almost more important point. Steve hasn’t played a likeable character for years. I think we could forgive a bit more if he’s character was more sympathetic or charming, rather than the dour a-hole that’s been his default persona for about a decade.

I agree. This is just another cynical Seagal cash-in where he slaps some people around, then goes to catering, continuing Seagal's DTV slump. Imagine my surprise when the next Seagal movie, A Good Man, proved to be tolerable, mostly due to Victor Webster sharing the action with Seagal.

Disagree on Seagal's character, I found him likeable and interesting and don't think he's a "sadistic torturer" at all.

I also don't think the film was "heartless" or "soulless" in the least.

Seagal was the first American to ever open up a dojo in Japan, so I respect him for that.

That post was a healing process on the time wasted on this flick.

Exploding Helicopter: Totally agree with your points. If Seagal his standing, he can try to be likable for once.

Roger: We haven't seen A Good Man yet, but if you say it's good we'll take it under advisement. The budget probably went to the catering rather than the lighting. Agree about the cash-in.

Venom: Don't think he's a sadistic torturer? I've got two words for you: Kill and Switch. End of comment. Haha.

Snake: Thank you, we try provide therapy for the pain of modern-day DTV duds.

Eh, I really didn't see it in Kill Switch either.

What surprised me about this movie was that while the movie seemed to promise Steven Seagal and Stone Cold Steve Austin fighting side by side, in actual fact they spend very little screen time together in a scene.

Venom: There was no reason to for Steve to break that guys teeth on the bar counter. That goes a little far. Haha.

Keith B.: Seagal never lives up to his promises. When Stone Cold was on screen, the movie perked up a little.

A pet peeve of mine (up there with shaky cam and Benihana editing). The first thing producers of would-be action movies need to do is log onto Indiegogo or Kickstarter, and raise money for a basic light kit. Thrilling action isn't so thrilling when you can't see it.

Thanks for stopping by Steve! Nice comment by the way. Totally agree. We're glad there's some like-minded who have the same pet peeves when it comes to movies.

We want to SEE the action, not imagine it. We need a lighting revolt where the public demands to see what's happening on the screen.

Eh, I saw what was going on in this film just fine.

One film I do remember having really bad lighting problems is Se7en, couldn't see jack shit in that film half the time.