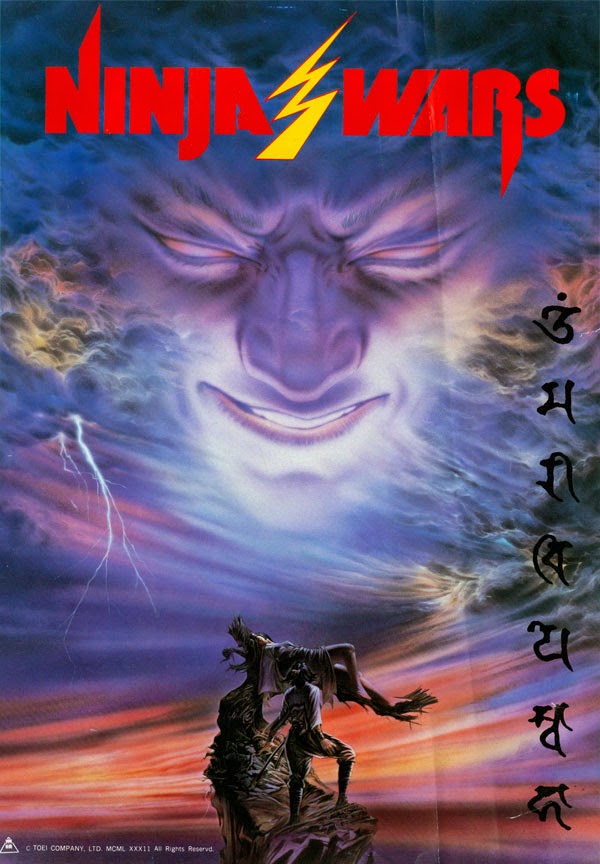 Set in the Japan of the past, Ninja Wars tells the tale of Jotaro (Sanada) and Kagaribi (Watanabe) - two lovers whose lives are violently interrupted by the evil Lord Danjo (Nakao). Because of what he’s been told, he believes that if he marries Lady Ukyo (also Watanabe), he will be the ultimate ruler of Japan, if not the world. The problem is, he needs to make his own aphrodisiac in order to seduce her, so he kidnaps her sister, who happens to be Kagaribi. Her tears are a vital ingredient in the potion.

Jotaro is not happy about this and goes on a quest to find her and rescue her, but he has to contend not just with Lord Danjo, but also his henchmen, known as the Five Devil Monks. Thankfully, Jotaro is a ninja, and he will need his skills to strike back at the power-mad Danjo and his axis of evil. Will he succeed?

Ninja Wars opens with a freeze frame, which is a promising start to a fine film - normally we’re satisfied with a movie that ends with one. But that detail aside, The Ninja Wars (or simply Ninja Wars as the big-box Prism VHS that we saw calls it - apparently the “the” was too cumbersome for them) is a very well-shot, traditional Japanese period piece.

But it also is chock full of weird, wacky and off-kilter ideas. It has a lot of the ninja weaponry and costuming we’ve come to expect, and seeing as how it is actually Japanese (as opposed to the many knockoffs which aren’t), it commands more respect from the viewer. 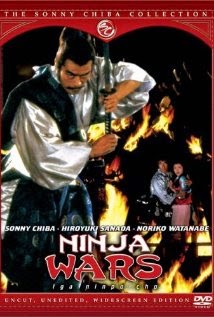 The movie fluctuates back and forth between a serious drama, complete with beautiful costumes, wonderful sets, and the aforementioned excellent cinematography, and a bizarre, fairy tale-like flight of fancy, which the flying ninjas, strange weapons, and items like the “Crescent Sword Technique”, which is like an ancient light saber, only serve to reinforce.

The dubbing on the VHS is highly ridiculous at times, especially the monks, who with their ridiculous gravelly voices sound like Cookie Monster. There are many spoken moments familiar to viewers who have seen dubbing jobs like this before: take note of the “HA-HA-HA-HA!!!” laughter by Lord Danjo and you’ll know what we mean. Speaking of the Devil Monks, apparently (at least one of them) pioneered the afro haircut. They were evil henchmen, and fashion-forward.

Ninja Wars was a Toei production, known today mainly for having a barely-noticeable appearance by Sonny Chiba. We didn’t even know he was in the movie before going into it, and frankly, it doesn’t matter. We were mainly drawn in by the amazing box art, and during the golden age of the video store, when the Ninja Boom was in full swing, you had to do something to stand out from the many competitors. Prism definitely did.

But the fact is, Ninja Wars is more than a simple ninja movie, and couldn’t be farther away from the epics of Godfrey Ho. Granted, we like Godfrey Ho, but this really shows the range and diversity even within the Ninja Boom, that we could get things on opposite ends of the spectrum like this and one of Ho’s movies. That’s one of the reasons why ninja movies of the 80’s are well worth exploring today. Like a lot of movies of any kind, however, Ninja Wars loses a bit of steam towards the end, but it’s still well worth checking out.

For a Ninja Boom-era movie with more, Ninja Wars should be what you’re looking for, and now that it’s on DVD, it’s easier to find than ever before.