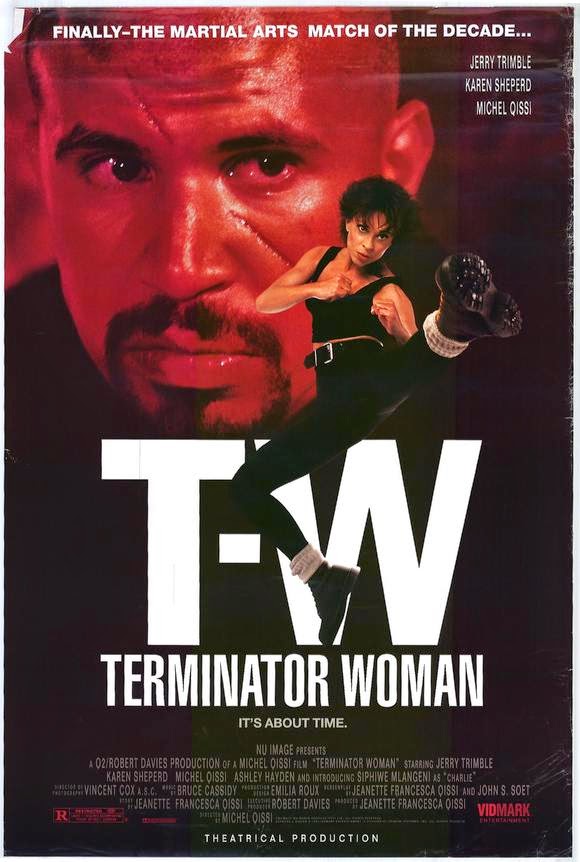 Sgt. Jay Handlin (Trimble) and Sgt. Julie Parish (Sheperd) are cops with an ongoing rivalry about who is the better Martial Artist - but could there be some sparks flying in the romantic department as well? In the midst of trying to figure these things out, the pair travel to Africa of all places to try and bring down crime lord Alex Gatelee (Qissi).

Consequently, they get into a ton of fights and face some other trials and tribulations - Julie is kidnapped, Jay has to reject the advances of Gatelee associate Myra Bolo (Hayden), and so forth. After enlisting the help of some locals, their Martial Arts abilities are truly put to the test when they face the ultimate showdown - Gatelee himself, of course. Will Jay be Handlin business? Find out today...?

Terminator Woman, not to be confused with Lady Terminator (1989), is professionally-shot and competently made - could it be a coincidence that this was not one of Trimble’s Roger Corman-produced actioners? That being said, the pacing is off and things get a bit dull at times. If about 10 minutes were lopped off, this whole outing might have a bit more verve to it.

But the leads are all top-notch: You’ve got fan-favorite Trimble, who, in the most complimentary sense, resembles a more meatheady Emilio Estevez, and his trademark raspy voice is instantly recognizable. Then you’ve got fellow fan-favorite Sheperd, an enjoyable screen presence whose Martial Arts skill is excellent and wonderfully captured here. Finally, there’s Qissi, who also directed the movie, who very convincingly plays the baddie. So those are the movie’s strengths and weaknesses for you, and they fight it out - like everyone else on screen - throughout the running time. 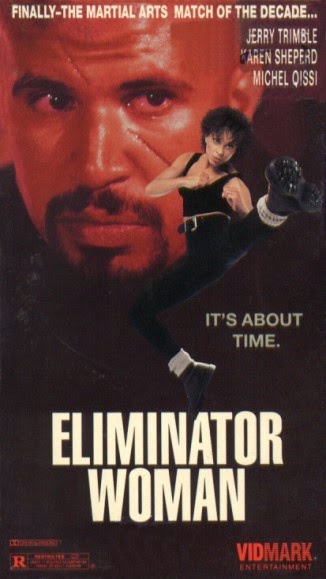 Generally speaking, we don’t really care for ‘Africa Slogs’, as we call them, but this one is tolerable, thanks mainly to the aforementioned leads. The Trimble/Sheperd team up was an inspired choice, and it might remind you of similar pairings, such as Richard Norton and Cynthia Rothrock in the Rage and Honor diptych, or Steven Vincent Leigh and Sophia Crawford in Sword of Honor (1996). If nothing else, the movie as a whole plays to the strengths of the leads, and there are plenty of fights - as well as some good-natured stupidity - to prove that.

The whole thing is very 90’s - just witness the scenes at the Backlash club for proof. Maybe it’s an Africa thing, or maybe it’s an action movie thing, but it’s hard to imagine a dance club in the U.S. being named “Backlash”. It’s a bit too angry for us.

Judging by the large “TW” logo on the U.S. VHS box art, perhaps the filmmakers were attempting a bit of branding: this is the one and only TW, and in their ideal world, people would ask each other around the water cooler, “have you seen the latest TW movie? I did, and it was awesome.” Latest, because surely more TW’s were planned. As it stands, presumably Sheperd is the TW, but the movie isn’t solely about her and her quest. Trimble is an equal part, and they didn’t call the movie “Terminator Man” - though, to be fair, Steve Railsback is the true Termination Man. Schwarzenegger ranks somewhere in there too, I’m sure.

In the midst of all the action, Trimble finds time to do a spontaneous shirtless Martial Arts workout/display alone in his hotel room whilst wearing tight jeans. The only outfit a 90’s action star needs.

I tend to enjoy films set in Africa(Danger Zone being one example).

This early Nu Image effort is an OK movie, but the low budget shows. Myra Bolo is no Bolo Yeung. The scene I remember most vividly is the nightclub scene in Backlash, which was the working title for the movie.

Roger: Didn't know Backlash was the working title. Thanks for the info. Interesting to think the movie would be named after the club. Haha. Terminator 3, 4 and this new one with the lame title, they don't exist. The only real Genisys is the Sega GENESIS.

Disagree on Terminator, I personally enjoyed 3 and 4 and am really looking forward to the new one.