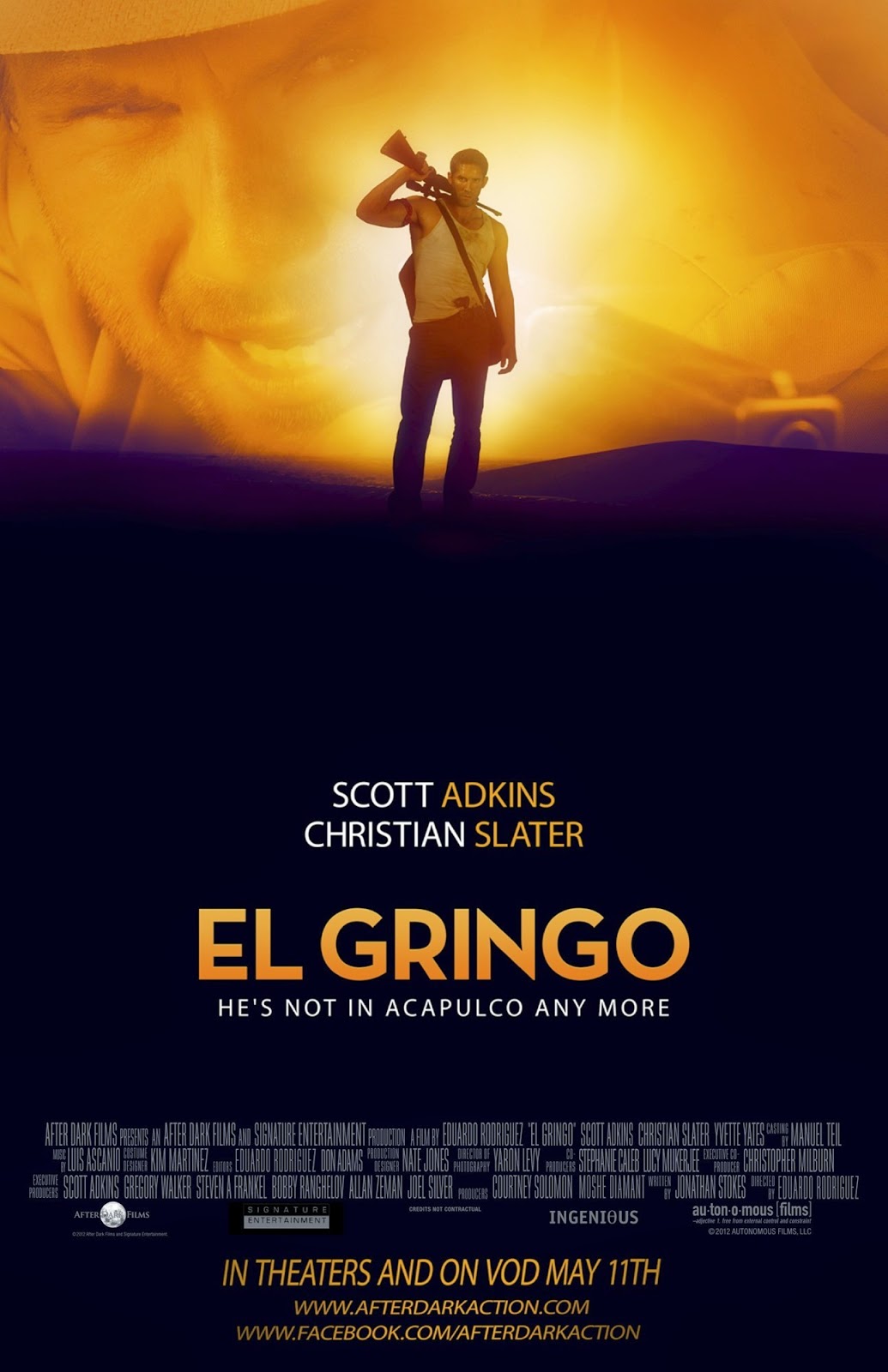 
A mysterious man, known only as “The Man” (Adkins) arrives in the small Mexican town of El Fronteras with a duffel bag filled with cash. He finds the town less than hospitable, and as the local gang tries to steal his loot, through a series of flashbacks, we find out how he got into this predicament. With Lt. West (Slater) of the New Mexico police crossing the border to go hot on his trail, The Man has plenty to contend with, but with the help of local barmaid Anna (Yates) he just may ride off into the sunset with everything he wants. But can this happen in such a violent place?

Sadly, very sadly, we found El Gringo to be a disappointment. You’d think having Scott Adkins and Christian Slater in a movie together would be a surefire winner that could overcome any potential drawbacks elsewhere. It turns out that assumption was incorrect, and you know what happens when you assume. The problem is, it’s weighted down with those annoying modern, overly-slick editing tricks that we’re not in love with, to say the least. Why directors and editors feel they need to do this remains unknown. (It should be noted that the editor’s name is Don Adams, and he does indeed need to get smart). They must think it’s helping, but it’s really, really not.

With a bunch of quick cuts, seizure-inducing flashes, CGI all over the place, and self-consciously “wacky” music and situations, the movie dooms itself. The whole outing has a vibe that it’s trying super-hard to be cool, but it’s trying too hard. All it had to do was let the magic of Adkins and Slater happen. And get out of the way. But its obsession with being a post-Tarantino irony-laced jaunt puts the kibosh on that. 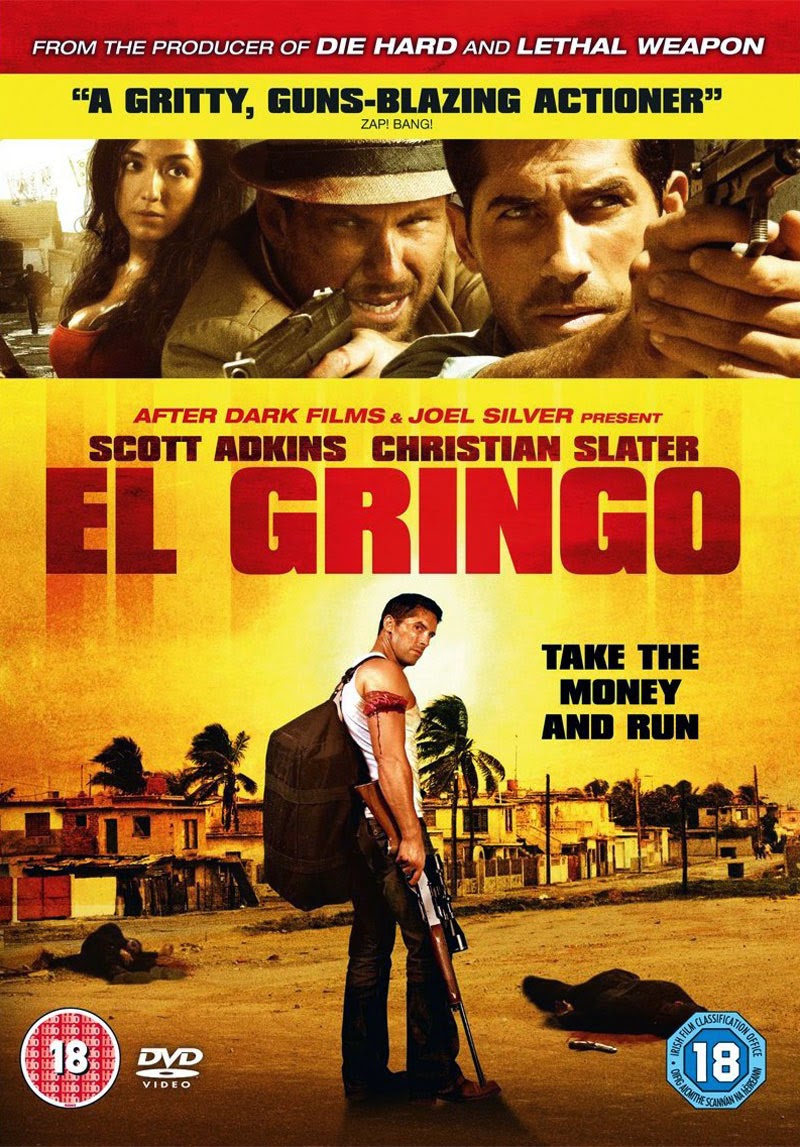 And it had so much potential for being genuinely cool. The movie sabotages itself by setting up a potentially cool situation, then squelching it, almost out of spite. So it sets itself up for failure, because even if something awesome does indeed happen, the overall tenor ruins it, because you can’t go back and un-see what uncoolness you just saw.

And at 103 minutes, it wears out its welcome. Besides having to witness the character of “The Man” (which isn’t at all stolen from Sergio Leone) in a variety of situations frustrating to him, the viewers also get frustrated. The whole thing has a distasteful Missionary Man (2007) vibe, and director Rodriguez even made a movie with Dolph, Stash House (2012), which is acknowledged to be one of Dolph’s worst, even worse than Missionary Man.

Of course, Scott Adkins is always boss, and he does execute some outstanding moves on the baddies in the beat-em-up scenes, but, ultimately, it’s very hard to care. Despite some classics like the “walking away from an explosion” and the “sideways jump/dive while shooting”, it’s just not enough this time. Even the fruit cart cliche is here. But a dud in the Adkins canon was bound to happen eventually, as he has had a long string of winners, and no actor, or gambler for that matter, has had an unbroken streak. But perhaps the most unsettling thing about this particular Adkins performance is that his distinctive British accent is gone, in favor of an unnecessary American voice. Just another El Gringo misstep, it seems.

Speaking of missteps, there’s the matter of the title song. One of the best and most noteworthy aspects of the movie was the song by Manowar, but it’s only heard during the end credits. It would have been awesome to hear it during a shootout or training sequence. But no, another wasted opportunity. Despite the titans Adkins and Slater, there’s actually very little to recommend about El Gringo, as much as it pains us to say it.

Don't agree!!!!!
It is entertaining, some good action sequences. Humor wasn't the best.

Ouch!! What a waste man. When will directors learn that all that easy and flashy quick-edit crap has overstayed it's welcome?!

Great review and thanks for the heads up! Cool concept, but sounds like a waste of celluloid.

Harry: Adkins and Slater were solid, but the movie around them was not.

RobotGEEK: We're waiting for the day when filmmakers wise up. Thanks for the kind words. It is a waste of talent.

I completely agree. I expected much more from a movie with Scott Adkins. On the other hand, Ninja: Shadow Of A Tear (and The Raid 2) were my favourite movies last year.

Strongly disagree here, I thought this was a pretty cool film.

I honestly didn't even know Adkins was British, so I didn't notice any accent issues here.

Personally I didn't think the film was "trying too hard" at all, I didn't have any issues with the editing and I had a great deal of fun with it.

We wished this was better. If it had no editing tricks and weak dialogue and just let Adkins and Slater do their thing, this could've been a winner.