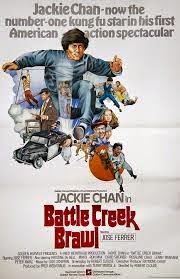 
Set in the 1930’s, Battle Creek Brawl is the tale of one Jerry Kwan (Jackie), a young man who loves Martial Arts. When the classic gangsters of the day threaten his father’s restaurant, Jerry fights back, finally using his much-practiced skills. Head mobster Dominici (Ferrer) sees his abilities as a fighter and, using strongarm tactics like kidnapping and threats, forces him into participating in the “Battle Creek Brawl”, an event in Texas where the top fighters of the day go at each other in a big free-for-all. While he does have allies like Herbert (Mako) and his girlfriend Nancy (DeBell) on his side, it’s going to take all of Jerry’s tenacity to beat strongmen like Billy Kiss (Haggerty) who is known for his infamous “kiss of death”! Can Jerry do it? Find out today...

Battle Creek Brawl is an interesting spin on the Punchfighting genre. Not only is it set in the 30’s, with all the period garb and cars that would entail, but we also liked the idea of a town-wide Punchfighting event. The aptly-named Battle Creek, as a whole, comes together in the streets to watch the grown men pound on each other. So rather than take place in a dank cellar, it’s out in the open with the whole town watching. We thought that was a nice difference. The “forced to fight” plot we’ve seen many times before, most recently in...well...Forced To Fight (2011), but this came out an amazing 31 years before that, and of course features a young Jackie Chan in the lead, who you can’t help but love. 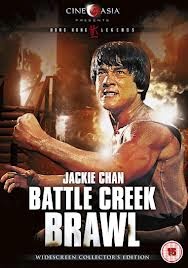 We’ve always been fans of Jackie, and while this is such an early American movie for him, his English would improve in later years, his humorous/acrobatic/highly enjoyable fighting style is on full display. Because the plot of the gangsters taking over the restaurant is so similar to fellow Golden Harvest production The Return of the Dragon (1972), it could honestly be said that Jackie was taking over the mantle of top Martial Arts star worldwide from Bruce Lee. Jackie’s rigorous training sequences are here as well, something he brought over from Asia.

Jackie is backed up with some great co-stars: the ever-present fan-favorite Mako is on board, as is the cute Christine DeBell as Jackie’s girlfriend, and a young Larry Drake as well. And of course Jose Ferrer as the main baddie. But who could forget H.B. Haggerty as Billy Kiss? He has a black cape that says “KISS” in huge letters, and his finishing move is to make out with his burly male opponent. How much of that Gene Simmons borrowed from, we’ll never know. But the period setting and the way he looks must have influenced Van Damme for The Quest (1996). JCVD’s final villain looks very similar, and is even played by Michael Qissi! Coincidence?

Another difference between this and the much-later Forced To Fight is that this has clearly identifiable fighters with their own personalities and quirks. The FTF baddies are generic thugs. See that review for a further discussion on how Punchfighting opponents have gotten more generic over the years.

The Lalo Schifrin music is typically excellent and raises the bar for the movie as a whole. Other highlights include the roller skating scene, and the fact that the crowd chants “Jer-ry! Jer-ry!” many years before Springer. Maybe they’ve been chanting for Jerry Kwan all along.

In racism news, perhaps no other movie we’ve seen has had characters that say the word “chink” quite as many times, and by as many different characters, as Battle Creek Brawl. Maybe that was the only epithet they had back in the 30’s. It was during the depression and all. But the movie as a whole is lighthearted fun and it’s all done very well and professionally.

Finally after years of awful-quality VHS tapes, a widescreen DVD was released in 2004 by Fox. Pick this up, and get your Jerry Kwan on today.