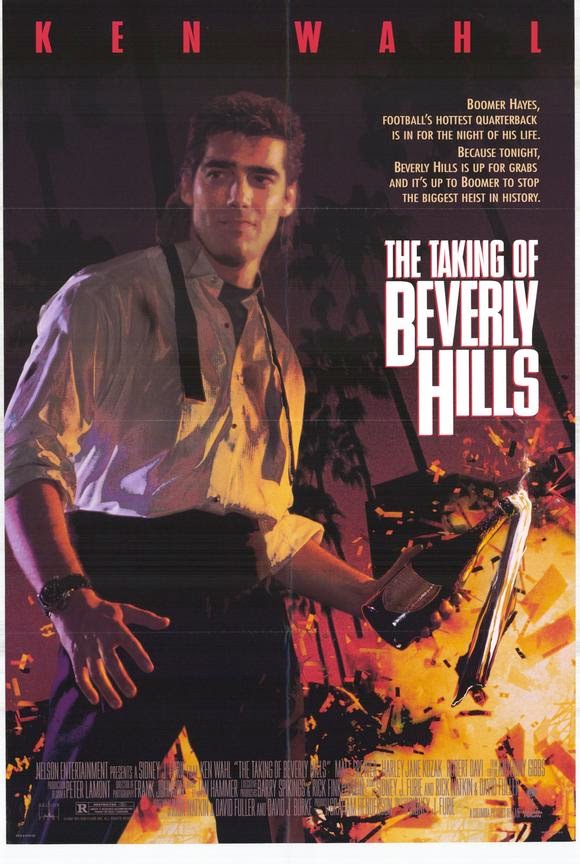 
Boomer Hayes (Wahl) is a big stupid meathead named Boomer Hayes. He happens to live in Beverly Hills, California, which, to his dismay, is being “taken” by Lee Ving and his gang of fraudulent cops. They organize a fake chemical spill in order to get the uber-rich out of their tony mansions so they can then steal all their expensive stuff.

Seems like a great plan, right? Well, Boomer Hayes reckons he can put a stop to it. Utilizing all the skills he learned on the gridiron, as well as all the intelligence that would imply, he teams up with real police officer Kelvin (Frewer), who originally was with the baddies but defected back to the good guys. Masterson (Davi) is the mastermind of the operation, and Boomer’s quest involves saving the love of his life/woman he just met that night, Laura (Kozak). Will Boomer single-handedly take back Beverly Hills?

Right from the jump, something seems off about The Taking of Beverly Hills. Sure, it’s a “DieHardInA” movie, but its low-budget, shot-in-Mexico vibe is clearly evident, and the scenes almost feel like they’re in the wrong order, or something. Beginning with an unnecessarily long intro/credits sequence/travelogue, and continuing through to the mixed-up scenes, bad humor and amazingly inane dialogue, not to mention the generic aspects of the plot, The Taking of Beverly Hills is one big - as Boomer might say - fumble.

It’s not that the concept of a Die-Hard-In-A-Town that has to be saved by an ex-footballer is a bad idea per se, it’s the pain of seeing a potentially awesome movie fall apart right before your very eyes. We hate to see when an idea isn’t properly capitalized on, and here is a prime example.

The problem is you’re not invested in the characters, and you can’t really care about Boomer as a triumphant hero. He’s so much of a meathead, he can only think in terms of football analogies to anything that happens to him. So while there are a bunch of cool explosions, car stunts, shooting and general blow-ups and mayhem that ensues, it’s really all for naught, because we don’t really care anyway.

We really, really wanted to care. But the movie wouldn’t allow us to. Matt Frewer played the typical, whining “regular guy” caught up in the action situations. There’s always a complainer. During a car chase, you know a movie is poorly written when the sidekick says something like “I think this is a bad idea!!!!!” Scooby-Doo has less audience-insulting dialogue than that. The end result is that Boomer Hayes is no more than a talking mullet.

So while Wahl’s mullet is both extraordinary and distracting, Branscombe Richmond attempts to steal focus away from whatever that is that’s on Wahl’s head by driving a tank and screaming while shooting a flamethrower. While those moments were indeed cool, the overall tidal wave of dumbness washes over every second of the movie.

As far as the music, we liked the Jan Hammer score, and of course there is the time-honored sax on the soundtrack as well, but there are all these weirdly unnecessary hits of the day on the soundtrack too. The filmmakers must have paid a bundle for them. At random times we get EMF’s “Unbelievable” and Faith No More’s “Epic”, almost as if a little punk 14-year-old snuck into the editing room after hours and added them on as some sort of prank. But then again, you haven’t heard Janet Jackson’s “Black Cat” until you’ve heard a snippet of it tacked-on to The Taking of Beverly Hills.

The long career of director Sidney J. Furie is spotty at best: there’s the good, Direct Action (2004), the okay, The Rage (1997), and the downright awful, Detention (2003). The Taking is quite mediocre and appears no one really had much faith in the project. Fan favorite Robert Davi does what he can, and we loved seeing him brandish a crossbow, but for much better Davi, see The Dangerous (1995) instead. You’d be “Taking” up a lot of your valuable time if you waste it on an unfortunate dud like this.

Have to very strongly disagree with you here, I had an absolute blast with this film and I personally did care about Wahl's character and I thought Frewer was funny as the sidekick.

I'm shocked you guys did not enjoy this one at all. I, for one, loved it. As did everyone else I showed it too. I guess it's the whole funny dialog, crazy stunts, Ken's mullet, shit ton of explosions with football humor that they enjoyed. Sure, it was absolutely down-right stupid, but I thought it was a fun flick. However, the final confrontation between Wahl and Davi was very anti-climactic and just hands-down shamefully disappointing,

Missing the logic, but i like Wahl and the Action. Destroy all without CGI and Transformers.

Is is happenstance or do want to let me see that the movies i loved twenty or more years ago are only a crap, haha? What do you think about "Opposing force" with Roundtree?

Can't wait for this

I enjoyed it (but will admit that it suffered from too many 'music' moments, during the carnage)
Although, I wouldn't say that a $19m budget was 'low' for 1991?

Venom: We enjoyed Direct Action and The Rage. This one was just badly directed and edited. Could've been a solid movie. We liked Wahl in The Solider.

Brosnan: You're right, the confrontation was weak. Huge waste of Davi.

Harry: Saw Opposing Force a long time ago, wasn't bad at all. Definitely want to see Everly and The Gunman. Both look like solid action films.

Lee: The 19 million was probably used for the mullet and the music rights. Haha.

Um, you list "Direct Action" as a high point of Sidney J Furie's career? Seriously? I thouhgt it was much worse than "Detention". It looks incredibly cheap and was very dull. The industrial urban settings gave it a very cheap and dull look to it, and thousands of rounds of ammo are fired at cars without any bullet holes.

It's probably his worst action movie, I think.

That was silly with the bullet holes in Direct Action, but Dolph was solid and some of the action was fun. Way better than Taking' in our opinion.

Yeahhh... this is one review that I sadly have to disagree with. The Taking of Beverly Hills was almost as much fun as Commando. Sure, many aspects of it are flawed. But I forgive this stupid movie, because it had me grinning like an idiot the whole time. That, and any movie that has a jump with a bullet-riddled Rolls-Royce gets my honest praise.

I've said to people before that 1991 was a CRAZY year for action movies. Not just this, but also Stone Cold, The Hard Way, Run, The Last Boy Scout, Showdown in Little Tokyo, The Perfect Weapon, McBain, etc... I wonder if Terminator 2's success had just pushed everyone to bring out as much madness as they could.

strongly disagree, I thought this film was very well directed and edited

Stunt Fan-yeah i'm with you, 1991 was a damn good year for action films, don't forget Double Impact and Out for Justice.