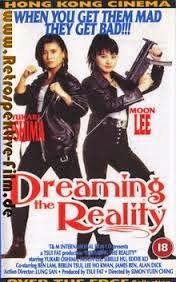 While under the care of their foster father named Fok (Eddy Ko), two young girls, Silver Fox, and her Sister (who will later grown up to be Moon Lee and Yukari Oshima, respectively) are trained in the ways of guns, assassinations and killing. Fok is a ruthless gangster boss who thinks nothing of using his daughters to eliminate anyone who he sees fit. But one of them may not be cut out for the life of a covert assassin...which one will it be?

Meanwhile, a woman named Sister Lan (Hu) and her brother Rocky (Lam) are big boxing fans. Rocky tries his hand at the Thai boxing style and is successful, but falls under the spell of a diabolical promoter named Mr. Chin. When the two killer sisters go to Thailand and end up crossing paths with the other two siblings, the stage is set for an action-packed finale in which true motivations are revealed. Who will be living in the real world and who will be DREAMING THE REALITY?

Dreaming the Reality was another one of those elusive titles that was hard to find in America. The title doesn’t even seem like it would be for an action film. But indeed it is, and it’s a cross between an assassin movie and a boxing movie.

It was about time someone mashed those two things together. There’s nothing wrong with that, however, and the movie has that early-90’s HK feel we all know and love. There’s more than enough shooting and fighting to satisfy just about anyone, and fans of this genre especially should be pleased. Especially with the trio of Yukari Oshima, Moon Lee and Sibelle Hu at the forefront. This was the height of the Hong Kong “girls with guns” craze, and here is another prime example. Oshima and Lee do look very cool with their sunglasses and trenchcoats. Sibelle Hu is the sort of tomboyish “normal” girl. But the three of them are truly the selling point, along with the action scenes of course. 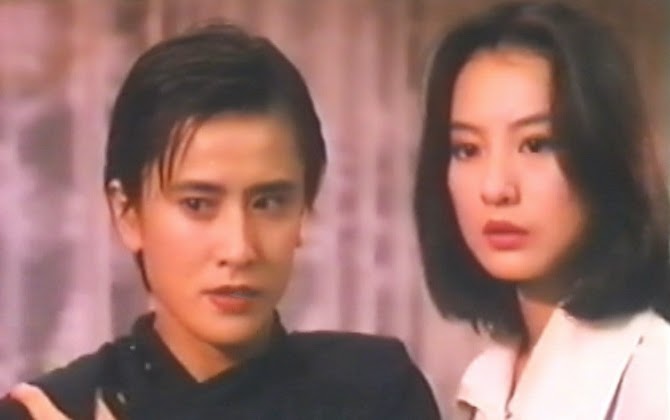 There are some extended boxing sequences that get kind of repetitive and numbing after a while, which is probably the only real negative we can say about Dreaming the Reality. They tend to slow down the pace of the movie, and at 98 minutes, something could have been trimmed.

Of course, plotwise, there are plenty of twists and turns along the way, and an action movie from the early 90’s wouldn’t be complete without a sought-after floppy disk. In this particular case it’s orange, which makes for a nice visual change from the usual black.

There’s not much more to say, really...fans of HK action cinema will surely enjoy it, and even non-fans could potentially find something in it for them. It’s a solidly entertaining movie, but it’s hampered somewhat by some pacing problems. If you can find it inexpensively, we say check it out.

I found this flick too flawed to be enjoyable. The primary offence is the severely under-cranked (sped up) action scenes; I kept expecting Alvin and the Chipmunks to save the day complete with superhero capes. The excellent cast includes Moon Lee and Yukari Ôshima who are much better presented in Angel (aka Fighting Madam, Iron Angels, Midnight Angels) which is a superior film in every aspect. There Yukari Ôshima plays one of the most salaciously evil and sadistic women villians ever to infest any cinematic venue. It's sequel (featuring an improved performance by Moon Lee) is even better overall but it doesn't have Yukari Ôshima, alas.

You make some good points. Haha about the chipmunks. Will have to look into the sequel.