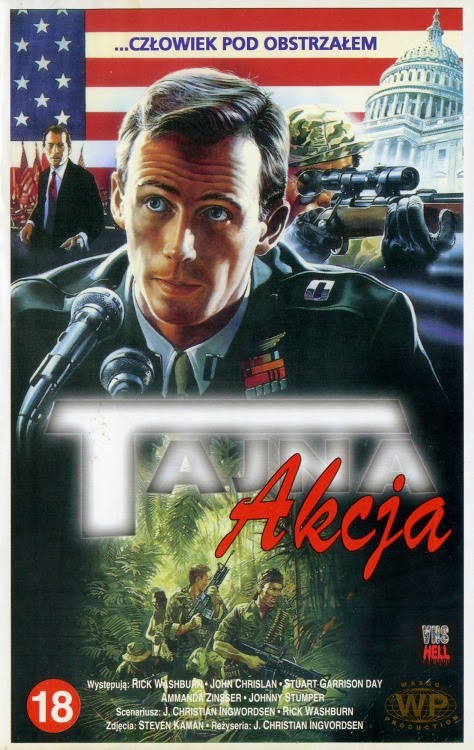 
When a senator who looks a lot like Jerry Seinfeld named Sen. Stumper (Stumper) begins the process of grilling Vietnam vet Frank White (Ingvordsen) in front of large audiences during a big congressional investigation, the heat is really on. Apparently, a Central American diplomat was shot by a sniper, and attention turned to White, even though a mysterious soldier/sniper named Rick Burns (Washburn) is heavily involved in a conspiracy that potentially could go all the way to the top. Through a series of flashbacks, we gradually get to the truth. But what will it all mean?

Even we’re not sure why we keep watching these Ingvordsen-Washburn-Kaman movies. Perhaps it’s because they were lesser-known contributions to video stores in the 80’s and 90’s, and there’s something interesting about that. And some of them aren’t that bad, like The Outfit (1993). So when we see one, we usually give it a try.

Covert Action is a political drama with some action elements in the flashbacks. Some of the ‘Nam battle scenes are okay, even though they don’t have a lot of personality or pizazz, much like the rest of this outing. But still, there’s the Prerequisite Torture of the hero. Who of course is shirtless. No one ever forgets that, unfortunately. 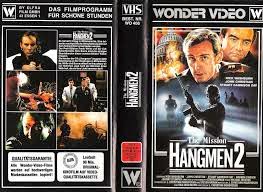 The action in this movie is indeed covert, as in, we couldn’t really find it. But that didn’t stop the filmmakers from recycling some footage into Cyber Vengeance (1997). Some of that footage even includes Senator Stumper, a guy whose real last name is Stumper. Apparently they couldn’t let a name like that go to waste. (Even Rick Washburn plays “Rick Burns”, apparently just taking out the wash and adding an S. Great.) But as previously noted, he looks alarmingly like Seinfeld, and you think at any moment you’re going to hear some poppin’ bass and Stumper say “what’s the deal with political corruption?”

So while the sniper subplot was mildly interesting, it can’t really compare with higher-budget efforts like Sniper (1993) and Decoy (1995). Or, maybe it can. In all honesty, it could have competed, but characters weren’t developed enough, which is surprising considering how talky the movie is overall. So despite some of the war-shooting and all that, Covert Action is ultimately old-fashioned, dry, and, sadly, boring.

So if you want to see a political thriller/war movie on a low budget, by all means check it out. But its flaws are many. Some energy and character development would have worked wonders. But because those are largely not present, Covert Action is condemned to the lost video store shelf of history.

Ingvordsen films are a mixed bag for me, I enjoyed this one but thought The Outfit was mostly garbage.

We agree on his movies being a mixed bag. The Outfit is one of his better ones in our opinion.

Actually, Cyber Vengeance didn't have any footage re-used from this movie. That was actually Absolute Aggression, which also deals with virtual reality. And those two are not the same film as one another, despite sharing the same Virtual Reality plot elements.

Appreciate the insight. Thanks!

Johnny Stumper was also in Comrades in Arms, Search and Destroy and Mob War.

He is an known associate of Ingvordsen. He should play Seinfeld in any upcoming Seinfeld biopics.