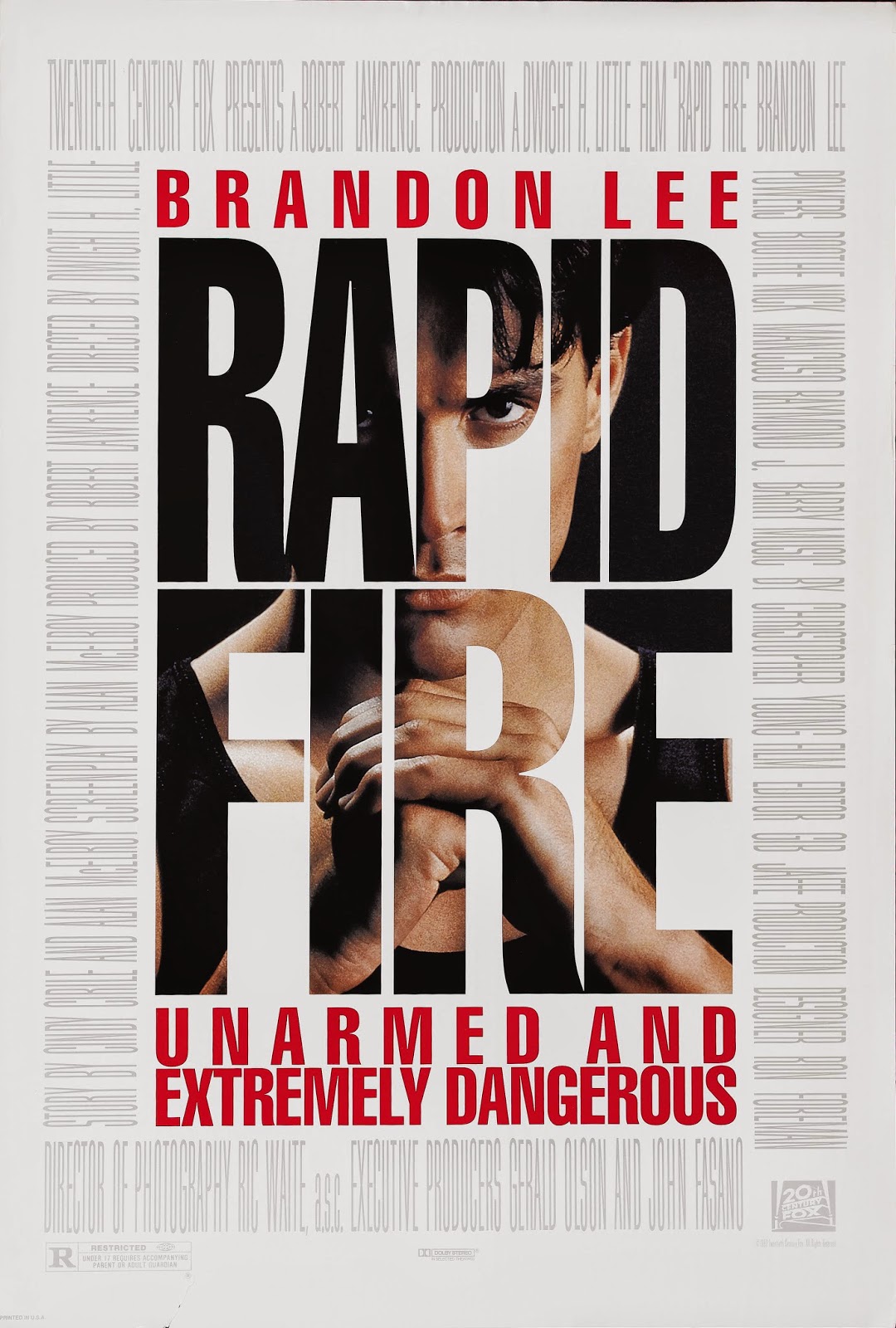 Jake Lo (Lee) is a sensitive art student who exorcises his demons from his father dying in the Tiananmen Square massacre by drawing nude women with imaginary dragons floating behind them. All seems well for Jake until he witnesses arch-baddie Antonio Serrano (Mancuso) killing some of his rivals at an art opening. Soon, the Italian mob and the Chinese triads are both after Jake's head.

Thankfully, with the same hands he uses to paint and draw, he can also use to pain and draw blood from the baddies! When he's shipped temporarily from his native L.A. to Chicago to help badass cop Mace Ryan (Boothe) fight the drug lords, at first he's reluctant, but, Lo and behold, he eventually throws himself into the role of hero. Will Jake Lo come out of this mob war alive? Find out today!

Rapid Fire is classic 90's-style action all the way, and thank God. It's movies like this that keep us energized and coming back for more. The more Rapid Fire-like movies we see, the more we grow to despise the quick-cut/CGI garbage being churned out today. This is all Lee, baby!

His fight scene with Al Leong is a killer, as are Lee's other beat-em-up scenes, which feature awesome stuntwork and ace Martial Arts. Looking at the credits, a veritable town of people worked as the stunt crew, and as far as we can tell, they all acquitted themselves admirably. The whole outing has a glossy, theater-quality look and feel that reminds you of the good old days when winners of action movies like this came to the theater, were big hits on video and cable, and leave you wanting more. So many movies are agonizing slogs - with Rapid Fire, the time melts away. Why can't it be the other way around? Why can't it be that movies you enjoy seem to last a long time and the bad ones go quickly? Ah well, such is life. 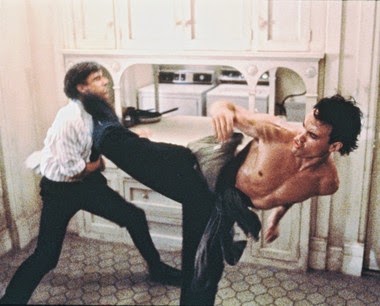 It even starts with an old-school opening that they just don't do anymore. It's the main hero, in this case Brandon Lee, executing his moves against a black screen, in an independently-shot sequence that has nothing to do with the plot, it's just a cool visual exercise to get us ready for the proceedings.

It has a perfectly simple plot that never flags, and the humble charm of Brandon Lee carries a lot of what we see, and he's counterbalanced by the grizzled Powers Boothe as the awesomely-named Mace Ryan. You'd think a Chicago cop named Mace Ryan would be worthy of his own movie. Sadly, it never materialized. But in a weird coincidence, Boothe co-stars with Raymond J. Barry, and the two were both in Sudden Death (1995) together. It truly is a small action movie world. 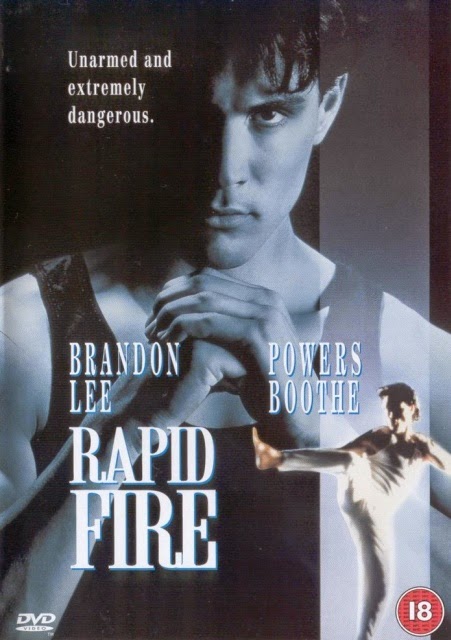 Brandon Lee, as Jake, is a classic 90's coolguy: with his motorcycle and leather jacket/vest, we called him Mr. Awesome throughout most of the film. Nick Mancuso is always great, and he plays the stark-raving baddie with aplomb, executing some classic lighthearted racism you just can't do anymore.

Add some time-honored sax on the soundtrack, as well as some songs by the band Hardline (they get TWO songs, one of which appears in the trailer. You'd think this dedication to Hardline would have given them better visibility, even back then), and you have an unqualified winner. Director Little also did Getting Even (1986) of 'Tag Taggar' fame. Too bad he didn't do more movies like these. But we should be happy with what we have. And Rapid Fire has become a staple movie from the golden age of modern-day action. Now that it's available as an inexpensive DVD, there's no excuse not to own it.

I haven't seen this movie, but the following lines in the review:

" ... Thankfully, with the same hands he uses to paint and draw, he can also use to pain and draw blood from the baddies! When he's shipped temporarily from his native L.A. to Chicago to help badass cop Mace Ryan (Boothe) fight the drug lords, at first he's reluctant, but, Lo and behold, he eventually throws himself into the role of hero. ..."

This site is fantastic. Keep up the great work, gentlemen!

Thanks! We really appreciate the kind words. Definitely check out Rapid Fire when you can. It's a blast to watch.

It's too bad Lee died before this could get a sequel.

Hardline are still around but their one of many 80s hard rock bands that never hit it big(though vocalist Johnny Gioeli did get more recognition with his other band Crush 40, who performed many songs for Sonic the Hedgehog video games)

Very interesting, didn't know that. Thanks for the info.

Rapid Fire is a great action movie and Hardline is a great band. Nowadays, the only original member is Johnny Gioeli, who is more famous as Axel Rudi Pell's vocalist. It's amazing to think that this went to the theaters in the 90s when there are almost no R-rated action movies in the theaters these days.

The 80s and 90s were a great time. Action movies every week! Now we barely get 1 or 2 good action films a year. Love Hardline too.

I think we still get plenty of good action films, Kingsmen the Secret Service was pretty cool.

Haven't seen that yet. But did enjoy John Wick, The Equalizer and The Raid 2. We need more Hard R-action all the time, instead of 3-4 a year.

True dat, i'm hoping we get a Bad Boys 3 one of these days.