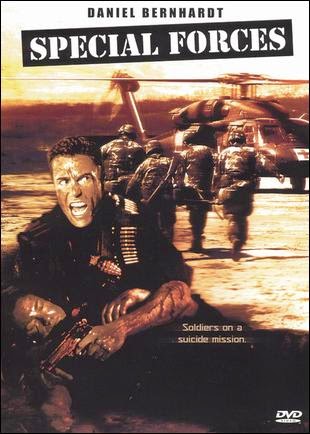 
Rick Halsey (Bernhardt) is a CIA agent tasked with going to Russia, saving a scientist, stopping arms deals, preventing nukes from being put in the wrong hands, and stopping Chechnyan rebels. It seems like a lot for one man, even if you are Rick Halsey, so he assembles a team in classic team-assembling fashion. He draws from his retired Special Forces buddies, and the team of dudes bein’ dudes use their combined machoness in an attempt to save the day. But can they do it?

Jeno Hodi, you magnificent bastard. You’ve done it again. As the director - nay - cinematic mastermind behind the classic American Kickboxer 2 (1993), or AmKick2 as nobody calls it, he will always have a special place in our hearts. His off-kilter directorial style has, in the past, warranted entertainment and/or laughs, if nothing else. And while you might think Special Forces (or Black Sea Raid, its other title, not to be confused with the Isaac Florentine Special Forces (2003) which came out only a short three years after Hodi’s movie) might be a standard Nu-Image-style military slog, think again. While elements of said sloggery are indeed here in strands, the overall takeaway from this movie is that it is an absurd good time, and its supposed weaknesses are actually strengths. 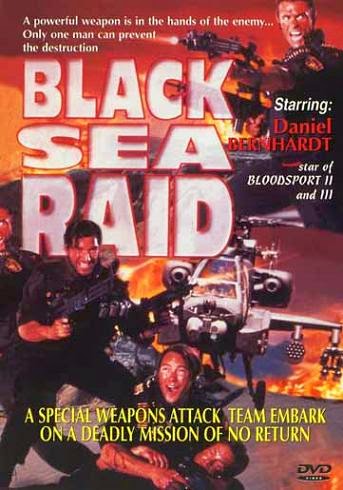 Here’s what we mean by that: while, amazingly, this movie came out in 2000, it looks like it was shot in 1991, if not earlier. Even the sound SOUNDS old, with dialogue that sounds like it was recorded on scratchy old Edison cylinders. When Hodi and his team went to the former Soviet Union to shoot the movie, he was probably using the best and most up-to-date equipment they had.

If Special Forces was supposed to be a period piece from years before, it would have succeeded brilliantly. So yes, it does have a “junky” look and sound, but we would argue that, in this case at least, it all adds to the fun. You don’t rent/buy this movie looking for the works of Ingmar Bergman. We’re looking for Daniel Bernhardt to shoot, kick and blow up people amongst a panoply of strange edits. Let’s not kid ourselves here. And that is exactly what’s delivered to our VCRs. So Special Forces is not a failure, it’s an entertaining success against all odds. So take that, haters.

And what’s not to love about Bernhardt’s funny yellings, a handful of surprise Punchfighting scenes, exploding helicopters, some hilariously half-hearted sideways guard tower falls, and the amazingly cliched one-liners from his team, not the least of which is Comeuppance personal favorite “we got company!”. So don’t be afraid of Special Forces. Just go with its flow, and you’ll surely find it enjoyable.

Indeed this is silly fun, not as good as the other Special Forces, but still pretty good.

We agree, they're both a lot of fun. Bernhardt and Adkins should team up.

I agree. Before watching the movie, I thought that a Daniel Bernhardt movie from 2000 filmed in Eastern Europe couldn't be good. Fortunately, I was wrong. Yes, the sound and picture quality is "Eastern European" for lack of a better word, but there's loads of action. I recall that the movie was actually filmed around 1995, before the Bloodsport sequels, as was Future War.

We are in agreement. This was surprisingly good! Lots of funny and fun moments. Bernhardt delivered.

It's interesting when films are held back several years before getting released, one interesting examples is "Crackdown"

Cool! Will have to check out Crackdown. What a gap between releases.