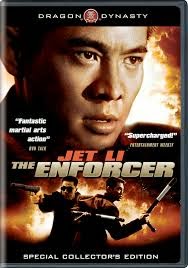 Kung Wei (Li) is a loving husband and father, but has to spend a lot of time away from his family because he “has a rapport with these underworld types” and is now deep, deep undercover in an attempt to stop the gang of Po Kwong (Yu), a criminal mastermind with an army of thugs. Wei has an especially strong bond with his young son Johnny (Tse), who, like a pint-sized version of his father, is a Martial Arts expert.

When Wei’s wife becomes sick, the pressure on him becomes even greater while he’s away from his family, and Johnny strikes up a friendship with a female cop named Fong (Mui). While Wei is undercover in Hong Kong, Fong and Johnny follow him there from mainland China. Then the stage is set for the ultimate confrontation: who will be victorious? Find out today...

Moodily directed by Corey Yuen, a man whose career as an actor, director and stuntman is simply amazing, and who has been kicking all our butts since Above the Law (1986), he seems to be going for more of a balance between emotional drama and action. While nothing seems out of place, as might be expected the highlights of this movie are the fight/action scenes. There are some really impressive moments, and when the energy is there, it’s amazing to watch, but there are certainly some peaks and valleys we as viewers must go through. Not that that is necessarily a bad thing, in fact it may make the action scenes stand out all the more. 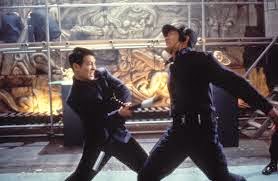 Thankfully, this movie does have a blonde meathead screaming while shooting a machine gun. So yes, it is truly a work of dramatic art. You know Po Kwong is a villain because he wears his sunglasses at night (and at all other times too), and he and his gang of baddies really put the tot Johnny through hell. Johnny has to go through all manner of trials and tribulations, perhaps even more so than his father does. Many of those things wouldn’t fly in America, even in a movie they’d be considered politically-incorrect child abuse.

There’s even a scene of Johnny being bullied at school: apparently Johnny is a big ant aficionado, and can even train his ants to spell words like “mom”! When some bullies try to break up his ant party, he stops them in the only way that works: fight back! So there are some good lessons here too.

The Dragon Dynasty DVD is typically excellent, with many features and a crisp, clear transfer. One of Wei’s underworld contacts is subtitled as “G-Dawg”, so perhaps there were some concessions to the American market (???) - but at least there aren’t any misplaced musical cues like in the U.S. DVD version of the Jet Li outing Contract Killer (1998). In the end, fans should appreciate the killer fight scenes, action moments, and stunt work, while non-action buffs may appreciate the dramatic content. So the appeal here is pretty wide.

I agree. The Enforcer has its peaks and troughs, but is still a solid effort, like most of Jet's 80s/90s HK output. His recent movies have been really bad, though.

Jet Li has made some killer movies. Loved Fist Of Legend. War had it's moments, but the Forbidden Kingdom was weak.