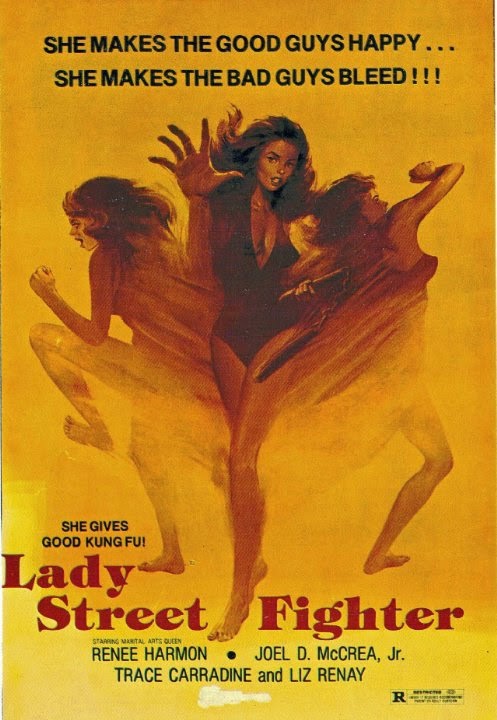 
Linda Allen (Harmon) travels from somewhere in Europe to Los Angeles to get to the bottom of the torture/murder of her sister. She becomes embroiled in a tangled web of evil gangsters, killer pimps, shady FBI agents, and downright strange partygoers. But who can Linda trust? Luckily, her wits and Martial Arts skill (?) should get her to the bottom of things. Will Linda ever casually wear a gold jumpsuit again? Find out today!

Like most people who have ever seen her in anything, I am a confirmed Renee Harmon fan. She’s impossible not to like. Her thick German accent isn’t unintelligible; it says “I’m not going to let this stop me from achieving my dream of being in American movies”. There’s something charming and likable about her, as I’ve witnessed in Frozen Scream (1975) and the must-see Night of Terror (1986). So imagine my delight when I saw her in Lady Street Fighter - AS the lady street fighter in question - punching and kicking the bad guys and getting into a bunch of highly silly shootouts, car chases, love scenes and fights.

Adding to the fun are some hilariously abrupt film and sound edits, some wonderfully wooden line readings, and inexplicable dubbing. On top of that are two main musical themes: one Spaghetti Western-influenced, the other positively Kraftwerkian. And there’s even a “sexy” undercurrent to it all.

Apparently the film was shot in 1975 and not released on VHS until a full decade later. Interestingly, Frozen Scream is also from ‘75 and that was the first year Harmon appeared on the scene. She really exploded out of the starting gate with these two films. While the Kung Fu movie craze was in full effect then, with plenty of aspiring Bruce Lee’s out there, it may seem somewhat counterintuitive to make the heroine of such a film a 48-year-old German lady. But that’s all part of the fun. Plus, it’s better than Policewomen (1974) or the Ginger series.

Besides, Harmon was a true trailblazer in that respect. Now we fully accept heavily-accented action stars such as Schwarzenegger and Van Damme. But Harmon did it first. And backwards and in high heels, as the saying goes. Her accent, while charming, does seem to get worse as the movie goes along. Is that possible? But she also wears a lot of great outfits and gives it her all. And she really loves celery, as we see in the centerpiece of the film, the party scene. It’s here she meets a girl named Inez, and gives her highly sensitive and medically-accurate diagnosis of her mental state. Interestingly, the spectral character in Night of Terror, one that is very important plotwise to that film, is also named Inez. Could that possibly be a coincidence?

Not to be confused with being a part of the Sonny Chiba Streetfighter series, Lady Streetfighter is distinct in its own right. And at only 73 minutes, you can’t afford not to watch it. After the end credits, it promises, “watch out for the return of Lady Streetfighter!” Sadly, this never came to pass, as this was director Bryan’s last film. (And third collaboration with Harmon, after Hell Riders and The Executioner, Part II). He also directed Don’t Go in the Woods, for those that don’t know).

So have as much fun as the partygoers in the film that are continually shouting “Toga!” and see Lady Streetfighter soon.

Also check out write-ups from our buddies, The Video Vacuum and Bleeding Skull!

This film was originally filmed in the late 70s but took years to get an official release.