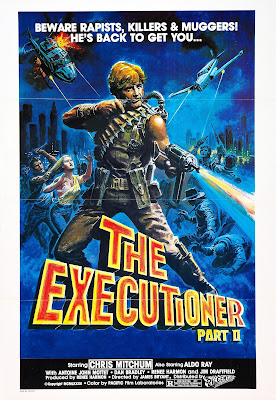 A vigilante the press have dubbed “The Executioner” is running around L.A. dealing with punks in his own inimitable way. When Police Commissioner (Ray) (that’s all he’s billed as) demands answers, Lt. Roger O’Malley (Mitchum) is on the case. Meanwhile, O’Malley’s daughter Laura becomes addicted to drugs, and, needing money, turns to her loud-voiced, giggly friend for help.

She naturally suggests she go into prostitution, but to watch out for a sadist named “The Tattoo Man”, who may abuse her in the process. Some sort of gangsters are involved and putting pressure on the local pimp, and only a delusional Vietnam vet (is there any other kind, according to low-budget actioners?) holds the key to it all. Will O’Malley stop the O’madness? Or will he let it continue as long as The Executioner is cleaning up the streets? Find out today!

The Executioner, Part II is a gem. Essentially a 78-minute, incoherent, incomprehensible mess, it’s easy to love a movie that’s this disjointed and sloppy. In the grand tradition of Surf II (1984) and Leonard Part 6 (1987), there is no Executioner, Part I (just the fact that there’s a comma, a space, and a “part” after the title is a major clue to the insanity/inanity going on). Clearly the structure (?) of the movie was modeled after The Exterminator (1980), complete with a Vietnam-set battle intro, which segues into a modern urban environment. It seems so obvious that 21st Century Film Corporation was trying to trick distracted theater patrons/video renters, but, hey, it was the golden age of exploitation, and if this is the end result, it can’t be all bad. 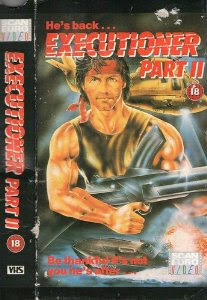 Try to imagine a cross between Rescue Force (1990)and Death Promise (1977)- complete with straitlaced, unnecessary narration, poor lighting, non-editing, and the star of the show - the dubbing. The dubbing this time around is laugh out loud funny. TE, PII (as all the cool people call it) is one of those “another planet” movies - the filmmakers seem so out of touch with the way human beings actually talk and behave, it seems like it was made in some far-away world.

This was director James Bryan’s first in a trilogy of films he did with the great Renee Harmon - the follow-ups being Hell Riders (1984) and Lady Street Fighter (1985). Brilliantly, the movie was released on a big-box double feature VHS with Harmon’s Frozen Scream (1975). Apparently Continental Video was really gunning for that rich mine of Renee Harmon fans. Well, we still remember it fondly. Only in the 80’s, we tell you. Only in the 80’s.

Fan favorite Chris Mitchum is in full effect here as well. Sporting dark hair and a dark mustache, he fights Middle-Aged Punks (MAP’s) with the best of ‘em, featuring some of the best (?) fight choreography in recent memory. He even has what has to be the first beeper of all time. But while the Executioner has an ace up his sleeve in the way he deals with the epidemic of punks, the punks have their own means of intimidation - pouring milk on people’s heads.  No wonder Aldo Ray wants answers.

Featuring one of those classic, funky soundtracks (much like the aforementioned Death Promise), The Executioner, Part II certainly marches to the beat of its own whacked-out drummer. There comes a point when cinematic ineptness becomes a treasure. This is that point.

Also check out a write-up from our buddies, Cool Target and Bleeding Skull!

This site is awesome. I'd love an edition of it, in a book format i mean.
A big volume with all the reviews!

The only thing i would love if a list of the movies reviewed according to the rating could be added.

We did reach out to a bunch of publishers to put the site into book form but got nothing but rejections. Do you know anybody in publishing who might be interested? We do have a 4 star and 3 and a half star review tag.

Thanks for reading the site, we appreciate it!

Comeuppance Reviews has been included in our Sites To See #451. Be assured that we hope this helps to point many new visitors in your direction.

Thanks! We really appreciate that.

Man, I tried so hard to like this one, but I couldn't even finish it. LOL. It was awful.

Lol! Totally understand that. It's no Exterminator. A great team-up would be The Executioner and The Exterminator fighting crime.