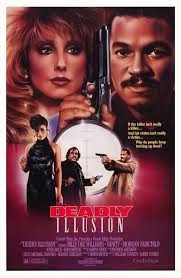 Hamberger (BDW) is a Private Detective living it up in New York City with his girlfriend Rina (Vanity). He’s contacted by a mysterious man who offers him $100,000 to murder his wife. Intrigued, Hamberger does some recon and decides to just go and meet the woman in question. After meeting Sharon Burton (Fairchild), an entire can of worms opens for The ‘Berger, as double-crosses, murder and mayhem ensue. Will Hamberger live to sizzle another day?

We were less than impressed with Deadly Illusion. Maybe it was due to the “two-director” syndrome - evidently the great Larry Cohen was replaced with William Tannen, the director of Hero and the Terror (1988) and Inside Edge (1992) - but the results are ultimately lackluster. To be fair, the action elements herein are very much muted; it’s more of a film noir-influenced mystery-thriller. But you take the cast into account, and you can’t help but feel this should have been so much more.

BDW is as smooth and suave as ever, and his narration is indeed charming. After watching Deadly Illusion, it’s easy to see why legions of Americans went out in droves and purchased pallets of Colt .45.  But there’s a lot of cheesy humor in this movie, and a lot of it has to be delivered by Mr. Williams, and we personally found it weird to see him in that kind of role - if the film was a bit more straight-faced, the one-liners would have had more oomph.

Vanity and Fairchild provided their classic female B-movie support roles, and the good news is that fan-favorite Joe Spinell is on board. The bad news is that it’s only a cameo, and they spell his name wrong in the credits. With more Spinell, the movie as a whole could have moved up another rung on the ladder. 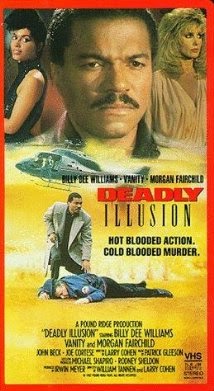 That’s kind of indicative of the overall vibe of “missed opportunity” of Deadly Illusion. Plus, there was so much competition in video stores at the time - how could this movie compete with the far-more-awesome-yet-still-kind-of-similar Action Jackson (1988)? Or even Fortune Dane (1986) for that matter? The makers of Deadly Illusion should indeed have gone the Fortune Dane route - make it a 50-minute TV pilot and maybe, if it’s developed further, put episodes out on VHS - because that format would have worked better here. Being that it’s boring and slow in many spots, 90 minutes or so seems like an unnecessary amount of Hamberger to take in one sitting.

It does have that “It’s 1987 in NYC” kind of vibe, which is welcome, and there are plenty of shots of the World Trade Center towers, which we always like to point out and celebrate. There’s even a scene of BDW and Fairchild eating in a restaurant where the towers are directly over her head, even looking like antennae popping out of her skull. At least that’s better than this silly dark-haired wig she dons at other various times, and maybe that’s the true “Illusion” here.

Featuring the catchy end credits song “Illusions are Real” by Stephanie Spruill, despite a couple of bright spots, perhaps unsurprisingly for this troubled production, Deadly Illusion doesn’t really hang together and is an unsatisfying viewing experience.

What a shame! Just with the talent involved, you'd think it would be a slamdunk. Larry Cohen! Billy Dee! Vanity! Fairchild! Aw well, can't all be great I suppose. Great review guys!

Can't agree more. We thought this was going to be a winner.

I actually kind of prefered this film over Action Jackson myself.

Have to disagree, Action Jackson is way better than Deadly Illusion.