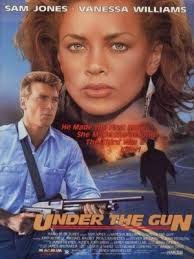 
Mike Braxton (Jones) is a rough-and-tumble St. Louis cop who is distraught after his partner dies during the course of what they initially believed was a routine investigation. But Braxton soon discovers his problems are about to get much bigger. His brother, Tony Braxton (Cassavetes), who we believe had a hit with “Un-break My Heart”, gives Mike a desperate call from L.A. and tells him he’s in deep trouble. It seems Tony was involved in illegal plutonium trafficking, and now the goons of the nefarious Simon Stone (Russell) are after him.

Mike comes to L.A. and all hell breaks loose, with Stone unleashing his arsenal of goons on the unkillable cop, such as Frank (Halsey), Leon (Tarkington), and Joey (Stark), among others. Meanwhile Mike has to protect Samantha Richards (Williams) from the flying bullets and rocket launchers. Will they get out from UNDER THE GUN? Find out today…

Not to be confused with Under The Gun (1995), starring, and we quote the DVD box, the “likable action star Richard Norton”, THIS Under The Gun also features a likable action star, in this case Sam Jones. In the pantheon of 80’s action stars, we would rank the coolness of hair as follows: 1. Michael Dudikoff 2. Dolph Lundgren 3. Sam Jones. Having the third coolest hair of the 80’s action stars is no mean feat. (Feel free to leave a comment if you disagree with/want to add more to this list). Mike Braxton is the type of man who doesn’t back down from a fight, and there are plenty of cool action bits to keep fans entertained. 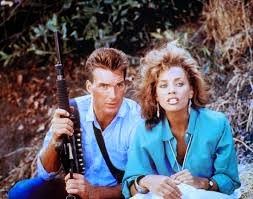 The baddies seem to have a larger-than-usual proclivity towards rocket launchers, which we certainly applauded, and Sam Jones gets some nice “hero shots” which cast him in a very valiant light. By contrast, Vanessa Williams plays the classic “complaining woman” and isn’t that likable. This clichéd role/performance was unfortunate and hurt the movie, but not enough for us to not recommend it.

The sax/wailing-guitar soundtrack was entirely appropriate to the proceedings, and the fact that the illegal plutonium is being transported in a Robotech lunchbox adds to the interest, especially for 80’s fans like us.

And that’s just the thing, there were so many movies like this on the video store shelves of the 80’s and 90’s, it seems Under The Gun got lost in the shuffle. But the whole thing is well-paced and entertaining, so we can chalk up another winner to Sam Jones, one of the more reliable names of the day. This one only enhances his reputation. Featuring the catchy and energetic songs “Talkin’ Bout Love” by Debra Laws and “Paralyzed” by Brenda Reierson, despite a couple of minor flaws, we can put Under The Gun in the winner’s circle.

Comeuppance Review by: Brett and Ty
Posted by Ty at 1.3.15

Yet another stellar review. Nice work on this. The Un-break My Heart joke was awesome!

Few things: Yes, Dudikoff far and away had the best B-movie action hair of all time. Thanks for recognizing that fact. Good call with Dolph. JCVD has to be in the top 5. He had some sweet mullets. Although the guy from Samurai Cop has to be in the conversation, too.

I don't know if it was intentional or not, but to not have a single Flash Gordon joke (or pun) is commendable. I don't think I could have resisted the temptation.

Again, nice job on this.

Thanks for the kind words.

Dudikoff has killer hair. You're right, Matt Hannon from Sam-Cop, should be in the running. Haha.

Hhmmm, definitely going to check this out!