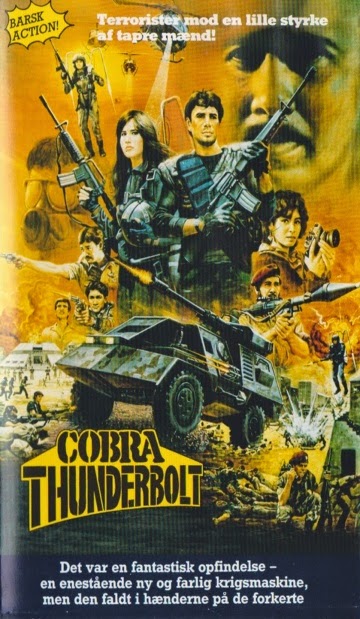 A bald, wheelchair-bound man named Col. Dave has given his all for his army and his country, including the use of his legs. He “worked with the Americans in Laos” during the Vietnam war, and he has a lot of painful flashbacks to his combat experiences. However, Col. Dave is an inventor, and he’s put a lifetime of military knowledge behind his latest invention, a supertank known as the Cobra Thunderbolt.

Because it’s the most badass tank ever, baddies, led by the illegal arms trader Kang Wan (at least that’s what we think they’re saying) want the tank. Col. Dave doesn’t budge, so they kidnap his wife. Along with his daughter, the beautiful Lt. Molly - which might be the coolest name for a daughter in recent memory - and a combat cohort named Dick, the three of them go after the bad guys the only way they know how...with their combined military prowess and the COBRA THUNDERBOLT! Will they be successful? Find out today...

Cobra Thunderbolt is the only known writing/directing credit for one Tanong Srichua. The rough-and-tumble charm is evident from the jump, and the homemade nature of everything from the car stunts to the acting is impressive - there probably weren’t a ton of resources in Thailand in 1984 to make a movie of this type, but that didn’t stop Tanong and the gang from making an action movie with plenty of blow-ups and other goodies, not the least of which is the killer tank. We admire the ambition, and we wish he had done more.

We really began to love Col. Dave and Lt. Molly. With names like that, how could you not? Col. Dave really should win father of the year. While other dads are fretting about making sure their kids wear kneepads and helmets to ride their bikes, Col. Dave trains Molly in how to shoot a machine gun while flying in the air riding a jetpack.

The Cobra Thunderbolt itself - in conjunction with Lt. Molly’s jetpack and the fact that the main baddie is an arms dealer - will lead you to believe the strongest influence on the movie was the 80’s cartoon/toy line G.I. Joe: A Real American Hero. If, back in the 80’s, there was a live action version shot in Thailand, this might just be it. 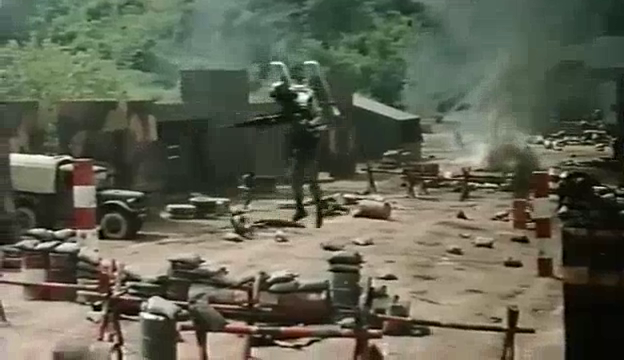 There’s a ton of funny dubbing, characters complain about how M-16’s don’t work in the rain, the Cobra Thunderbolt’s primary camouflage is to emit bright purple smoke, official government buildings have prominent Snoopy posters, and Dick won’t drive the Cobra Thunderbolt without wearing an Oakland Raiders football helmet. Even in Thailand in the 80’s, people still said “We got company!”, and the soundtrack is a lathering waterfall of synths.

The only real downside here is it gets a bit talky at times, but that’s a minor quibble when you look at the bigger picture. Which is clearly a badass supertank blowing the crap out of everything in sight while Lt. Molly shoots a machine gun while wearing a jetpack. Just to be perfectly clear.

‘Thunderbolt was made and released by Davian International, the company that is largely responsible for the career of Dale “Apollo” Cook. This movie was released before they found their main star and muse. Criminally, it was never released on VHS in the U.S. back in the golden era of video (or ever, for that matter). It did find release in Greece, Canada and, of course, Japan. Japan’s box art is typically killer - how could you not want to see the movie after witnessing the box art?

In the end, Cobra Thunderbolt is certainly worth seeing, especially if you appreciate exotic foreign takes on the action spectacle.